“I don’t suppose that it is strictly sportsmanlike, but baseball is a strenuous game, and there are times when a man may feel sorely tempted.” – Detroit Tigers Manager Bill Armour, 1906

“Dishonest signal stealing might be defined as obtaining information by artificial aids. The honest methods are those requiring cleverness of eye, mind, and hand, without outside assistance.” – Hall of Fame Pitcher Christy Mathewson, 1912

Explain that to me.

In August, the New York Yankees snitched on the Boston Red Sox who were stealing signs, using Apple watches to signal the Yankees catcher’s signs to the Red Sox dugout. 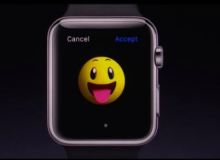 Here’s what I don’t get.

A Red Sox staffer, watching the game on video in the clubhouse, decodes a sign from the Yankees catcher, texts it to the Apple watch of a trainer in the dugout, who gives the message to a nearby player, who signals to the Red Sox runner on second, who relays the pitch by some signal or other to the batter.

They had time to do all that? Maybe the game really is that slow.

The Red Sox fessed up and then counter-snitched on the snitchers with their own photographic evidence that the Yankees were stealing signs, too. 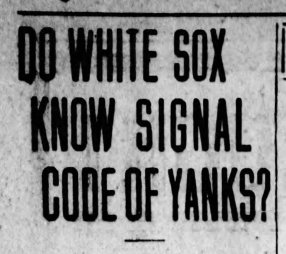 The Red Sox weren’t the first Sox to decode the Yankees.

A few sign-stealing stories for you.

Best Joke Of The Week

I wish I could remember who first told this joke on Twitter.  I polished it up, so I get part credit for that. But, in a post about stealing things, I don’t want to be seen as a Tweet-stealer.

Reporter: So, were the Red Sox stealing signs?

Red Sox Manager John Farrell: Not on my watch.

Reporter: So they weren’t stealing signs?

In his book, Francona, The Red Sox Years, Terry Francona tells this story from his time as the Red Sox manager:

During the 2004 World Series, Red Sox slugger Manny Ramirez was at bat and got into a heated argument – in Spanish – with Cardinals catcher Yadier Molina. The umpire signaled for Francona to come out of the dugout and help calm things down.

“Manny, what’s this about?” Francona asked.

Francona laughed and turned to the umpire. “Manny doesn’t even know our signs!”

Then he turned to Ramirez. “You don’t know our signs, do you Manny?”

One general manager, unnamed, told a reporter last week, “Everyone does [it].” It was the brazenness of the sign stealing – and the Apple watches – that did in the Red Sox.

But, they weren’t nearly as brazen as the sign-stealing 1899-1900 Philadelphia Phillies. 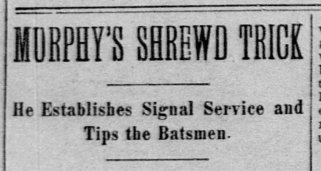 “There was a clever little catcher named Morgan Murphy who was smart and quick and who grew too fat to catch,” sportswriter Hugh Fullerton recalled a few years later. Murphy hatched a plan to sit in the center field clubhouse with field glasses, pick up the catcher’s signs, and signal back to the Phillies third base coach, Pearce “Petie” Chiles, who would then tip off the batter.

The initial signals were primitive – from the window in his outfield room Murphy would hold a rolled newspaper sideways for a curve, straight up for a fastball, or move a window awning up or down. For road games, he would rent rooms in the other parks where he could get a good look at the catcher.

You may think I picked out a fuzzy photo of Morgan Murphy to illustrate what a sketchy person he was. Maybe I was being clever. (Or, maybe, this was the only photo of Murphy I could find.)

The Phillies were found out, other teams knew they were stealing signs, but they couldn’t beat Murphy. 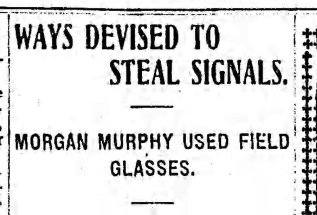 When a Louisville Colonels catcher caught on to the Phils getting his signs, he stopped signaling pitches at all. Murphy sent a boy to the dugout to tell the team there were no signs. The Phillies eventually realized the catcher was signaling for a curve by smiling at his pitcher.

Jack Warner, the Giants catcher, tried to outfox Murphy with mouth signals, eye blinks, and even getting the third baseman to give the signs. But, Murphy would figure it out.

Only catcher Wilbert Robinson of the Baltimore Orioles outsmarted Murphy. He would crouch down and place his palms together, prayer-like. A little sunlight between his hands, curveball. No light, fastball. He was so quick that Murphy couldn’t see the light through his field glasses. (The Phillies eventually placed a player in the grandstand where he could see the light.)

Everybody knew they were doing it. 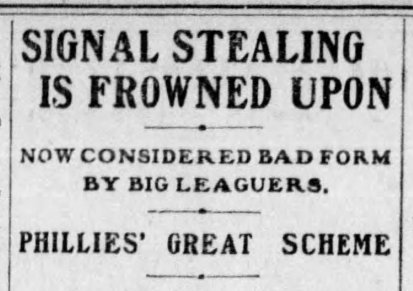 Sometime during the 1900 season, Murphy and Chiles stretched a wire from the center field clubhouse, pressed it under the turf, and connected it to a cigar box rigged with a battery and telegraph tapper which they buried under the third base coaching box. The tapper would jolt Chiles in the foot when Murphy pressed a buzzer in the clubhouse to signal the upcoming pitch.

In September, the Cincinnati Reds finally figured it out – Chiles’ constantly quivering leg was the giveaway – stopped the game and dug up the box. Phillies players, the groundskeeper, and, in some reports, the police, converged on the Reds to try to stop them.

The Phillies buzzer scandal clearly didn’t end sign stealing in baseball, it didn’t even stop the Phillies, who were caught a few weeks later doing it again.

But it ultimately did in Murphy – who disappeared after the season – and Chiles – a career con man who wound up in prison the next year (and may, or may not, have escaped).

“And the funny part of it was that our batting was really our undoing,” Phillies pitcher Red Donahue told a reporter in 1906. “The fellows wouldn’t play the game, but thought only of whacking the ball. Bunts, team work in the field, base running – it was all forgotten. We made 200 runs more than any other club in the league, but finished third.”

“The Giants Win The Pennant!”

What if the Giant’s Bobby Thomson’s home run in 1951 off of the Dodger’s Ralph Branca — “the shot heard round the world” that sent the Giants to the World Series — was thanks to a stolen sign?

Coulda been, because that season the Giants had their own sign-stealing system.

If you haven’t had enough baseball cheatery, then read Joshua Prager’s excellent The Echoing Green that uncovers and unfolds the entire thing, while telling the story of how Thomson and Branca, entwined together forever thanks to that one at bat, came to terms with it and the sign stealing — together — later in their lives.