You would think that someone who cares deeply for baseball’s rich history would thoughtfully choose which players she highlights and celebrates.

You would think that she wouldn’t just see a player named “Highball” and think, “Oh my God, a pitcher named Highball. I’m gonna have to write about him.”

Here Are 12 Things You Should Know About Highball Wilson.

Sadly, but not surprisingly, Highball Wilson was not named Highball by his parents. Highball Wilson, a righty pitcher, was born Howard Paul Wilson in Philadelphia on August 9, 1878. (I realize that this would be a far more interesting post if his parents had named him Highball, and I’m sorry if you feel duped.)

(Highball Wilson was one of five future big leaguers born in Philadelphia in 1878. Only Highball played more than one season.)

So, who named him Highball?

I don’t know. The origins of Highball’s nickname seem lost to the ages. He isn’t called “Highball” by the press during his major league playing days, best I can tell. Did it refer to his drinking or to his pitching? While pitching for Washington in 1903 and 1904, he is often referred to as “Abe.” Same guy. Different nickname. And, I don’t know why they called him Abe, either.

Should all this Highball talk make you thirsty, you can whet your whistle with a vintage highball, the way it was enjoyed in Howard “Highball” “Abe” Wilson’s day. 2 oz. whiskey, 2 oz. soda water, 1 ice cube. “That’s all.”

Should you use Wilson Whiskey, your highball becomes a Wilson Highball, named in honor, it’s said, of President Woodrow Wilson and not Highball Wilson.

Highball Wilson played in his first big league game on September 13, 1899 – pitching for the hapless Cleveland Spiders. He lost that game, against his hometown Philadelphia Athletics, 8-2. (The Spiders would win just 20 games that season – losing 134 – making them the loser’iest major league baseball team of all time, so Wilson’s loss was pretty much on point.)

It was Wilson’s first and only appearance with Cleveland.

Wilson won’t appear in another big league game until 1902, when he joins his hometown Philadelphia Athletics and appears in 13 games.

Wilson’s first win as a big league pitcher comes on July 14, 1902, when the Philadelphia A’s defeat the Boston Red Sox 4-3 in 10 innings. Wilson pitches all 10 and is cited for his control and for being calm under pressure.

“Wilson showed the coolness of a tried campaigner, never displaying the slightest worriment, no matter how critical the situation.”

An umpire tells The Philadelphia Inquirer that Wilson “was about the coolest proposition he ever encountered.” 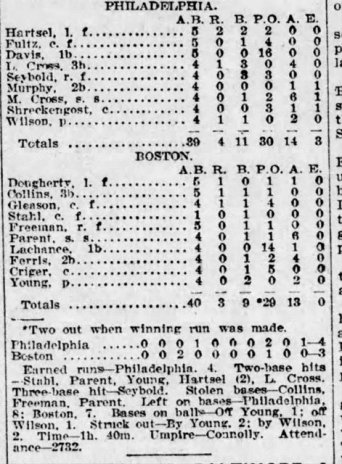 Cy Young won a league-leading 32 games in 1902. His mid-season loss to Wilson was one of only 11 losses that season.

Highball Wilson spends the 1903 and 1904 seasons with the Washington Senators.

While it certainly didn’t bestow the same honor on pitchers as it does today, Wilson was Washington’s Opening Day starter on April 14, 1904. So many rooters squeezed into the new Washington park on Opening Day that the overflow of fans were spread out into the outfield.

Washington will lose that game to the Athletics 8-3. Wilson will lose two more games that month – a loss to the Red Sox on the 18th and the New York Highlanders (Yankees) on the 25th.

Wilson’s not the only Senator pitcher losing. The Senators will start the season 0-13 and won’t win their first game until May 5.

Highball Wilson appears just one more time in a major league game. On May 17, 1904,  against the White Sox, Wilson comes in as a pinch hitter in the ninth. He doubles to right. The Senators lose anyway.

(In June, Washington refuses to pay Wilson until his arm improves. He leaves the team on the grounds that he has been treated poorly and retains a lawyer to sue for back pay. Things eventually get worked out and Wilson returns to the team later in the season, but does not appear in a game.)

Wilson is small – 5’9”-ish – and injury-prone. When newspapers do mention him – which is seldom – reporters will call him “diminutive,” and note his “glass arm” and bad knees. He is known for being “clever” on the mound, rather than dominating; his pitches are best described as “floaters.” While playing on a Philadelphia YMCA team in 1901, nursing a leg injury, he pitches standing on one leg. (I realize that pitching while standing on one leg should have been noted much earlier, but thank you for reading this far.)

Wilson goes “missing” in October 1903 – between his first and second season with Washington. He leaves Washington on September 30 headed for home in Philadelphia and carrying between $600 and $1,000 in cash. When he hasn’t shown up two weeks later, his father contacts the police, believing he has been robbed and murdered.

This story gets scant attention – apparently people went missing in DC all the time back in 1903 and Wilson was no celebrity. His “safe and sound” discovery is never reported, but as I’m sure you’ve figured out, Wilson was not murdered, as he next shows up in March 1904 as a university pitching coach – more on that in the next section – and, as noted above, in Washington Senators box scores in April. Whew.

In March 1904, prior to joining Washington’s spring training, Wilson is tapped to coach the University of Pennsylvania’s pitchers. He is said to have done a good job. (In April, UPenn, behind stellar pitching, will defeat the University of Virginia twice – 7-1 and 10-1.)

In 1910, six years after his last major league game, census records report that Wilson is 31, single, living with his parents in Philadelphia, and working as a clerk in a cotton mill that also employs his father.

Howard Wilson died in Havre de Grace, Maryland on October 16, 1934 at age 56. No cause of death is reported. His funeral is in Philadelphia. His death notice in The Philadelphia Inquirer lists no spouse or children.

Highball Wilson played in 47 games over four major league seasons. He won 14 games and lost 26, with a career ERA of 3.29.

Of Wilson’s 14 career wins – seven with Philadelphia in 1902 and seven with Washington in 1903 – he will defeat Cy Young twice, including that game I mentioned in July 1902 and again on August 1, 1903, when Wilson will throw a 5-hit shutout for the Senators in a 1-0 win over the Red Sox.

Thank you to v of Verdun2’s Blog for allowing me to continue his “12 Things” posts while he is on break.

11 thoughts on “12 Things You Should Know About “Highball” Wilson”