My mom’s last words to me were “Love you.”

That was seven years ago and she died – somewhat expected-unexpectedly – soon after.

I was her only child and we talked by phone every day. Those final words are especially comforting because we didn’t know that call would be our last.

She wasn’t very happy with me that day. But, no matter how angry we were with each other, or frustrated, or resigned to the other’s insolence, stupidity, or stubbornness, we always ended every phone call with “Love you.” “Love you, too.”

1) Jose Altuve. My mom was nearly 5’11”. She enjoyed being taller than most everyone in her world. (“I don’t know how you ended up so short,” she would say to me since I’m just 5’6”. “Your weak gene pool,” was my answer. This would get me the silent treatment for a few hours.)

But, my mom would have loved Houston Astros second baseman Jose Altuve, because, although just 5’5”, he excels in a sport meant for taller, bigger, beefier players. She loved it when an underdog made good.

She would love to see Altuve do this …

“How about this for the little guy!”

When he slammed into an uncushioned wall at Yankee Stadium on Friday night, banging himself up badly, his words to his manager were only, “I should have caught that ball.” 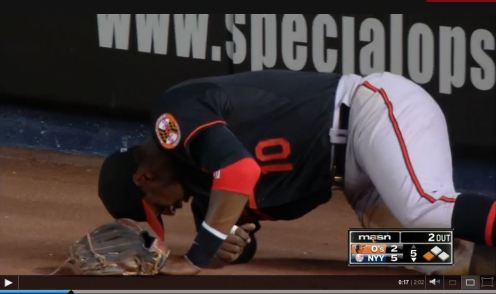 My mom had a rare medical condition that kills most people it affects, but she lived with it for nearly 40 years. She lived in a lot of pain, but she rarely let on and never let it limit her. (She’s probably a little pissed that I’m even telling you this. But, now that I have, she would insist I also tell you that it wasn’t what killed her.)

She would love a gamer like Jones who could shake off a collision, not complain, and just keep playing.

3) Girls Playing Baseball. My mom was pretty clear on this – girls should have the same opportunities as boys. Period.  My mom was all for women Presidents, women priests, and women playing sports at the same level as men.

Had she thought much about it, she would have been insulted to learn that girls are encouraged to play softball because it’s believed they aren’t up to the rigors of baseball. She would be all for girls playing baseball just to stick it to the idiots who think they can’t.

(I’m pretty sure she would enjoy the fact that blogging about baseball is mostly a guy thing, but I’m doing it anyway.)

NPR’s Only A Game shared a story this week about “Baseball For All”, a girls baseball academy.

4) This Blog Post. When I was in, I think, seventh grade, my mom was in a snippy mood one day early in May and said to me, “I don’t want anything from you for Mother’s Day.” I made the mistake, born of innocence and youth, to believe her. I took my allowance, went to Woolworth’s, and bought myself a record with the money I had set aside for her gift. This, as I’m sure you have guessed, was a mistake. I eventually realized that “I don’t want anything from you” was mom code for, “Don’t you dare forget this holiday.”

I haven’t missed one since. This is for mom. Love you, too.