They don’t happen much. The Society for American Baseball Research has tallied just 699 major league triple plays since that first one.

Because, I’m told, no one watches Houston Astros games, #700 might have gone unnoticed.

It’s a mighty pretty “around the horn” 5-4-3 triple play. It’s worth watching simply to see the magnificent Jose Altuve turning that play on second. Watch here.

The Astros went on to defeat the Detroit Tigers 3-2. It was the Astros first triple play since 2004.

The Pittsburgh Pirates also turned a triple play this season. On May 9, their triple play was the first 4-5-4 triple play in baseball history. Watch here.

While triple plays are rare, there have been only two seasons since 1876 that had no triple plays at all – 1961 and 1974. (If you think I went through all 700 triple plays one by one to find that single fact for you, you are correct.)

And, your Sunday bonus … the hidden ball trick!

In the semifinals of the Colorado Class 2A High School Baseball Championship on Saturday, the Rye High Thunderbolts executed a perfect hidden ball trick to end the game. 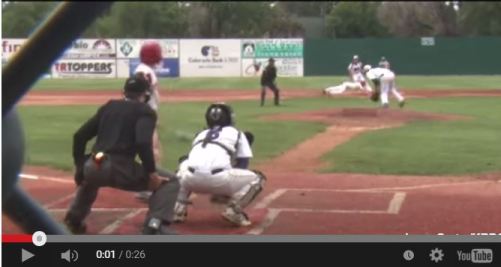 With two outs and the tying run on second in the ninth, the Thunderbolts pitcher fakes a high pick-off throw to second. The second baseman and outfield further the grift by pretending to hustle after the “errant throw.” The runner on second takes the bait and takes off. The pitcher runs over and tags him out with the ball still in his glove. Game over. Watch here.

“We weren’t real sure if it was going to work,” according to Rye Coach Stacey Graham. “We practice it quite a bit and we ran it one time successfully, and it worked again. It’s a tough play to do and the guys executed it real well.”

Rye High, a tiny school with just 225 students, won the game 9-8 and went on to win the state championship later that afternoon.