Here are some things The Baseball Bloggess can no longer do.

One can be remedied with cheap drugstore reading glasses and I have 11 pairs lying around the house in case of a vitamin emergency. Two, I never could do that. (But, I’m touched that for five seconds you thought I could.) Three, well, if your team plays the late game in the College World Series, bedtime can be an inconvenience.

But, that doesn’t mean I can’t get up at 5 a.m. to watch the post-midnight DVR’d parts of last night/this morning’s University of Virginia vs. Florida game.

I wasn’t the only sleepy one.

Let’s get to it. UVa won, continuing its miracle run of playing much better (much, much, much better) than it did through the regular season.

Since you might not have made it to 2 a.m. either, watch the recap here.

Now, rewind to 3:12 and re-watch the 8th inning highlights and the come-backer to UVa closer Josh Sborz. The one that ricocheted off his glove and sent the glove flying. The one that came with no outs and the tying run on third, the go-ahead run on first, and the go-ahead-even-more run at bat.

Times like these call for a visit to the mound. To settle down your pitcher. To position your infield. To make sure everything is just so. It’s late and every pitch is potentially a “game changer.”

The recap didn’t share the mound visit that followed that Sborz play. But, I will …

Willie Stargell once said, “They don’t say, ‘Work Ball.’ They say ‘Play Ball.’” And, when you’re in the College World Series, it’s a good idea to savor every moment, even when the game’s on the line.

“Hey, that pitch could have killed you, Josh.” 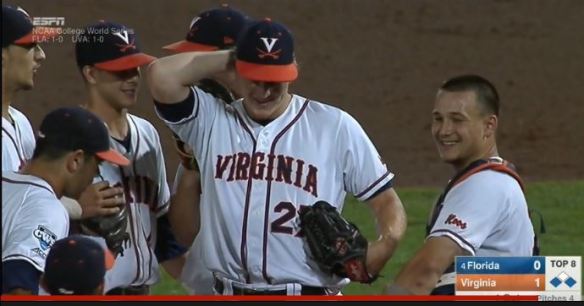 “Hey, do you think we’ll have time for a swim when we get back to the hotel?”

“Hey, have you seen Vanderbilt’s uniforms? It’s like a nine-man prison break.”

“Hey, can you believe we’re playing in the College World Series?”

Which brings us to this classic scene from Bull Durham. I know you know the one. But, watch it again. I know you want to.