So when at times the mob is swayed
To carry praise or blame too far,
We may choose something like a star
To stay our minds on and be staid. ~ Robert Frost

Baseball is a team sport oddly suited for solitude and introverts. To watch, immersed, the pitcher and the batter, standing alone in their places, like those people crowded on the morning subway, absorbed in their alone-ness while standing hip close in a can filled with people.

Like those people who sit alone at the end of the bar staring into ice.

Like those people in church who come early and kneel and hold their rosary more tightly than it needs and you think, “Boy, there must be some stories in those sins.”

The pitcher and the batter, interrupted only by the occasional sign from the catcher or the intrusion of the umpire.

The lonely outfielders, way out in their grass, staring into the game, just like I do off in the bleachers.

Because to immerse yourself in the game as a fan, day after night after day, is an introversion, too. 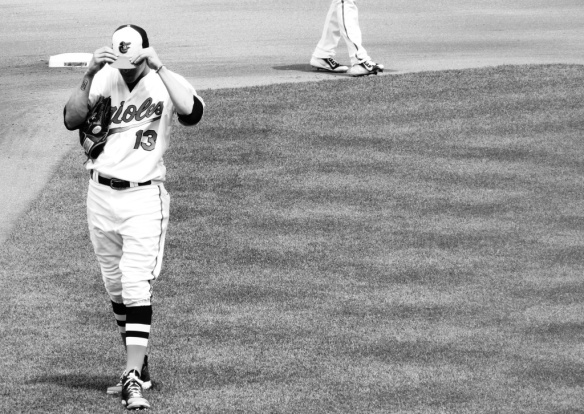 So, when you step out of baseball, when there are no more games, when the players disappear into the fog of that last out to go where sleepy players go when they’re not there on the grass, when you only have the memory of those one or two great plays from the thousands that you have seen, you’re a little like a bear, I think, crawling out of winter torpor or waking up after a night’s storm.

You step out into the sunlight, squint, and look around and see what the world has been doing while you’ve been baseballing.

Because the world seems mean and angry and evil. And, nothing and everything has changed from when you left, when you slipped inside that first game of the spring.

Some of my friends wonder how I can love baseball.

How can I not?

When I saw my first game, I was older, in my 20s. And, our seats were up high in Baltimore’s old Memorial Stadium. And, we wound our way up through those concrete halls and stepped out into the night, where the lights were bright though the sky was not yet dark, and the grass on that wide field was greener than any other grass in the world, and the diamond so carefully cut in straight and even lines, and there were people playing and tossing a ball, and I have only one memory of that first game, looking at all of that before me and thinking, “I’m home.”

How can I not love baseball?

Because this world seems a scary, ugly place. And, is it wrong to want to look away sometimes?

Not to feed the dark impulse to close one’s eyes completely. But, just to seek a second of solitude. So as not to be guided by fear or the misdirection or broad brush of anger.

The game is a rest station. Something like a star.

It has been two weeks without baseball.