!! UPDATE !! Who said everything on the internet leaves a footprint? Well, maybe everything … except the 2015 holiday greetings of your favorite baseball teams. Since I wrote this back in 2015, the original greetings I review here have been overwritten with the 2016 versions. In some cases this is a very good thing … the A’s card is still pretty lousy, but not as horrible as the disappeared 2015 model. In any event, click the links … they’ll take you to the newest versions. Maybe you’ll see something you like, but not what I was seeing back in ’15. I sure wish I could still show you the 2015 Twins holiday card!

It’s a busy time. I know you have lots going on and certainly no time to watch Major League Baseball teams sharing their annual “season’s greetings” with fans.

You don’t have that kind of time to waste.

I binge-watched all 27 team “Season’s Greetings” cards. For you. (Happy Holidays!) I’ve sorted out the best and the worst, and one that, like your drunk uncle at Christmas, is uncomfortably weird. I’ve included links to them all.

Not A Creature Was Stirring, Not Even Mike Trout …

These teams, as of December 20, haven’t bothered to upload a card: Colorado Rockies, Los Angeles Angels, and Philadelphia Phillies. What’s wrong with you people? Too much eggnog at the team Christmas party?

Trust me, once you see the Oakland A’s card, you’ll understand that, really, it’ll only take five seconds to slap some crap together. Even that is better than nothing at all. Or maybe it’s not. I can’t decide.

UPDATE! December 22, 10 a.m. EST: The Rockies and Angels have finally come through with their cards (just click the links above). Not sure they were worth waiting for, but even a mediocre “Happy Holidays” is better than the deafening silence of the Phillies.

UPDATE #2! December 22, 4 p.m. EST:  ‘Bout time, Phillies. And, while you’re not the first team with the synchronized light thing (see Braves, Mariners, Padres, below), you still came through for your fans. So, yay!

Nothing wrong with season highlights from your team. If you’re really lucky, a player might show up to say “Happy Holidays”: Arizona Diamondbacks, Baltimore Orioles, Cleveland Indians, Tampa Rays, Texas Rangers. The best of this genre? The Detroit Tigers who included highlights, player’s greetings, Paws the Tiger, and a reminder that Opening Day is coming soon. 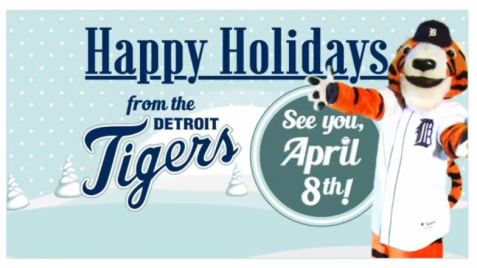 Miami Marlins: And, you know how sometimes someone will say “Happy Holidays,” but they don’t seem very happy about it and you’re pretty sure they don’t mean it?

Kansas City Royals: Type in your name and your Royals card is magically personalized.

Thanks, Royals … and Happy Holidays to YOU!

Royals highlights and players out in the community round out the card. But, just one glimpse of the World Series trophy. It’s almost like they’re embarrassed by all the attention. Hey, Royals, you worked hard for that, you’re allowed to gloat.

The New York Mets understand. Their National League title is nothing to be embarrassed about.

If I did a Top Five list of these cards, the New York Yankees would be #5. But, unfortunately, my “Best Of” list is only four teams long this year. Sorry, Yankees. Still, good job, and, as always, the Yankees find a way to put their old timers to work.

The Lights Are Burning My Brain

Do you have that one guy on your block who starts stringing up lights in September and covers his yard with Santas and penguins and Snoopys and candy canes and that thing from Frozen? And, a few years ago he sync’ed his computer to it and now when he turns on the Trans-Siberian Orchestra everything starts spinning and dancing and jumping around, and it’s so loud and god-awful you decided not to give him the bottle of bourbon you bought for him and instead you sat in your kitchen and drank It yourself while the lights from the “Dancing Elves” on his roof washed over you?

What Else Does A Mascot Have To Do In December?

It’s adorable Orbit from the Houston Astros and his “Night Before Christmas” adventure. I got a little teary-eyed watching poor Orbit all by himself trimming the tree in sad, empty Minute Maid Park on Christmas Eve. Then he brings out the Moon Pies.

You can’t go wrong with Orbit and Moon Pies.

The Milwaukee Brewers trotted out Bernie Brewer and all the Racing Sausages for a Christmas carol. But, no sign of Hank the Dog. 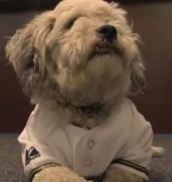 Where is Hank the Dog? What have you done with him?

Oh, God, we almost forgot to do a greeting card … 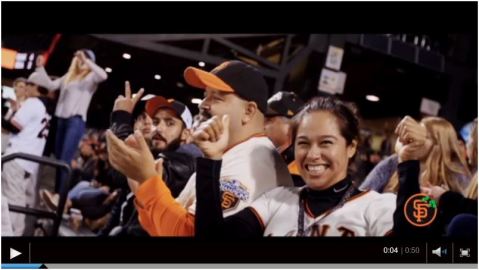 The Boston Red Sox animated a cute pencil drawing of the Green Monster done by a young Red Sox fan.

The Chicago Cubs could have put together an amazing highlight reel, but instead they shared photos of Cubs helping out in the community. If you think I’m going to dog the Cubs for promoting their charitable activities, you are wrong. Good job, Cubbies. But, really, just let Joe Maddon do the card next season.

The Best, The Worst, & The Weird

These teams took the time, made the effort, and genuinely seemed to care about giving something nice to their fans:

Sure it’s a hipster cartoon of the cartoon Cardinals singing an odd, jazzy, doo-woppy Christmas-ish song that I think they just made up, but it’s still pretty good. Plus, nice use of the word “Yuletide” in the lyrics.

Stuff a baseball game into an L train and here’s what you’ll get – a train filled with fans, hot dog vendors, the Racing Mascots, The Wave, an umpire, an organist, Cracker Jack, a dusty World Series trophy, and Southpaw, that green fuzzy thing. Even White Sox second baseman Micah Johnson turns up! (Oops, Micah was traded to the Dodgers last week. I guess he was just taking the L to O’Hare.) This is the holiday party you wish your office would throw.

Racing Presidents, National Anthem singers, the famed Gay Men’s Chorus of Washington, violinists from the Heifetz Institute, and a “Hello” from new manager Dusty Baker. Remember when Jonathan Papelbon choked Bryce Harper in the dugout in September? Neither do the Nats. Elegant and classy. 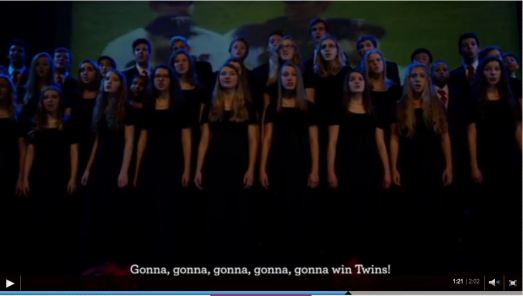 The Angelica Cantanti Youth Choirs join the Twins in a brand new Twinsian version of the Carol of the Bells. Sure, it’s a little cheesy, but it’s good, too. So good that I’m no longer mad at the Twins for sweeping the Orioles last season.

#26. The Oakland A’s. Thanks for not trying, dudes. That’s why you sucked last season.

I’m serious. This is a highlight.

What could be more festive than Jose Bautista’s snotty bat flip in the ALDS set to a holiday song? Apparently, in Canada, nothing. What do you want for Christmas, Blue Jays? We want to be the jerks everyone hates.

Look, it’s even on a sweater!

The Dodgers: Well, there’s Vin Scully, so it should be great. But, it’s not. It’s claymation-like, four minutes long, and sort of creepy. 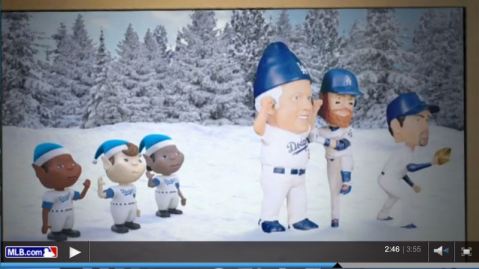 Justin (JT) Turner and Adrian Gonzalez are bobble heads with the DTs who are summoned to the North Pole by garden gnome Tommy Lasorda who is being held hostage by elves in Dodgers uniforms, and … I’m not sure why. And, why are Lasorda’s arms up in the air like that? The elves think JT is Santa from the strange, not-good 1970 “Santa Claus Is Coming To Town” cartoon because, uh, because he has a beard, that’s why!  So he has to show them a photo of his girlfriend to prove that he’s not. Then all the Dodger bobble heads with DTs sing “Jingle Bells.” Even David Lynch is confused.

Now we know why Greinke left.