“With the tail-end of that dreadful Northwestern blizzard rattling the windows and doors and the ground partly covered with snow and ice, it is rather difficult to compose an original article on baseball.” ~ The Washington Post, January 22, 1888

Before we get to my garden gnomes …

He pitched nine games or so for the Plainview Ponies and the Abilene Blue Sox. These were Class C teams in the West Texas-New Mexico League. He was from Sulphur Springs, Texas. He was 19. He was a lefty.

Other than that, there’s not much to tell; just a few mentions in The Abilene Reporter News in the spring of 1954.

He first appears on April 28, playing with Plainview. He came into a game as a reliever and pitched part of the 8th. No runs.

On May 8, now with Abilene, he was one of four Blue Sox relievers who struggled through the 4th inning versus the Pampa Oilers; together the four relievers gave up seven runs in that inning. The Sox lost 12-4.

On May 20, another loss, this one to the Clovis Pioneers 9-3, and Blizzard came in to eat up the last 4.1 innings, holding the Oilers to just 3 hits, no runs.

May 25. Double-header, two losses, and two relief appearances from Blizzard who gave up one run in his second game of the day.

June 1. Another Blue Sox loss. Blizzard comes in in the 9th and walks two. On June 21, the Blue Sox send him to Oklahoma City.

And, he disappears. Leastways, I can’t find him.

He could very well be Jack Blizzard of Nederland, Texas, a former salesman, who passed away in 2009. His obituary doesn’t mention the spring of 1954 or baseball, but all the other details fit.

Today would be a good day to talk about Jack Blizzard, when there’s nearly two feet of snow outside here in Virginia.

Or, we could talk about Charlie Snow who played in just one big league game – on October 1, 1874 with the Brooklyn Atlantics.

But, I can’t tell you much about him either. I can’t find a record or box score of that game, but some records indicate he caught the game and went 1-for-1.

In Game 2 of the 2000 NLDS, Giants versus Mets, Snow’s 3-run homer in the bottom of the 9th tied the game, but the Giants lost in the 10th anyway and ultimately lost the series. (The Mets went on to win the NL pennant and lose the World Series.)

Just like in 1888, it’s rather difficult to compose an original article on baseball today.

So, all I have left are my garden gnomes in the Virginia snow. “Gnomeageddon.” 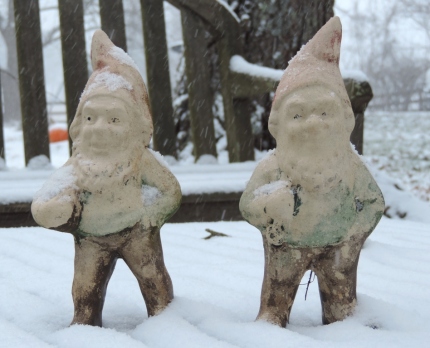 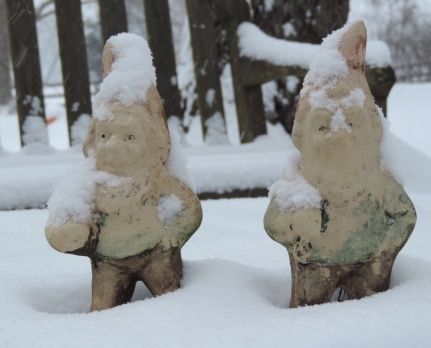 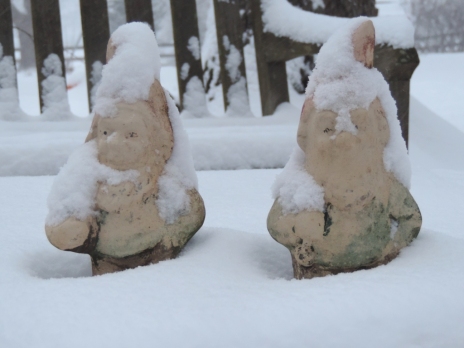 Friday, 5:00 p.m. The snow has reached gnome-butt level. Clearly, this is serious snow.

Friday, 9:00 p.m. The snow is now gnome-beard high. Stay strong, little gnomes! (Editor/Husband — after a brief “Are you serious?” conversation — trudged out into the cold and dark and held the light for me. He’s a trooper!)

Saturday, 7 a.m. You know the old saying, “Snow is as high as a little gnome’s eye.” 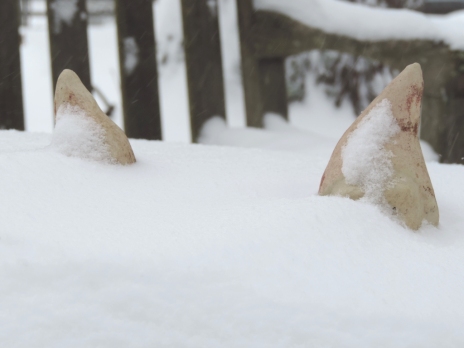 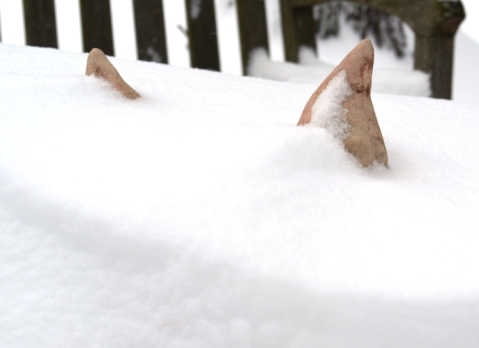 Saturday, 3:30 p.m. Covered up. But, don’t worry, when stressed gnomes breathe through their hats. (Although I’m pretty sure that one on the left just split and left his hat behind.)

It’s been 12 weeks since baseball. And, it’s still snowing.

SUNDAY UPDATE: The Snow Has Stopped!

Some of my friends were concerned that I was treating these gnomes inhumanely (not understanding, I guess, that these particular gnomes are made of terracotta clay and are not real live gnomes). (I admit that it’s hard to tell when most of them are under snow.)

I hope this photo from Sunday morning will put everyone’s mind at ease.

18 thoughts on “Blizzard, Snow, and My Garden Gnomes”