On May 25, 2011, in San Francisco, Florida Marlins outfielder Scott Cousins collided with Giants catcher Buster Posey in a play at the plate. Posey’s leg was broken. He was out for the rest of the season.

(You can watch it here, though I wouldn’t recommend it.)

On January 1, 2017, in Orange, Virginia, in what I think was some sort of weird performance art recreation, Editor/Husband played the role of Buster Posey. Scott Cousins was played by my Yoga Studio floor.

Editor/Husband fell and “bustered” his leg on New Year’s Day.

That is, he fractured the neck of his femur which is the fancy pants way to say, he broke his hip. (But having a broken hip sounds like something a frail grandma would do, so we’re going with broken leg which sounds more “Posey-an.”)

Well, not quite. But, close enough.

The fracture has been knitted back together with a rod and a pin (and a handful of wound-closing staples that makes the side of his leg look a little like a football). 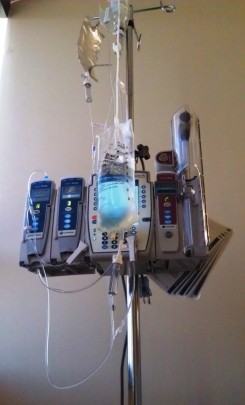 Editor/Husband will be on the DL for awhile.

And, so to New Year’s Resolutions.

That is, I hate most New Year’s Resolutions. Because they are stupid and impossible.

There is only one perfect list. Six perfect resolutions.

You probably know them. If you’re as smart as I think you are, you know them by heart.

Satchel Paige pitched professionally for 40 years — from 1926 to 1966. He was so well-conditioned, it’s said, he could warm up his arm with just five or six pitches.

Satchel Paige had six rules for “How To Stay Young.”

They were first published in 1953 when he was 47. (He played professionally until he was 60.) I’ve put them on here before. But, they’re worth repeating.

It’s so Yoga, these rules, that I often say Satchel Paige is my guru. And, I mean that.

It’s so Yoga that THIS is the actual cover of the 1953 Collier’s magazine that these rules first appeared in:

For now our lives have settled into a strange new normal.  For me it means unhurried showers in the middle of the morning. A second pot of coffee. Thinking about what to make for dinner. Lingering and staying close.

Editor/Husband has the much tougher road. He’s home now, but moving is hard. I gave him a little bell and he rings it when he needs to get up or wants a snack. But, the leg is sore and stiff and heavy. Healing will take awhile.

Hospitals and broken legs and bedridden-ness are uncharted territories for us.

Buster Posey’s leg healed. He was back playing the next season, 2012. That season he was an All Star, won a Silver Slugger, and was the National League’s MVP. His Giants won the World Series.

Editor/Husband will be fine. I’m sure of it.

Sunday, January 8 ~ Here’s an update: The Only Broken Hip In Baseball