If you ever need to get from the bottom of the East Coast to the top – or top to bottom – you’ll probably end up on Interstate 95.

That 1,900-mile road – the most traveled in America (which surprises no one who has ever been on it) – can take you from Houlton, Maine to Miami, Florida and back again.

You’ve probably been on it. And, you’ve probably cursed at it, muttered at it, and yelled at its gridlock that stretched out in front of you. Everybody does that. That’s proper I-95 etiquette.

(Because The Baseball Bloggess does not wish to mislead you: A 12-mile gap around Trenton, New Jersey prevents I-95 from being a complete North-South highway. That gap should be fixed in 2018.)

In the middle-ish of I-95, you’ll pass through Caroline County, Virginia

If you need to stop, exits 104 at Bowling Green and 110 at Ladysmith will pop you out into the county.

(It’s pronounced Care-oh-Line and was named in 1728 in honor of Queen Caroline, wife of England’s King George II.)

I-95’s proximity is not the most interesting thing about Caroline County.

And, baseball is not the most interesting thing about it, either.

We’ll get to baseball before we’re done here, but first we need to cover a few important non-baseball things that happened in Caroline County. 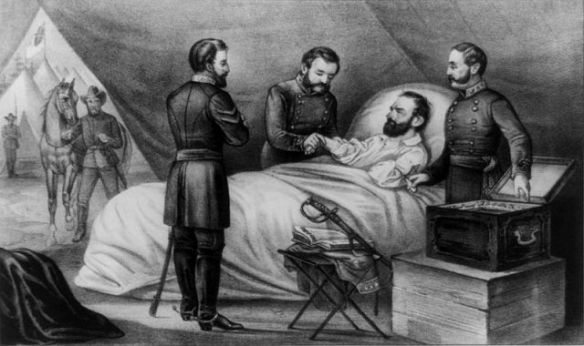 Currier & Ives lithograph, via the Library of Congress, Public Domain

The Death of Stonewall Jackson

Confederate General Stonewall Jackson, accidently shot by his own soldiers in May 1863, died eight days later in Woodford, Virginia – in the central part of the county.

The Library of Congress, Public Domain

The Death of John Wilkes Booth

And, in 1865 in the northeast corner of the county, John Wilkes Booth, the man who assassinated Lincoln, was tracked to a local farm, shot, and killed by federal troops following a 10-day manhunt. 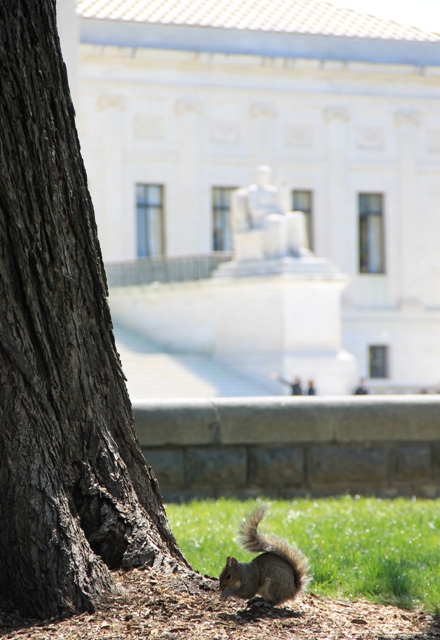 courtesy of the Architect of the Capitol, Public Domain

Squirrel in front of the U.S. Supreme Court. (The squirrel has nothing to do with this story. I just thought he was cute.)

In 1967, the U.S. Supreme Court, in the case Loving v. Virginia, ruled that laws banning interracial marriage were a violation of the Constitution.

The Lovings – Richard, who was white, and Mildred, who was black – were from Caroline County, specifically Central Point, which is just a few miles east of the town of Sparta, a place we will visit again when this story gets to baseball. (Which, I promise you, it will.) 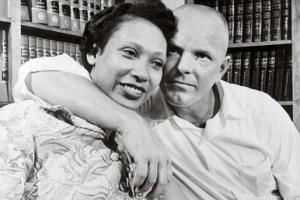 Married in 1958, the Lovings were arrested by county officers in 1959 for violating Virginia’s interracial marriage bans. (Virginia laws banned interracial marriages in the state and banned interracial couples who were married in other states from living in Virginia.) The Lovings were tried and found guilty. The judge agreed to suspend their prison sentences if they would leave Virginia, which they did. The couple moved to Washington, DC and returned to the county following the Supreme Court ruling.

Their story is told in the 2016 film Loving, several scenes of which were filmed in Caroline County, including in the county seat, Bowling Green, which probably delighted the film’s director Jeff Nichols because I’m pretty sure today’s Bowling Green looks a whole lot like 1958’s Bowling Green.

This is all, I admit, much more important than baseball.

Oh, and one more thing before we get to baseball. Because the ballplayers I’m going to tell you about aren’t even the greatest sports legends to be born in Caroline County.

That title belongs to Secretariat, the greatest racehorse of all time, who was born in 1970 at The Meadow Farm in the southern part of the county.

“This most magnificent animal … has today run the most sensational Belmont Stake in the history of this race.”

There is baseball, too, in Caroline County, but not on display at Bowling Green’s Historical Center (which is in the old courthouse building – as seen in the movie Loving).

The helpful volunteer who greeted us at the Center told us two things – first, that she was from Florida and not from “here” and second, that a long display case had previously been “full of baseball” but was now full of a World War II exhibit. She seemed almost apologetic that we had come all this way for baseball and all she could offer was a display case of World War II ration cards.

It wasn’t what we were looking for, but it was still interesting.

It was a very small room and I didn’t see anything on the Civil War or the Lovings or Secretariat in there either.

The volunteer took my card and said she would have someone call me back to talk about Caroline County baseball. But, no one ever called.

Which is a shame, because there are three baseball stories to tell – Clarence “Soup” Campbell, Lew Beasley, and Lew’s nephew Tony Beasley. 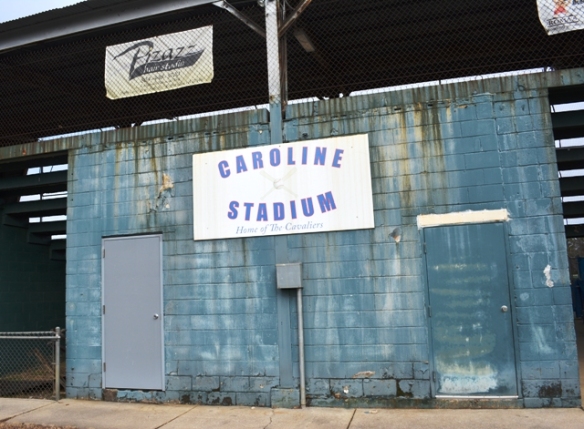 (Sure, one of these men never played a single major league game, making him ineligible per my exacting Virginia-Born Project criteria. But, he has spent more time in major league games than the other two combined. So, there. Leave him off your list if you must. He stays on mine.)

15 thoughts on “Caroline County, Virginia — A Baseball Story In 3 Acts”