I am so tired of World Series reruns. Is that all ESPN and MLB keep in their archives? A handful of mostly Yankees games? I just want to see a game … a regular, any ol’ game. A game that will surprise me, not because it stands the test of time, but simply because it’s baseball.

The American and National Leagues would play the first-ever official World Series in October 1903.

But, on May 4, you couldn’t have guessed that the Boston Americans would win that Series.

First off, the squabbling National and American Leagues wouldn’t even agree to hold an interleague championship until August.

And, second, on May 4, the Boston Americans weren’t great. They weren’t even particularly good.

Coming off of a so-so 1902 season, the Americans (who wouldn’t be called the Red Sox until 1907) were 6-7 on May 4, mired in the middle of the pack and 2.5 games back of the White Sox. The Washington Senators were 2.5 games back, too. (The Senators would finish the season tied with the Cardinals for the worst record in baseball.)

It wasn’t a particularly news’y Monday, that May 4, but this Gold Medal Flour ad on page one of The Boston Globe caught my eye. 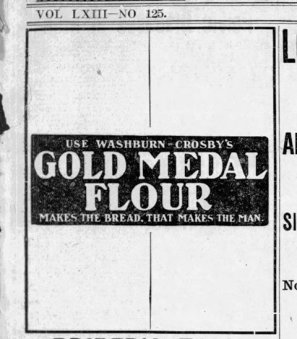 Fun Fact: Flour — Or The Lack Of It — Is Still Front-Page News 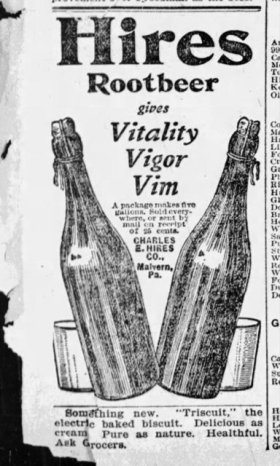 And, There Was Root Beer, Too! And, In Teeny-Tiny Type, Something New: Triscuits! 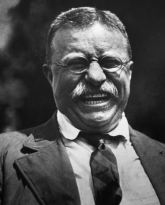 Meanwhile, on a trip through Kansas over the weekend, a local gifted President Theodore Roosevelt with a two-week old badger.

“The little animal is as friendly as can be.”

(Ooops, sorry. Back to baseball.)

God, it was cold in Boston on May 4. Windy. Rainy, too. Game time temperature was around 49. It drizzled all afternoon.

A good day for the New England farmers, who desperately needed the rain. A lousy day for baseball.

“[I]t was only the dyed-in-the-wool through and through rooter that had the nerve to hie up to the game.” — Boston Post. 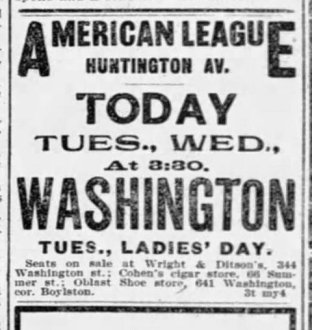 Sorry, Not Today, Ladies. Your Day Is Tuesday.

The weather was so lousy that the National League Boston Beaneaters, who were scheduled to play the New York Giants at nearby South End Grounds, cancelled their game before it even started. Most of the Beaneaters and Giants headed over to watch the Americans’ game. 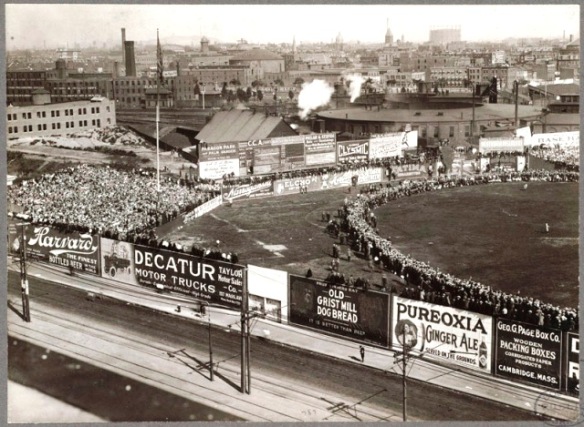 Boston’s Huntington Avenue Grounds On A Nicer Day. South Ends Grounds Can Be Seen In The Upper Right Corner.

Cy Young’s 28 wins for the Boston Americans would lead the league in 1903.

Tom Hughes, third in the Boston rotation behind Young and Bill Dinneen, would win 20. 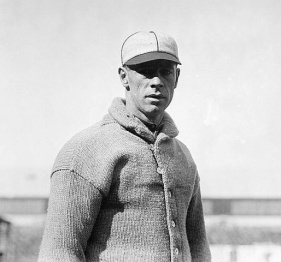 Public Domain via the Library of Congress Prints & Photographs Division

Just 718 turned out for the game on that raw, windy Monday – the smallest crowd ever at Boston’s Huntington Avenue Grounds, which averaged about 6,000.

“The 700 spectators were scattered about the park with heavy coat collars turned up, and old pneumonia chuckled and rubbed his hands with glee.” — The Boston Globe.

But Boston’s 5’8” second baseman Hobe Ferris was the player of the game. 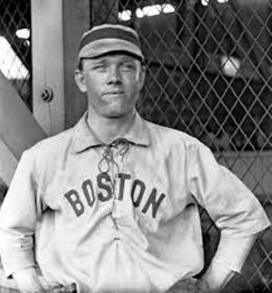 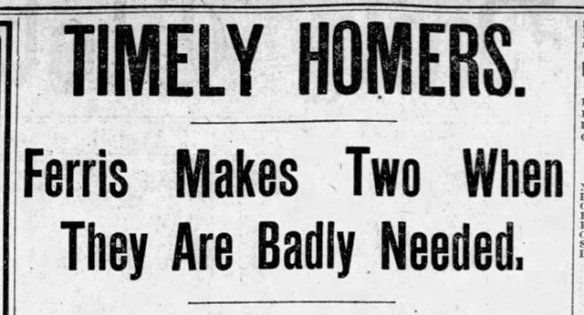 Ferris’s solo home run to right-center in the sixth broke a 4-4 tie. That homer and a triple in the third that led to three runs, accounted for four of the Americans’ six runs.

It wasn’t, although he scored on the play. Let’s unpack things.

Ferris’s triple came with two-out, two-on in the third. The baseball shot its way to left field, easily scoring the two men on. Ferris scored, too, on an error, when the Senator’s left fielder Big Ed Delahanty lazily lobbed the ball to Senator’s shortstop Rabbit Robinson, who lazily didn’t bother to try to throw the runner out at home. (Depending on the newspaper you’re reading, Delahanty was charged with the error, Robinson was, or neither was.)

(On October 1, in Game 1, Ferris, himself, would commit the first error in World Series history.) 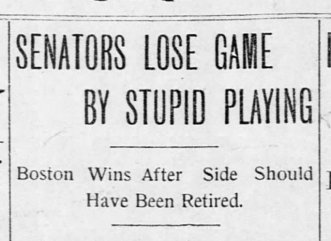 “Brainless playing! Who would not rather see a comedy of errors than a game lost by stupid ball playing?”

The Senators’ three errors (or five depending on the paper) led to five unearned runs. The only earned run for Boston was Ferris’s sixth-inning homer.

The game, all the papers agree, took exactly two hours. 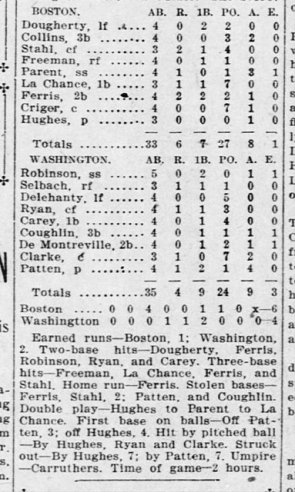 Washington skipper Tom Loftus called a team meeting after the game, The Washington Times reported, “and handed it out to them straight from the shoulder.”

That must have set a fire under them. The next day, another raw and wet Boston day, the Senators scored three quick runs off Boston’s Bill Dinneen in the first.

Shortly after that third Washington run, time was called on account of rain. Thirty minutes later the game was cancelled. 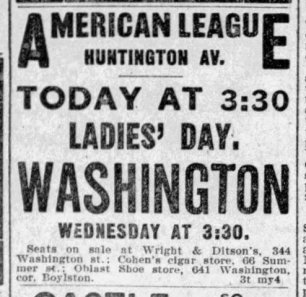