Many years ago, long before I came along, my dad ran a string of gas stations in Los Angeles. He was very good at his job. He ran a tight ship.

That laser-like attention to detail and exacting perfection didn’t change over the years. He demanded a lot of himself, and, by turn, everyone else.

A “Do you know who I am?” led to a “I don’t care who you are.” Rooney, the story goes, expected free service on his car, simply because he was famous.

A scrap of some kind ensued. (I’m biased, but I’m gonna go with my dad on this one. Because really … a Hollywood star kicks up a stink with a gas station guy? I’m just going to assume the Average Joe was the good guy.)

From then on, Mickey Rooney was not spoken of in our home.

So, it was with a bit of sadness – no, sadness isn’t right; let’s call it You MUST be kidding eye-rolling – when I read a tribute to the legendary Baltimore Orioles manager Earl Weaver, who passed away on January 19 at age 82, that described him as “Mickey Rooney in a uniform.”

You’re comparing a baseball legend to this guy who picked a fight with my dad because he was expected to pay for service like everyone else?

The Earl of Baltimore was a baseball genius.

But, he was also a scrappy, crabby, cranky, irascible, chain-smoking, argumentative firecracker, who might be best known for all the times he tangled with umpires, kicking dirt and getting ejected from 98 games.

He was a tough-as-nails perfectionist who demanded a lot of himself, and, by turn, everyone else. Kinda like my dad.

Earl Weaver is, on the one hand, a big ball of everything I usually find unpleasant about the game.

Crabby, loud, vulgar. Extremely vulgar. Did I mention the chain-smoking? (He was ejected at least once for smoking in the dugout.)

But, he is also a lot of what I find wonderful about baseball.

He treated a baseball game like a chess match. He was loyal to his players. He demanded the best from them and routinely got it.

He had no time for Prima Donnas.

(Unless you were legendary pitcher Jim Palmer, who, while no Prima Donna, was rather demanding himself. But, as far as Weaver was concerned, if you could win 20 games a year – like Palmer did year after year – then you were worth the dust-ups and prickly fusses.)

Before computers and spreadsheets, Weaver would have his own deeply detailed statistics handwritten on white note cards which he kept beside him in the dugout. He knew how to position his defense for any potential batter; he knew how every Oriole batted against any potential pitcher. And, it was all by pen and paper.

He hated to waste outs. That’s why he hated the bunt. Wasteful and inefficient. He loved homeruns which led to runs, leaving nothing to chance.

He grew tomatoes in the bullpen. Why not get a little something extra out of those far reaches of the ballpark?

Yes, Weaver got angry a lot, blew up, yelled, and kicked dirt like a petulant child. The stories from players, umpires, and fans, are endless. Almost unbelievable. You can watch one legendary ejection here.

He yelled at umpires and at his players.

Not Yoga-like. Not charming.

But, then he moved on. Every day was a new start. Close the book and start again.

Focusing only on what you can control today. Being the very best at this present moment. Not worrying about the next game or the next day.

This all kind of reminds me of my dad.

He got angry a lot, too, especially when things weren’t exactly to his liking. When they weren’t “just so.” Especially when those around him didn’t adhere to the same high standards he set for himself. I got in the way of that exacting standard many, many, many times.

But, then he would get over it. As though nothing had ever happened. And, a new day would begin.

In his 17 big-league seasons, Earl Weaver was never fired and stayed with the Orioles throughout his career. He retired with a 1,480-1,060 record – a win percentage of .583, one of the best records in baseball. Weaver once said, “On my tombstone just write ‘The sorest loser who ever lived.’”

I don’t know much about Mickey Rooney. But, I’d like to think that Earl Weaver wouldn’t have caused a scene at my dad’s gas station. I think Earl Weaver would have appreciated my dad’s attention to detail, relentless commitment to perfection, and to keeping things “just so.”

Maybe they’re having a smoke and a beer together in heaven. Earl can explain to my dad why baseball is the greatest game. They can argue about that for awhile.

Rest in peace, Mr. Weaver, Earl of Baltimore. Thanks for giving us Orioles baseball. 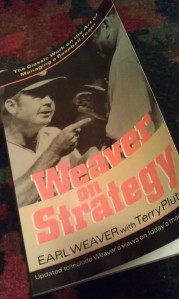 My dog-earred copy of Weaver on Strategy (1984, updated in 2002, and still in print) is always close at hand during the season.

4 thoughts on “Remembering Earl Weaver … & Thinking About My Dad”