I’d like to visit Wrigley some day, but not in March.

Because it’s cold.  And, it snows.  And, there are no Cubs there in March.

(Did you know that the Cubs are one of the only major league teams that doesn’t have an oversized, furry mascot roaming around during games? The Cubs are ready-made for a mascot – they’re Cubs, for heaven’s sake.  The team believes a mascot would cheapen the majesty of Wrigley. They are wrong. Mascots are amazing.)

There are very few cases of a team actually buying their own Spring Training facility. (Multi-multi-multi-millions of dollars, the majority from taxpayers, fund most of the Spring Training parks you can visit today.  Thank you, Americans!)

In the early years, most teams were virtual nomads, wandering from whatever college or minor league park in the south might accommodate them for a few weeks each spring.  They bunked en masse in fraternity houses or cheap hotels, and dined at boarding houses overseen, I gather, by plump, elderly widows dishing out the morning grits.

Now, imagine if your owner bought an island – an entire island! – and then plopped you and your teammates right down in the middle of it.

Who cares if the nearest other team is THOUSANDS of miles away?  This is Paradise, Baby!

And, so, when Chicago Cubs owner William Wrigley shelled out about $3 million for Santa Catalina Island, 25 miles off the coast of California, in 1919, he packed up his Cubbies and shipped them off to Xanadu. 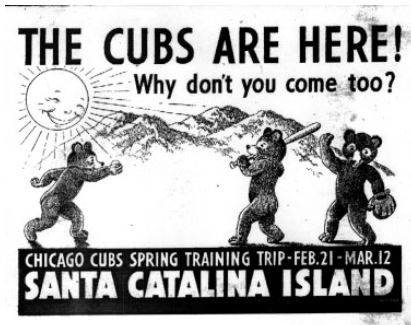 Dodgertown? It’s a TOWN.  The Cubs had an island!

Dodgertown in Florida was fashioned out of an abandoned old concrete military base in the 1940s.  (The Dodgers abandoned it themselves in 2008.)

By contrast, Catalina is an island. Twenty-one miles long, eight miles wide.  70 degrees and sunny when I last checked.

Wrigley set about making Catalina a must-see tourist destination. He improved the island’s infrastructure, and built a dazzling array of hotels, dance halls, and recreation facilities. And, he gave them the Cubs.

As Cubs pitcher Bob Kelley, who enjoyed his first Catalina Spring Training in 1948, put it, “It’s a long way down to earth from there.”

Catalina was the Cubs’ Spring Training home from 1921 until 1951 (minus a couple years during World War II, when Indiana had to suffice). 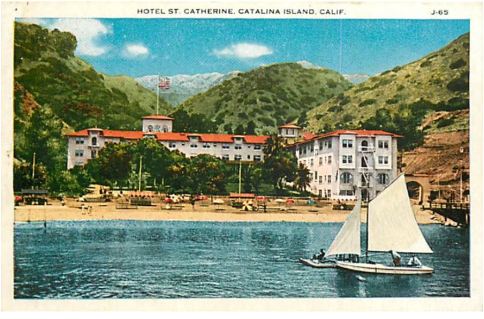 The Cubs lived at the luxurious Hotel St. Catherine, nestled on the bay.  They practiced in the warm sunshine at a ballpark that perfectly matched the dimensions of Wrigley Field. They had a lovely clubhouse which still stands today and houses the local Country Club.

The Cubs Clubhouse is now the Catalina Country Club.

During off hours, Cubbies could swim, sun, golf, hunt, or “chase skirts” at the glamorous Avalon Grand Casino, which wasn’t really a casino, but the world’s largest dance hall, filled, I’m sure, with the world’s most beautiful girls.

Frankly, I’m surprised anyone ever left.

With no other major league teams nearby – especially in the early years – the Cubs played a good share of intrasquad games, took on local teams, and even once played a boat-load of movie stars that were ferried out on a publicity stunt.

But, paradise never lasts, does it? A run of bad weather over a few seasons – rain, even some snow – was Catalina’s undoing. The Cubs decamped for Mesa, Arizona in 1952, where they’ve been ever since.

In the 1970s, the Wrigley family donated most of the island to a conservation trust.

When I asked a client, and Californian, about Catalina, she said, “You know I lived in Palos Verdes for 30 years. I could see Catalina from my window. I never went there.”

Maybe Catalina is the local “attraction” that exists everywhere. It’s like the museum, monument, or historical spot, in your own town, that you never bother to visit.  (Then, inevitably, you move away and wonder, “Why did I never go there?”)

All my client knew about Catalina was that it was once stocked with wild boars to encourage hunters to visit.  Someone else I asked knew about the feral goats that overran the island until the late 1990s when some were rescued and removed, and many others, well … weren’t quite so lucky.

Then there’s Catalina salad dressing, which, everyone believes, was named for the island though no one seems to know why. (Kraft won’t say, and believe me, I tried.)

Even though the Cubs haven’t won a World Series since 1908, you can’t discount a team that spent 30 years warming up on a beautiful island. So, I deem Catalina Island in California #4 on my list of amazing Spring Training locations.  #3 Coming Soon.

In 2014, the Cubs will move into a spacious, new Spring Training facility, funded, in large part, by $84 million provided by the city of Mesa, Arizona, according to The Phoenix Business Journal. They will enjoy a luxury ballpark, ample practice fields, and a state-of-the-art “training complex” that will be the largest of all the Spring Training venues.  The area, which will include its own park, lake, and shopping/dining district, will be called Wrigleyville West.

#5 ~ The Yankees in Shreveport, Louisiana

Learn more about the Cubs in Catalina:

Here’s a sweet two-minute film on the Cubs & Catalina:

This post is dedicated to Cubs fan Jan Yuvan of Yuvan Yoga, Chicago. Even though she didn’t know me, she graciously allowed me to use her OM baseball photo on this blog. If any Cubs fans are reading this, please contact the Cubs and urge them to hire her as their Yoga Coach. The World Series will be in the bag!