The game is full of subtlety,

Of science and of art,

Where mind and brain

Must carry out their part.

But when it comes to climax stuff

Beyond the final scoff,

Give me the bloke

Who tears the cover off.

In today’s installment of “Spring Training Is Way Better Than Sitting In A House Without Power During A Freak Snowstorm In March” … let’s head to Shreveport, Louisiana.

Spring Training with the New York Yankees. (And, you know this better be good if I’m going to spend a post talking about the Yankees.)

See, Spring Training wasn’t always Grapefruits and Cactus.  Georgia, South Carolina, Texas, and Alabama were all popular destinations in the early years of baseball.  Teams just seemed to wander around.

Spring Training over the years has evolved into a structured program to polish up one’s skills with weight training, fielding drills, batting practice, and conditioning programs.  (Even, most happily, Yoga. Big shout out to the Oakland A’s and Baltimore Orioles who have mentioned their Yoga programs in recent weeks.)

Back in early 20th century however, Spring Training was really just a time to get everyone back together, detox from the excesses of the off-season (mineral hot springs were especially popular), burn off winter weight, toss around a medicine ball, and try to get back into some sort of playing shape.

Shreveport – in the midst of its own crazy oil boom (and not very “dry” at all) – would be a place where Babe Ruth and the rest of the team could focus on baseball.

Oh, did I not mention Babe?

George Herman Ruth.  Baltimore native.  The man who bestowed one of the most successful and enduring curses on the Boston Red Sox.  He did some other stuff too, hit some homers, changed the face of baseball, you know, that sort of thing, but I think I hit the high points. 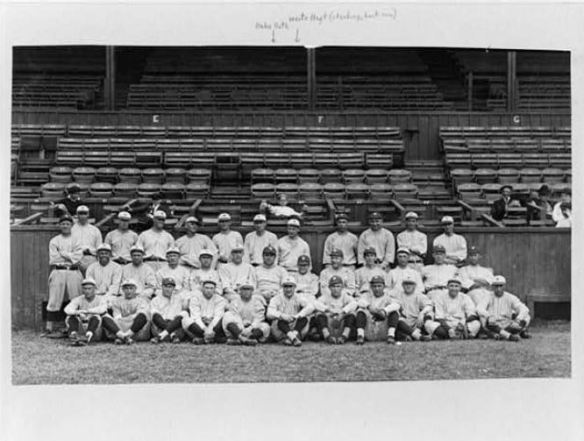 New York Yankees, Spring Training 1921. Babe Ruth is there in the center.

In his first practice at Shreveport’s Gasser Park in early March, it’s said that the Babe took his spot in batting practice and promptly crushed nine balls clear out of the park.

Legend has it that he hit one ball 30 feet past the outfield fences – the longest home run ever in Gasser Park.

A reporter at the time referred to Ruth’s “daily training stunt of belting balls over the fences of Gasser Park.”

Another reporter described them as “lusty wallops.” (Lusty Wallops is not only a great way to describe a home run, it is also a great name for a stripper.) 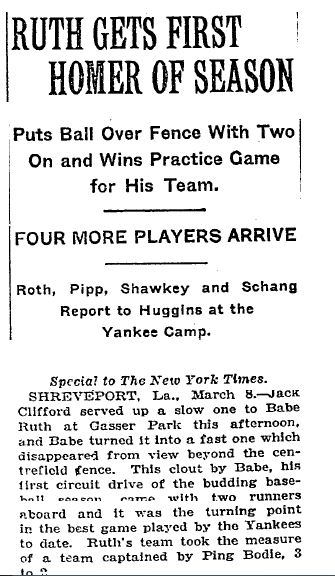 You see, home runs were a pretty rare deal back then. These days, we see ‘em all the time. But, it was Babe who made them famous.

Because there weren’t any other major league teams nearby to take on in Shreveport, the Yankees spent most of their Spring Training simply playing the minor league Shreveport Gassers. Over and over.

(All this Gasser stuff – Gasser Park, the team was the Gassers – was a tip of the cap to the local oil boom.)

I can find one report of the Gassers actually winning a game against the Yankees that spring.  Generally, they lost.  But, who cares, the locals just wanted to see the Babe.

And, how did Babe do? 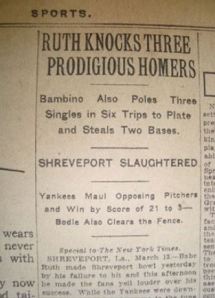 It’s said that one of Babe’s home runs that day broke the window of a streetcar as it passed by.

Although the Yankees lost the World Series that year to the New York Giants, the Babe hit 59 home runs, batting .378 (.846 slugging percentage). By mid-season he had his 139th career homer, a baseball record.

So, yeh, he was pretty good.

Ultimately, though, poor Shreveport proved to be a bit too far off the beaten track. Perhaps, a little too isolated, and not “dry” enough.

And, so the team moved to New Orleans the following season. Because, really, what kind of trouble could a carousing, overindulging, team of playboy Yankees get into in a sweet innocent town like New Orleans?  (The management ultimately hired a private eye to spy on the players and keep them out of trouble.)

The weather’s not all that great in Shreveport in March anyway.  Highs in the 50s, lows often dip well below freezing.  It’s not the best place to “warm up” one’s baseball bones.

Still, if Babe Ruth is playing, I deem 1921 Shreveport as #5 on my top all-time Spring Training locations.  And, far better than sitting in a cold, unpowered house during a freak Virginia snowstorm.  #4 on the list … coming soon!

There’s no professional baseball in Shreveport today.  Which is a shame.

The last pro team, the Shreveport-Bossier Captains of the Independent League, left in 2011.  You’ll find them in Laredo, Texas now, where they’re called the Lemurs.

This is Pancho el Lemur, the mascot of the Laredo Lemurs. 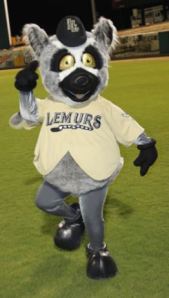 Lemurs, by the way, are not native to Laredo.

But, Freddie Benavides, who spent four years in the majors in the early 1990s, is.

Lots of great resources for learning more about Babe Ruth, the Yankees, and 1921 Spring Training:

The Boy Who Broke Lou Gehrig’s Record, by Jerry Bird

And, the book that helped me truly appreciate Spring Training and its history:

Under The March Sun, by Charles Fountain