The bases in baseball might have been imagined in the 19th century, but their beginnings were probably much earlier than that. Historians often reach back to the 18th or even 17th centuries to find something undeniably baseball-ish about the games children played.

(Historian David Block can take it all the way back to 1450.)

(There are a lot of very good baseball historians in the world today. You could probably fill Wrigley Field’s bleachers with them and have to pour the overflow historians into Fenway. Football historians, on the other hand, can easily be transported in a minivan.)

Bases are the grail for many historians. If a game had you run to a specified point or “base,” you were probably playing some form of baseball.

But I think if they were inventing baseball today, there would be no “Home.”

Oh, the base would be there … the plate, the dish, it has a few different names. The umpire might still ceremoniously dust it off with a whisk broom from time to time, and it would still be 60 feet 6 inches from the pitcher. But, I don’t think we would call it “home.”

We might call it a Blast Pad, a Stamping Stone, or the Swat Zone. Those all sound cool, right?

Or, more likely, we’d just make up a word. The Skizzle! The Bagzooka! The Scoreatorium!

But, surely not “home” … which conjures up images of the kindness of mom and cookies and soup and underwear hanging on the line.

And, unlike baseball, the place in life where you start and then you end isn’t always the same “home.”

I’m not even sure I know what a hometown is. Is that where I was born? Where I grew up? Or, where I’m living now? Because I can call each of them “home.”  And, they are all quite different places. (The ocean is on the other side now.)

I don’t really remember much about where I was born.  We moved when I was still mini-sized. (I was born in the same hospital as Robin Ventura, by the way. So I’ll always have a little hometown kinship with him. And, I never liked Nolan Ryan.)

Then we moved to another part of California. And, when I was old enough, my dad taught me about “home teams.” And, since we lived near the Bay Area, I became a Giants-A’s-49ers-Raiders fan.

(It really stinks being on a football boycott when the 49ers are doing so well. Or, leastways, that’s what I’ve been told.)

My dad schooled me in football. My little-girl baseball knowledge pretty much boiled down to ranking the players on my baseball cards on a highly precise and carefully researched Cutie Pie Scale. (Oakland A’s? Very cutie pie.)

I showed flashes of home team spirit, as seen here when I firmly and sadly crossed “GIANTS” off of my Willie Mays’ card when he went to the Mets. 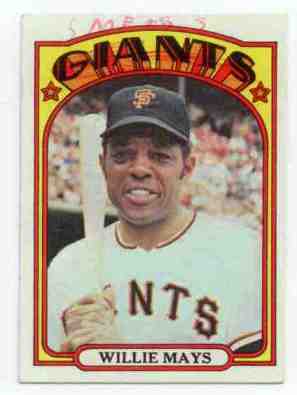 Even then, I was conflicted by what home means. If Willie Mays was no longer a Giant, what was the point? What good is having a home, if no one is going to stay there?

I tell this story a lot, and it is true. When I stepped out of the cement walkway and into the upper deck of Baltimore’s Memorial Stadium for the very first time, I saw the green grass and the diamond spread out before me.

So, maybe the Orioles aren’t technically my “home” team, since they’re 126 miles – and lots of traffic – away. Does it matter anymore where you actually live? Or, do we define home differently now?

Baseball players, themselves, are nomads. They are shuttled around from team to team, town to town. There are few Cal Ripkens left out there who get to play every day for their own hometown team.

Home plate may be the only “home” a player can count on during his career.

(And, woe to the American League pitcher who only gets a look at “home” and never gets to actually go there.)

Fans have cable and the internet and can watch any game from practically anywhere in the world. Live.

I can listen to Vin Scully call a Dodgers game thousands of miles away. Jon Miller, who I missed for so many years, now comes through loud and clear calling Giants games on my Sirius Radio.

Anywhere can be home. And, if anywhere is home, maybe home isn’t the same thing that it once was.

In baseball, home is where you start and where you hope you end up. You’ll run around for awhile, but, if all goes well you’ll end up again at home, right where you started.

In baseball, that’ll earn you a run.

In life, I’m not sure what that gets you anymore. Sometimes, if you end up back at home – to sleep, perhaps, in your parents’ basement – it’s because things haven’t quite worked out so well in life.

I think my home is right here, right now. With my Editor/Husband, the bushel of cats, and the brand-new barn (and unfinished porch). I like coming home. To here. 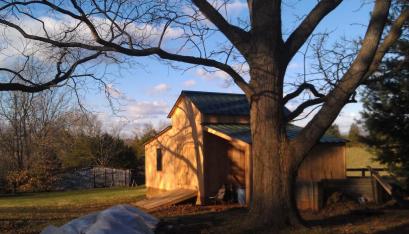