I know, I know – the “Americans” won America’s “World” Series. How not-very-worldly of us.

(The Boston Americans, by the way, included Cy Young, the winningest pitcher in the history of baseball. They would occasionally take spring training in Charlottesville, Virginia – just down the road from me. In 1908, they started calling themselves the Red Sox and are known today for their generous facial hair.)

My Canadian friend Susie (hi Susie!) always reminds me that Canada “invented” baseball. And, while that’s not exactly true, it is not exactly untrue either, and it’s quite a bit truer than Abner Doubleday’s claim, which isn’t true at all.

But, what is true is that Jackie Robinson’s first professional integrated regular season games were played with the Montreal Royals, the Brooklyn Dodgers’ farm club. And, what is also true is that Robinson called Montreal one of his favorite places because the people there were “warm and wonderful” and treated the Robinson family with respect.

So maybe “World” Series is a bit of a stretch. But, at least the world plays baseball.

You want to talk about a stretch, how about calling the Winter Olympics the world’s games, when nearly half of the world’s population lives in countries that are snow free?

And, while there is no baseball in Antarctica, there are penguins and you can click here to play baseball with them.

Every other continent, not covered by an ice sheet, will have a baseball game going on in some field, or village, or town, or city, somewhere. And, the best of those players might get a chance in the big leagues.

Spoiler Alert: The Baltimore Orioles will win the World Series this season thanks to their off-season pick ups of pitchers Ubaldo Jimenez (Dominican Republic) and Suk-min Yoon (South Korea), and veteran power hitter Nelson Cruz (Dominican Republic, again). They will win despite the fact that they nearly signed, and then quickly unsigned, Grant Balfour, a seasoned, but moody, reliever from Australia.

The 2014 baseball season began this weekend in Australia when the Los Angeles Dodgers and Arizona Diamondbacks kicked off their first game at 4 a.m. EDT on Saturday.

I am an insanely passionate baseball fan. But, I did not get up to watch. The Orioles will play 162 regular season games in 2014, and I will try to watch them all (except when they’re on the West Coast playing and I’m on the East Coast sleeping).

There will be plenty of baseball that doesn’t require a 4 a.m. pot of coffee. 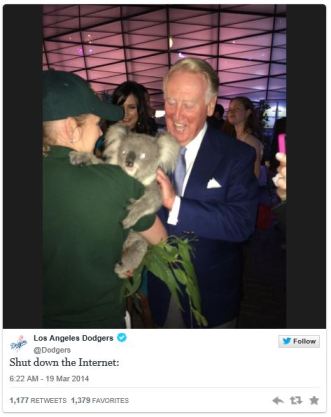 The two games this weekend were held at the Sydney Cricket Ground that was reconfigured for baseball. The New York Giants and Chicago White Sox played an exhibition game there way back in 1914.

The Giants won that game.

The Dodgers swept the Diamondbacks this weekend.

One of the fellas at the MLB channel called the Cricket Ground a mix of World Cup and Wimbledon.

I love baseball’s international spirit.  I love that players come from all over, and a team may have two or three translators hanging around the dugout to help everyone communicate.

Players from Japan and the Dominican Republic and Cuba are some of the best players in major league ball today.

But, baseball also thrives closer to home in Indian Nation.

I just discovered that Jacoby Ellsbury and Joba Chamberlain are Native American.

National Public Radio’s Only A Game had a wonderful story this weekend about baseball and Navajo Nation.  Click here. 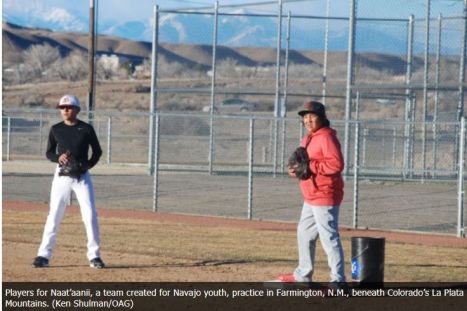 This season, the Class A Spokane Indians will honor the tribes of the Pacific Northwest by wearing the Native American Salish language on their jerseys.

Spokane, in Salish, looks a bit like a cat just ran over the keyboard, or something like this: 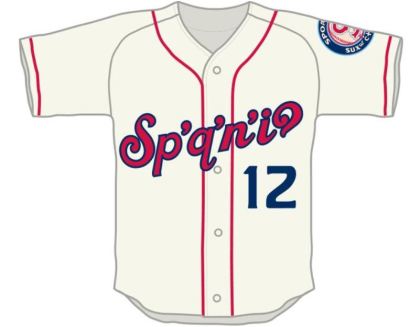 (I think Sp’q’n’i is about to make my spell-checker explode.)

Baseball season is finally here. You know what to do.

Root for your “home” team … whether it’s the Baltimore Orioles (whoo!) or the Toronto Blue Jays (hi again Susie!), or an outfielder from Cienfuegos, Cuba or an infielder from Puerto Cabello, Venezuela, or  a pitcher from Habikino, Osaka, Japan.