Before today, I knew just three things about Nebraska:

1) They have the only unicameral legislature in the country.

2) Carhenge is there(and I once forced Editor/Husband to go there and he got me a tee-shirt).

3) The College World Series is played every year in Omaha.

I’m sure Nebraska’s a very nice place, and despite a strong argument that inventing Kool Aid is pretty awesome, I think my Top Three list hits the high points.

(Editor/Husband would like me to point out that Bob Gibson, Rex Barney, Gregg Olson, and Sloppy Thurston are all from Nebraska, and I shouldn’t be so fast to close the door on interesting facts.)

But, this post isn’t about Carhenge (which means many of you will just stop reading now).

It’s about this: the University of Virginia Cavaliers will be playing in this year’s College World Series which kicks off this weekend.

To join the seven other teams in Omaha, UVa first had to emerge from a weekend regional tournament (where they beat Bucknell once and Arkansas twice) and last weekend’s Super Regional best of three against the University of Maryland Terrapins.

Editor/Husband and I went to every game.

It came down to Game 3 on Monday night against Maryland. And, at the risk of burying the lead, which I’m afraid I’ve already done, this happened at 10:17 p.m.

Followed closely by this …

You can see the dogpile ballet in slow motion here.

You can see the team climbing into the bleachers with us here.

You can almost see me. 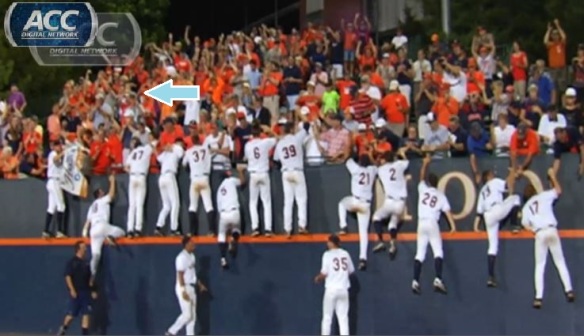 A recap of the Virginia/Maryland weekend:

It was during that especially hot and humid day game that I nearly succumbed to heat exhaustion. I’m not kidding. I almost passed out.  It took two bottles of Gatorade before the field stopped spinning. My face was covered in a thin layer of grit which I later discovered to be salt that my body had leached completely out.

Editor/Husband was impressed that despite my weakened state, I was still scoring the game on my scorecard.

ME: If I die you’ll need to write something on my blog to let people know I’m dead.

ME: Tell them I died at a baseball game, it will make a better post. 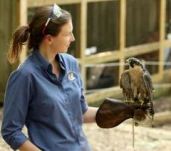 Rehydrated, I rallied for Game 2.  So did UVa.

And, it came down to Monday night’s Game 3. 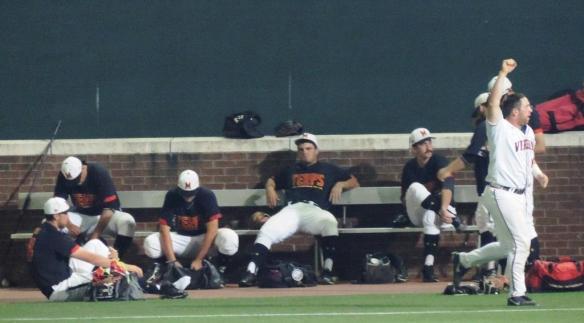 FUN FACT: The University of Virginia Cavaliers are known informally as the Hoos, which is short for Wahoos.  Back in the 1890s, baseball fans at Washington & Lee University called UVa’s baseball fans a “rowdy bunch of Wahoos.”  The name stuck.  (UVa didn’t become the Cavaliers until the 1920s.)

You can see University of Virginia take on Ole Miss in the first round of the College World Series this Sunday, June 15, on ESPN2 at 8 p.m. EDT.

If you do, you’ll likely see this guy … 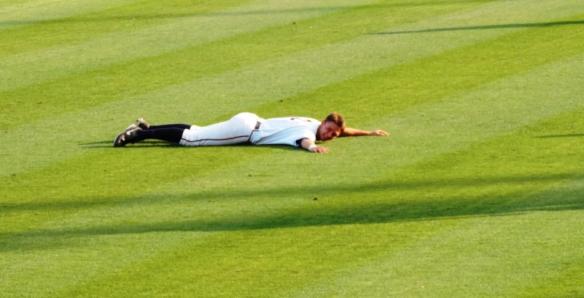 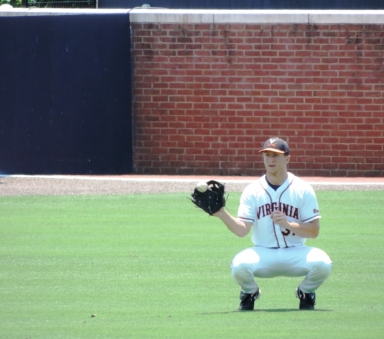 “Fish” threw a lot of foul balls into the stands this weekend.  I nearly caught one. 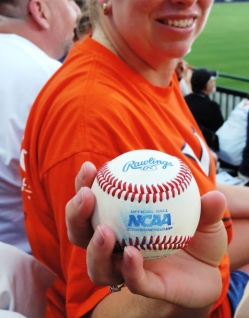 She caught it instead.

And, this is Wyatt.

He goes to almost all the UVa home games and sits just a few rows down from us.

Wyatt’s either happy the Hoo’s are winning or happy that his mom just bought him some ice cream.