“You could be a kid for as long as you want when you play baseball.” ~ Cal Ripken, Jr.

Seeing kids play baseball is like reliving your own life when you were a kid. You look at them out there in the grass and it reminds you of something you did during a game a long time ago. (Like dropping the easy fly ball to right. Yup, sometimes the memories are harsh ones.)

But, sometimes you can look at a kid out there in the grass, playing a kid’s game, and you can see the future. Their future.

You can watch that same four-year-old kid on the mound and you can wonder where his future will take him.

Or, you can invent his future. And, it’s always a good one. And, he never drops the ball.

It was Grant’s birthday when I found him and his dad playing baseball. It was, his dad told me, the only thing he wanted to do on his birthday … play ball. That was a couple years ago. The original post is here.

Grant didn’t know me and he didn’t pay any attention to me. He didn’t pose. He just played.

I haven’t seen him since.

To see a four-year-old love the game is also to see our future. And, there’s still baseball in it. Whew. 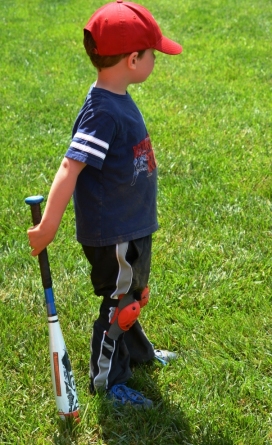 24 thoughts on “The Future Of Baseball”