When a ballplayer’s career in the majors is brief – just a game or two – he is said to have had just “a cup of coffee” in the big leagues.

So, if your time in the town where you were born was brief, does it become your “cup of coffee” hometown?

Clay Bryant had more than a “cup of coffee” with the Chicago Cubs. 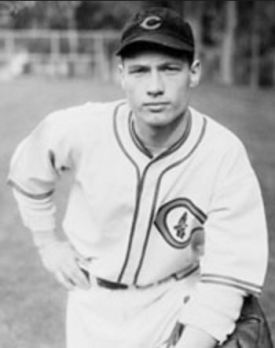 The right-handed fastball pitcher spent about six seasons with the Cubs – from 1935 through 1940 – including their pennant-winning and World Series-losing 1938 season.

It’s his birthplace that’s the cup of coffee in this story.

Bryant was born in 1911 in Madison Heights, Virginia.

He wasn’t there long. Maybe a year – or a couple of years at most – before the family moved to Birmingham, Alabama, where his father found work as a pipe fitter. And, that’s where they stayed.

But, being born in Virginia, cup of coffee or not, gets you on my Virginia-Born Project list, even if everyone in baseball forever knows you as “the big, curly-headed kid from Alabama.”

Bryant dropped out of high school when he was 16, and left Birmingham to work his way through the minors. He was called up and played a few games for the Cubs in 1935, and settled there in 1936, where he played until his arm finally gave out in 1940.

Cubs fans who know their history remember Bryant for just one season – 1938.

Toward the end of August, with just a couple weeks left in the ’38 season, the Cubs were stuck in 4th place, nine games out of first. They were so far out of the running that the Pittsburgh Pirates had already begun printing tickets and making arrangements for their trip to the World Series.

Out of nowhere – and behind the pitching of their ace Bill Lee, Bryant, and Dizzy Dean – the Cubs rallied. They went 19-3-1 in September and captured the pennant. 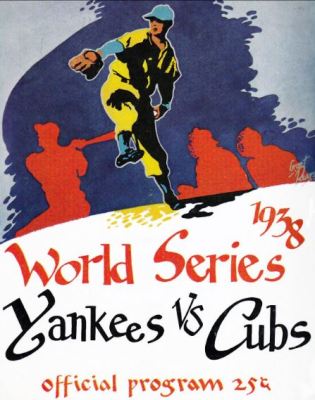 You don’t have to know much about baseball to know that the Cubs didn’t take the Yanks apart. They were swept by the Yankees, who were huge favorites and are still considered one of the best teams ever.

Everyone knew that Chicago’s arms were tired from the pennant chase. When pressed, player-manager Gabby Hartnett insisted they’d be fine. “All they need is a good sleep, a couple of steaks under their belts and some batters to stand up in front of ’em,” he told reporters.

After two losses at Wrigley, Bryant started Game 3 of the Series in New York. He didn’t give up a hit until, with two out in the 5th, he gave up a home run to Yankees infielder Joe Gordon.  He gave up one more run before getting out of the inning. Then, with one-out and bases loaded in the 6th, it was Gordon again, this time singling in two runs.

“Clay [pitched] his arm off and his heart out,” The Philadelphia Inquirer reported the next morning.

Strangely, I can find the complete radio broadcasts of Games 1, 2, and 4 online, video even of Bill Lee and Dizzy Dean. But, no Game 3. No Clay Bryant. Nothing.

Here’s rare home-movie footage of a 1938 Cubs game. (Dear Youngster, home movies are like cell phone videos, only the camera is bulky and you have to pretend you can hear sound.) I can tell you nothing about this game except that Cubs fans sure liked cigars.

A bad shoulder, a never-quite-healed-right fractured elbow in the minors, and bouts with a dead arm made Bryant’s seasons in Chicago spotty.  His 40 games and 270 innings* pitched in 1938 may have carried the Cubs to the World Series, but it did his arm no favors. By 1941, not yet 30, Bryant’s major league career was over.

Bryant settled in the minors, becoming a successful minor league manager, mostly in the Dodgers and Indians farm systems, until his retirement in 1974.

Bryant, managing the minor league Los Angeles Angels in 1957, poses with Betty White as a promo for her television series A Date With The Angels.

Bryant and his wife had settled in Zanesville, Ohio during his career, and they retired to Florida. He died there in 1999 at the age of 87.

And, the hometown listed in the obituaries that ran on sports pages around the country? 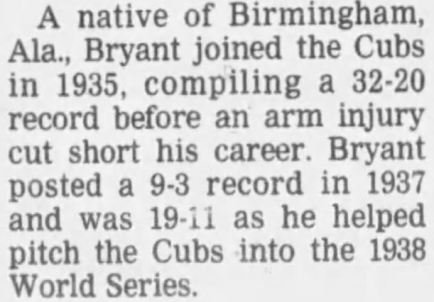 “A native of Birmingham, Alabama.”

(You can read a much more detailed bio of Bryant here.)

He may not have ever called it “home,” but Madison Heights, Virginia was where Bryant was born – despite what his obituary tells you – so that’s where we went.

It isn’t much of its own thing anymore. Instead, it presses so hard up against Lynchburg, its nearest neighbor, that you can’t really tell where Lynchburg stops and Madison Heights starts.

We were there just long enough to follow the GPS to a spooky part of town where we found a rundown ball field partly under water. 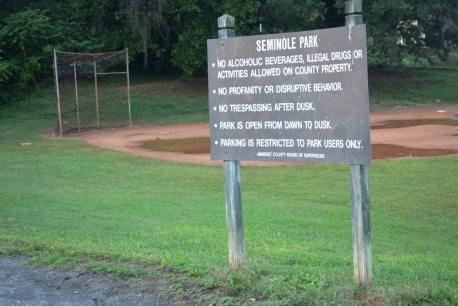 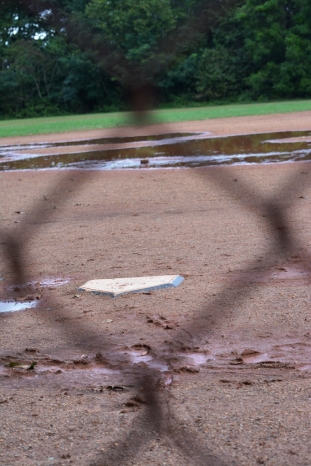 Every city has its own version of Madison Heights – it’s that place that time has absorbed until it’s become the outskirts of another place and not really its own place anymore. It’s a highway lined by old businesses, fast food places, dollar stores, and Jiffy Lubes. 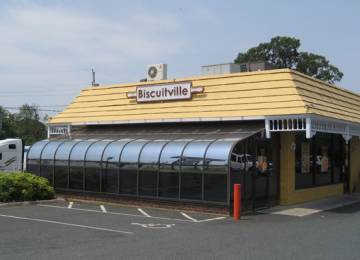 I’d never heard of Biscuitville. It’s a North Carolina chain that has a few scattered locations in Virginia – the northern-most one is in Madison Heights.

I could live in a place called Biscuitville.

When I was small, my parents and I would go out to breakfast every Sunday after Mass. It was a place in Modesto, California called the Sundial.

It was the restaurant in Modesto back then. Errol Flynn, Emperor Haile Selassie, and Vida Blue all ate there at one time (presumably not together).

But, they didn’t eat there every Sunday like we did. The Sundial made biscuits which they served occasionally with their omelets and such. I didn’t want an omelet. I just wanted biscuits. So every Sunday, even though it wasn’t on the menu, the staff filled a basket with hot biscuits, and served it to me. Just me. I was the only person who got a basket of biscuits for breakfast at the Sundial. (I’m sure if Vida Blue had asked they might have made an exception for him.)

I know what you’re asking. How was Biscuitville? I don’t know. Biscuitville should be a place that only serves biscuits. With a side of butter, or maybe jelly. Possibly gravy, but let’s not get all crazy.

In the case of Biscuitville, they cover every single one of their biscuits in meat. Chicken, catfish, barbeque, and something called the Cackalacky Chop which is pork marinated in, hang on, Cheerwine.  (If you don’t know Cheerwine, it’s a Southern thing … think, cherry cola with more cherry than you think proper.)

So, yeh, Biscuitville was a tease. They might as well put a big neon sign out front that said MEATVILLE.

But, I could still live in a place called Biscuitville.

For more on The Virginia-Born Baseball Project visit here.

9 thoughts on “Clay Bryant – The Alabaman From Virginia”