His curve is a beauty,

His fast ball has the hop,

And his control is so good

He may land on the top. 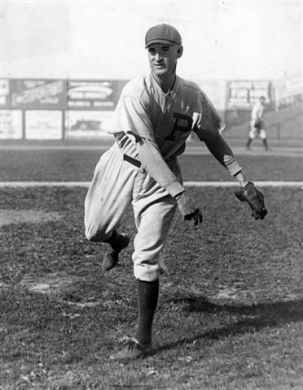 Sullivan pitching with the Philadelphia Athletics, 1922.

Jim Sullivan’s story is that of a 1920s-era right-hander who never could figure out how to control his fastball. (George MacKay’s rhyme was really just wishful thinking). It’s also a tale of three cities. And, a story about a cow wearing a Christmas hat.

(If the promise of a cow wearing a Christmas hat doesn’t keep you reading, then, clearly, you’re not the person I thought you were.)

Jim Sullivan was born in Mine Run, Virginia in 1894. 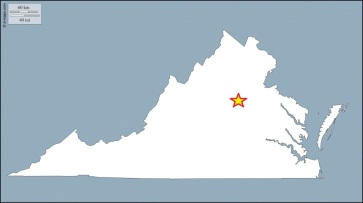 The Sullivan family didn’t settle forever in Mine Run. By the late ‘teens, Sullivan is playing professionally and his family is in North Carolina. Later, he spends an off-season with his father in Kentucky.

He played parts of the 1921 and ‘22 seasons with the Philadelphia Athletics and two games with the Cleveland Indians in 1923. 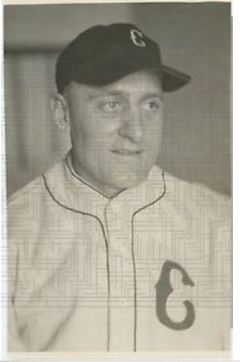 (Keep reading. I promise … Christmas Cow is on the way …)

In between those little trips to the big leagues, Sullivan played a few seasons with the Baltimore Orioles (then a minor league team), as well as with minor league teams in Portland, Oregon; Kansas City; and Decatur and Evansville, Illinois.

At every single stop – minors to majors to minors – Sullivan showed potential, but ended up wild or disappointing.

(See, Orioles fans, unreliable pitching was a problem for the O’s 100 years ago, too.)

It was while an Oriole that Sullivan got the most press of his career. It was on August 22, 1920, for a game he didn’t even play in.

After losing the game 2-1 in Buffalo, the Orioles were headed “peacefully toward their clubhouse” when “one of the spectators tossed a bottle which struck Sullivan just above the left ear,” The Baltimore Sun reported. “Sullivan fell to the ground stunned, while blood was flowing from the ugly wound the missile inflicted. The offender escaped.” Sullivan was knocked unconscious, but wasn’t badly injured.

That’s the most color you’ll get from Sullivan’s career.

Everything else the sports pages give you about Sullivan quickly starts to sound the same:

Jim Sullivan was, The New York Times said, “tall, high-strung, and right-handed.”  To The Baltimore Sun, he was “wild as a March hare.”

But, no one plays as long as he did without having something — something that might have been fleeting, but was occasionally brilliant. And, that kept Sullivan in the game.

Sullivan’s greatest game was the one he wasn’t even supposed to pitch. And, which he lost.

On October 1, 1921, the New York Yankees were one win away from the pennant. The Philadelphia A’s were about to finish their season with 100 losses, in last place.

It was a Saturday double-header at New York’s Polo Grounds.

“I was up against it,” A’s Manager Connie Mack said later. His ace was ill and the other pitchers weren’t ready. “Therefore I had to call on Sullivan to pitch the morning game. I know he is a fair hurler but never expected him to do so well against such a hard-hitting club. The breaks were against him or we would have won.”

Sullivan’s 5-3 loss to the Yankees gave the Yankees the pennant – their first ever.  His loss is unfortunate, since his outing was pretty sweet – he pitched all eight innings and just two of those runs were earned. He gave up eight hits, just one for extra bases, and kept Babe Ruth hitless in four at-bats. (Or, as The New York Times reported, “Babe Ruth took a batting siesta.”)

It was the second game, the now-meaningless one, that got the press.  With the pennant clinched, Yankee’s Manager Miller Huggins rested most of his regulars in Game Two and then let Ruth pitch the last four innings of the game. The Babe gave up six runs, but got the win anyway, in a game The Times called a “comedy that wound up the happy afternoon.”

The A’s were high on Sullivan at the end of ’21. But, in early 1922, his arm starts to bother him. He has some good games for the A’s, but some are not so good. By the end of the season he’s back in the minors.

Sullivan never makes it back from that bad arm. He settles in Arlington, Virginia and manages a Safeway in Washington, DC.

In 1950, his wife of 24 years is granted a divorce on the grounds of desertion. They have no children. He dies in 1972 somewhere in either Washington, DC or Maryland, but pretty much just disappears without a trace.

Which brings me back to Sullivan’s birthplace. Mine Run.

Baseball Reference, the go-to for baseball facts and my Virginia-Born Project, says that Sullivan was born in Mine Run.

There isn’t much there today.

Those who consider Civil War battlefields the perfect vacation spot can tell you all about the 1863 Battles of Mine Run.  Quick recap: The battles turned out poorly for the Union and for the nearly 2,000 soldiers who were killed over the seven days of fighting (1,272 Union, 680 Confederate).

Today, Mine Run encompasses a wide swath of homes, ranches, and farms.

And, a ball field.

If you are of a certain age (let’s say, over 40), you probably had a store like Dulin’s in your town when you were growing up, and today that store is gone and you are sadder for it.

Dulin’s has what you need. And, what you didn’t know you need, but now cannot live without.

The kind of place where you might have to dig around to find what you’re looking for, but it’s so much better than just going on Amazon.  And, seriously, Amazon doesn’t have this.

It’s the kind of place that still gives you a nice calendar at Christmas. 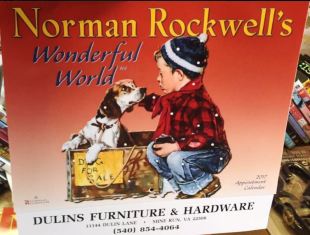 Milton Kennon’s grandfather opened the store in August of 1932 and Milton owns the store today.

He’s been working there since 1957, when he was just 12 and would help out after school.

But, what if Baseball Reference was wrong about Sullivan being born in Mine Run?

Because Sullivan’s World War One draft card says he was born in Paytes, Virginia.

Paytes is right next door to Mine Run, and my friend Nancy knows her way around both.

Paytes doesn’t really exist anymore, so you need someone like Nancy who can show you where it once was.

There were plenty of Sullivans in the area when Nancy was growing up in the ’60s and ‘70s and the Sullivan boys all played ball. Most of them are still nearby, and Nancy checked with them but they’d never heard of any Jim Sullivan who pitched for the A’s and Indians. 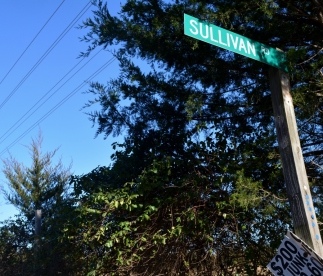 Here is Sullivan Road, a narrow gravel road, which at one time probably went back to the old Sullivan place, but now just dead-ends at this fence.

But, what if Sullivan wasn’t from Paytes either?

Because his World War Two draft card says he was born in Louisa, Virginia.

And, I can show you some brown winter grass from the side of the road in Louisa.

The cow, I’m afraid, is not from Mine Run. Or Paytes. Or Louisa. But, it comes from Belmont which is right next to Paytes, and since Jim Sullivan seems to have listed several birthplaces over the years, who’s to say he wasn’t born in Belmont?

Lucy the Christmas Cow is from Glenburnie Farm.

My friend Nancy and her daughter-in-law Molly braved a very cold morning to dress Lucy in a Christmas hat and garland simply so I could take a photo and share it with you. (I tell you, Belmont folks are the nicest folks.) 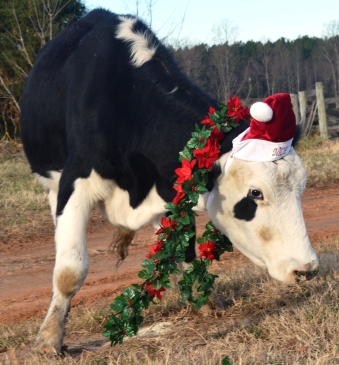 Lucy was not too keen about the garland.

I can’t tell you for sure if Jim Sullivan was born in Mine Run, Paytes, or Louisa. Just take your pick, ok?

But, I can give you another picture of Lucy the Cow in her Christmas hat.

Thank you to Nancy Biscoe for helping me unravel this story. Thank you to Molly Biscoe and Glenburnie Farm. And, special thanks to Lucy the Christmas Cow, a very good sport.

For more on The Virginia-Born Baseball Project visit here.

15 thoughts on “Jim Sullivan — Mine Run, Virginia & The Christmas Cow”