Back in May, the New York Yankees beat the Chicago Cubs 5-4. It took 18 innings and 6 hours and 5 minutes. The game started on May 7 and ended on May 8.

The game ran so long they ran out of baseballs. 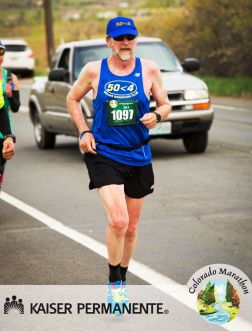 I hate math, but by my inexpert calculations, Benji could have run a marathon-and-a-half in the time it took the Yankees to win that single game.

Benji ranked among the top 10 U.S. marathoners for six straight years in the 1980s. He was ranked seventh in the world in 1982.

He has trophies, awards, and ribbons galore celebrating his still-running running.

(I have one award, in case you were wondering, from the time I won a Jell-O contest where I built an amazingly lifelike Washington DC Metro car out of Jell-O, clogged with unsmiling peanut passengers and stuck in a snow drift made out of stale miniature marshmallows. This was a long time ago, and it’s still one of my proudest moments. I won a sash cut out of butcher paper with “Miss Congealiality” written on it in Sharpie. I still have it. The sash, I mean. I still have the sash.)

Please note the period. Jell-O is a complete sentence.

Back to Benji. To add to his still-growing list of accolades is this – Benji Durden is the 4,000th follower of The Baseball Bloggess.

(I know. This accomplishment falls a little flat, especially now that you know about the Jell-O award.)

Real bloggers know that, like my Jell-O Metro car, blog follower lists can get clogged with a lot of spam, weird bots, and people whose names resemble passwords. (Hi, 5nML$234HN00C!) No one is quite sure why this happens or what’s in it for the bots that follow. So, while 4,000 is a real number, it is also an unreal number, and I can say that my real live readership – of non-bots who speak English and like to read about baseball – is smaller. Much smaller. Much, much smaller.

When I suggested to Benji that he could have run a marathon-and-a-half in the time it took the Yankees to win their game last May, he told me:

“While the math works for me to run 39+ miles in six hours, the physiology probably doesn’t. I imagine the best I could hope for would be something around 36-37 miles before fatigue won.”

“I think the fact that there are fans that were focused on an outcome of a baseball game that took that long is one of the interesting things here. I don’t know too many fans that could watch a runner for six-plus hours.”

Here are the six-hour baseball fans …

We are the remaining few still sticking around. I guess we are in it until the end. #Yankees #Cubs pic.twitter.com/Al6f8gAfk5

Since Benji has lived in Colorado for many years, I was readying five incredibly witty, fun Colorado Rockies facts to celebrate Follower 4K, including this epic public safety solar eclipse message shared by the Rockies on their Jumbotron last week:

Then, Benji tells me this:

“The last time I was in a baseball stadium was back in 2007 when [Benji’s wife] Amie and I ran the Rockies Run 5K that finished with a lap around the warning track at around 2.5 miles then finished in the stadium parking lot. I think I might have last been at a game back in the mid-70’s when I sold beer at an Atlanta Braves game as part of a fundraising effort for the Atlanta Track Club Elite team. We were raising travel money.” 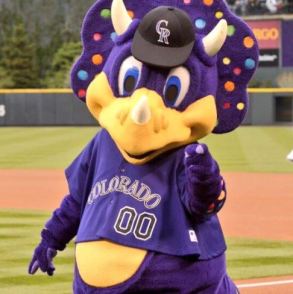 Sorry Dinger, Benji’s just not into you.

So, instead of sharing my Rockies facts, let’s go with Benji instead. Here are five things you should know about Benji Durden.

You may remember that 1980 was the year the United States boycotted the Olympics which were held in Moscow. Benji, ranked #13 in the world at the time, was a member of the team that never competed.

Some of the 1980 Olympic track and field team “like Carl Lewis, were medal contenders and were not able to reach that elusive goal. Others, like me, only had the one window in their careers when the Olympic Dream could be fulfilled. For most of us, it was also a motivation to keep competing to make up for that lost moment. It also made us a bit more celebrated by what we were unable to achieve.”

Durden, finishing behind Tony Sandoval in the 1980 Olympic Trials

“Going into the Olympic Marathon Trials we knew that the team would not be going to Moscow. This kept a few of the top contenders from even starting the race. I was not a favorite to make the team with a 2:13:47 personal record, so I was there to run my best and place as high as I could. Finishing second in 2:10:41 was more than I expected and was an emotional high.”

Runner’s World and others reported that Benji trained for the Olympic trials by running in layers of sweat suits in the heat and humidity of Atlanta.

In 1976, Benji was a member of the Atlanta Track Club Elite men’s team that set the 24-Hour 9-Man Relay World Record. The record still stands today, Benji says, “mostly because good runners don’t do this anymore.”

“The way it worked is each runner in turn ran a mile (four laps of the track) and when everyone had their turn you went again. We lost three runners to injury by the time we were about 10 hours in, so our recovery time got shorter. I ran the most distance, 37 miles, averaging just under a 4:50 mile, and as a team we averaged just under a 5:00 mile. The run/rest/run/rest cycle got progressively more difficult.”

3. Benji has finished more than 100 marathons and has run marathons in all 50 states.

… Including finishing third in the 1983 Boston Marathon, still considered one of the deepest American marathons ever.

“Many of us were at our lifetime peaks, though we didn’t know it at the time.”

1983 Boston Marathon, Durden, third from the left and wearing #6, is pointing at a competitor who was wearing headphones as he ran. 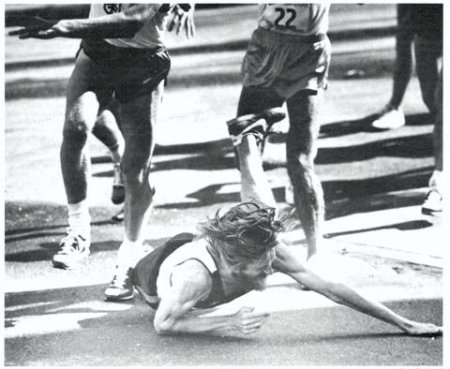 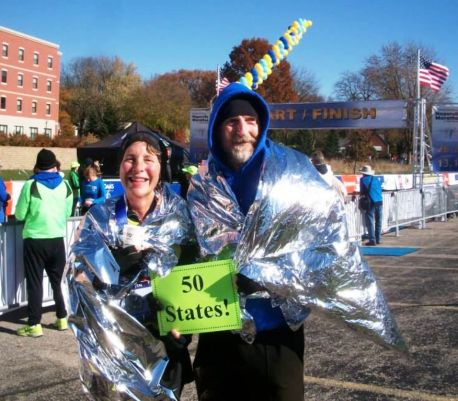 4. NIKE designed a shoe for Benji.

Eagle Prototype designed for Durden for the 1980 Olympic Marathon Trials

5. In 2016, after more than a year of not feeling well, being diagnosed with anemia, and noticing a marked decline in his running, Benji was diagnosed with colon cancer.

“I knew something had been off with my running since at least 2014, but I thought it was just age slowing me down. I also had trouble believing I could be sick until it was obvious I was. Then it made sense. Staying fit isn’t enough to stave off reality.”

In July 2016, he underwent surgery to remove a tumor in his colon. In August, he began a course of regular chemo treatments that continued into January 2017.

He kept running, even though it was slow-going some days and often difficult.

“I dropped back to walking initially to reduce the stress on my body. But I found that movement helped me cope with the side effects of the chemo and walked and ran as much as I could covering 70 or more miles most weeks.”

“I gradually added small amounts of running back as chemo started and was running 45 minutes at a time by January. Around Thanksgiving I walked and ran a half marathon in 2:14.”

“I’m running quite a bit faster than I have in the last three years. It shows the value of having red blood cells.”

Since chemo ended, his checkups have been positive.

“So far I’m looking good. There is every reason to believe the cancer is gone, but the doctors will be watching for a few years to be sure.”

“I stay in condition by making my running my first priority. I try to get in two to three long runs per week with one or two short easy days in between. As I get stronger I add a day of faster running into the mix. I listen to my body and try not to over train. Consistency is the biggest secret.”

“I played softball in a church league for part of a season when I was in the seventh grade and played shortstop. … I got hit a couple times and had a few near misses by my head. This was before helmets and I decided not to stay with the game.”

This was about to end up being the most baseball-less baseball post ever. And, then … this.

“A Braves player and I were the local celebrities that came and signed autographs. I remember the event, but I don’t remember meeting and signing an autograph for Amie, so this is her story really.”

Amie, also a competitive long-distance runner, doesn’t remember the Braves player there that day either – Brett Butler or Dale Murphy is her best guess. “I always thought it was kind of fun with everyone hanging around the Braves guy and me wanting to meet the runner.” They married in 1989.

Benji and Amie finishing the Colorado Marathon, May 7, 2017

Sure, I know that 4,000 followers won’t read this. But, I’m all about quality over quantity anyway. I’m glad to have Benji drop in for a read from time to time.

Benji’s birthday is Monday, August 28. The Baseball Bloggess family is a friendly one, so leave a Happy Birthday message for Benji, our 4K, in the comments, won’t you?