Look, I’m not one to tell you what to do with your Labor Day Monday. You worked hard for this day off. You should enjoy every single minute of it.

If you think napping in a hammock is the best way to celebrate, then, hey, I’m not going to tell you to do anything different.

Really? Hammock napping? That’s the best you can do?

What if it rains?

Here’s what you should do with your Labor Day Monday.

Artie Lewicki pitching for Virginia in 2014

Last week, the Tigers traded Cy-Young-pitcher-with-the-hot-model-girlfriend Justin Verlander and a boatload of cash to the Houston Astros for a handful of prospects (none of whom was rookie outfielder Derek Fisher, so I immediately lost interest in whatever prospects the Astros gave up).

Into Verlander’s spot in the Tiger’s rotation? University of Virginia alum Artie Lewicki, who will make his big league debut, getting his call up from the AAA Toledo Mud Hens.

He’s one of those hard-working pitchers. Nothing fancy. I think baseball would call him a “Grinder.”

In 2014, as a senior, he helped the Virginia Cavaliers to the College World Series. (They finished second to Vanderbilt that year.) 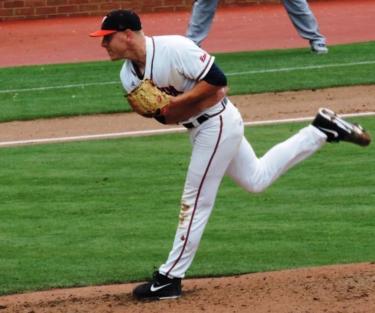 He was named to the College World Series and Charlottesville Regional All-Tournament Teams.

Artie Lewicki, front/left, leads the Virginia celebration with the fans following their win over Maryland in the 2014 Super Regionals, which sent them to the College World Series.

Lewicki’s senior season at Virginia, where he went 8-1 with a 1.31 ERA as both a starter and reliever, came after being limited to just two innings in 2013, following Tommy John surgery.

“Artie is a strike-thrower with outstanding stuff,” Virginia coach Brian O’Connor said at the time. “I’m sure the Detroit Tigers are very happy they selected him.”

Lewicki was drafted in the eighth round by the Tigers in 2014.

Lewicki is the kind of guy you root for. The stick-to-your-business-and-just-pitch kind of guy. The kind of guy who I once saw crouch down so that he could talk more easily to a small young fan.

You know the kind, right?

Artie Lewicki starts tomorrow for the Tigers. (I knew I’d get to write that someday.)

Some day, a few seasons from now, you’ll be back in your hammock talking baseball with your friends. And, you’ll say: “Lewicki? Yeh, he’s something. I saw his first big league game.” (You won’t remember to thank me for it. But, you’re welcome anyway.)

The Tigers play the Kansas City Royals on Labor Day at 1:10 p.m. (MLB.TV, Sirius Radio, MLB Extra Innings will have it. Look around, you’ll find it.)

POST-GAME UPDATE: OK, so the Tigers lost 7-6 today and Artie took the loss. He went 5 innings, gave up 5 earned runs, K’d 1, walked 1. But, he never got rattled, never looked lost. It was a first game. I like his chances next time. Here’s his post-game interview.