Dad Clarke never married. He had no children.

He is the only childless “Dad” I know.

I wonder if that seemed peculiar to him? To be a Dad in name only?

There are a lot of dads in baseball. The lower-case, fathers-with-children kind. Some ballplayers today have kids like other people have Tupperware. Just lots of kids. Preternaturally fertile, these players.

(Full disclosure: I am a kidless writer. I do not know beans about parenting. But, I had a dad, and I called him Dad, so I’m confident that I’m qualified to write this.)

There are only a handful of ballplayers who, over the years, were known primarily as “Dad.” Not as a sometime nickname, but as the name that overrode the name they were given.

The list of six – culled from Baseball Reference – is sort of strange.

Six players, none of whom played after 1902.

All were called Dad at a time when most dads were still called papa. Dads and daddys were new to the father-name game, which makes a Dad rather strange.

Dad Clarke played the longest of the six and, indeed, reporters typically called him Dad. But, the Dad thing doesn’t stick as well on the other five. Let’s tidy things up.

William “Dad” Clarke – that Dad who had no children – pitched in seven big league seasons between 1888 and 1898, primarily with the New York Giants. (Minor league stints make up the difference.) 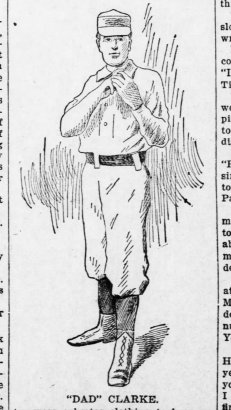 I dunno. He doesn’t look that old to me.

Indeed, reporters in Omaha, where he played minor league ball, called him Dad or “Old Dad” as early as 1889. They also called him “a pleasant mannered little fellow.”

And, in 1890, the Minneapolis Star-Tribune called him “the only and original Dad,” which makes me wonder, were there other Dads pretending to be that Dad?

Clarke wasn’t called Dad because of his kind and fatherly ways, that’s certain.

He was known for his trash talk, particularly while pitching. “If I had nobody but stiffs like you to pitch to, I’d never lose a game,” he hollered to one batter, according to a wire service story in August 1895. Two swings later, the batter grounded out. “Didn’t I tell you?” Clarke yelled.

“He was a consummate bench jockey,” Terry Bohn writes in Clarke’s SABR bio, “constantly offering wisecracks and insults from the mound, dugout, or as a base coach. Clarke was a headache for his managers and the opposition, but was loved by his teammates and fans.”

He gambled. He drank. Sure, they all did back then, but he did more than most.

His pitching was erratic at times and so was his mood. Once, when a batter got a hit off of him, Clarke angrily chased him around the bases hoping he could stop him from scoring the winning run. (Fun fact: that’s not how baseball works.)

His obituaries called him Dad.

There is a Dad Meek, who played around the same time in California and in other minor leagues. But, he is not Frank Meek.

Dad Meek, the minor league one, is beloved in California and nearly always referred to, in quotes, as “Dad.” Frank is not. But, I can see how the two might have gotten confused.

Edward “Dad” Lytle played just one season (1890) in Chicago and Pittsburgh, and is notable mainly for being the first major leaguer to hail from Racine, Wisconsin.

Not much was written about Lytle and his one season of big league ball. But, “Dad” Lytle is mentioned from time to time, along with teammate Spitless Willie, a few seasons later when Dad played minor league ball in California. So, “Dad” he was.

Should your dad happen to live in Dad Lytle’s hometown of Racine, I encourage you to treat him today to a Kringle from the O&H Danish Bakery, followed by Racine’s annual Father’s Day Putt Putt Golf Tournament and BBQ. 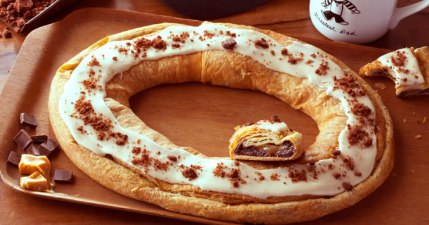 Arthur “Dad” Clarkson, a Harvard man, played five seasons – from 1891-1896 – wandering from New York to Boston to St. Louis and finally in 1895 and ’96, Baltimore. Those were Baltimore’s pennant-winning seasons, and Clarkson’s 20 games in ’95 were strong, but by ’96 other stronger Orioles pitchers had relegated Clarkson to the bench.

He is not called Dad, but is simply “Arthur Clarkson of the championship Orioles,” when in January 1896 he is reported missing and presumed drowned after he and two friends go out on an iceboat on Saginaw Bay and don’t return.

“It is feared by their friends that they have gone through the ice” is reported widely across the country.

Reported far less widely is the discovery a few days later that Clarkson and friends have been found safe and sound on the other side of the Bay.

The Cincinnati Enquirer in May 1896 described the not-dead and not-Dad Clarkson’s pitching style thusly:

“All the way from 25 to 30 seconds were wasted by the elegant Mr. Clarkson on every ball. First he would get in the box and draw up his arm as if he intended to pitch. Just as the crowd was expecting to see him send in the sphere he would drop his hand and take a survey of all the bases. Next he would get out of the box and look at the umpire. Then if everything suited him he would step back in his position. Once more he would survey the bases, and if there happened to be one of the Reds on a base he would make sundry and numerous motions as though he intended to attempt a throw. Then if everything had gone along to Mr. Clarkson’s liking he would raise his pitching arm above his head, lift his left foot, pose for a second or two, and then send the ball in.”

He was released by the Orioles in August 1896 and Clarkson complained that his release was timed so that he would have no share in the championship money the team earned that fall. 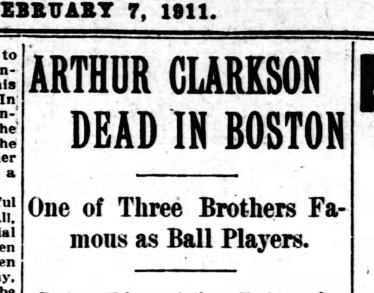 He seems to have picked up “Dad” or “Old Dad Clarkson” in later years when sportswriters in the 1920s and ’30s began to write wistfully of how much better baseball was “back in the Gay Old ’90s.”

His older brother John, also a pitcher, won 30+ games six times and is in the Baseball Hall of Fame. Younger brother Walter also pitched in the big leagues.

Alfred “Dad” Clark played just 12 games in 1902 for the Chicago Orphans. Was he really called Dad? No clue.

But, Rufus “Dad” Clark, the “Potato King of Colorado” was definitely known as Dad Clark and occasionally known as “Potato.” In 1859, he started farming on a 160-acre homestead at the location of today’s Highlands Ranch Golf Club, southwest of Denver. His potato crops were legendary. 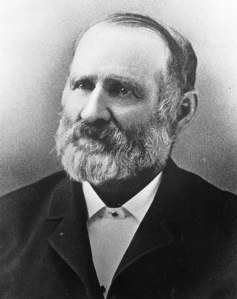 Dad Clark. Not A Ballplayer.

He has nothing to do with Alfred Clark the first baseman of 1902. But, as my Dad would agree, you gotta go with what you know.

“Dad” Hale is called Ray Hale and, sometimes, Roy Hale, often by the same newspaper. So, you tell me. He pitched just one season – 1902 – appearing in eight games with the Boston Beaneaters and three with the Baltimore Orioles.

So there you go. Six Dads, but just one, really. Dad Clarke really was called Dad.

There’s a moral to all this, I guess. And, this is what I think it is. There are a lot of dads out there – all kinds of them. But, when it comes down to it, the only ones who matter today are the ones that you call Dad.

My Father-in-Law. I called him Pops, which is just another way of saying Dad.

9 thoughts on “They Called Him Dad”