It’s the first thing I do every morning. I feed the three cats. They are my top priority and the cats expect no less. I could do it in my sleep and I think, in a way, that’s sort of what I do.

Memories get old and, eventually, blurry. Like the minutes when you first wake up, there’s still some nighttime left in your head. Those weird 4 a.m. dreams haven’t quite disappeared. You’re not asleep, but you’re not quite awake. It’s still a little blurry. 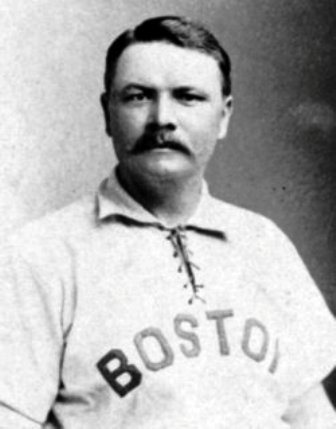 It was a long time ago. There’s no video, no newsreels, no oral histories hidden away in boxes, no people left who saw him play.

And, that makes me wonder about the things that Paul Hines did. Did he really do them? And, if he did, why are people so focused on proving he didn’t?

Census records consistently say his birthplace is “Virginia.” But, Virginia is a big place. I want to know where.

I recently suggested to a group from the Orange County, Virginia Historical Society that they should take Paul Hines for their own. If no one knows exactly where in Virginia he is from, why not? Let’s give his memory a home, maybe name a side street after him, have a day in his honor, or put up a plaque, a simple one, on Main Street.

At least a plaque.

While the coffee brews I will check my phone. Mainly to see what stories The Washington Post or New York Times pushed out overnight. If something really, really bad has happened that will disrupt the world – and my day – I want to know as soon as possible, so I can go back to bed. I check the baseball scores, too, if there are any.

It’s not until I find a story in an 1877 Cincinnati Enquirer that I learn that Paul Hines “was born in Virginia, about 15 miles from Washington, DC.”

Fifteen miles (and a mustache!). A clue!

Unfortunately, Orange County is 90 miles from Washington, DC, which deep-sixes my “Name A Side Street For Paul Hines” campaign.

This 1879 Atlas I found shows you everything within 15 miles of Washington, DC.

By this Atlas’s telling, Mount Vernon is the one Virginia place that is – exactly – 15 miles from Washington, DC. So, maybe?

I’m sure we all can understand that.

Maybe Paul Hines was from Mount Vernon, when it was still just 15 miles from DC. Before it moved away.

For those who have gone off to look at a map to share with me other nearby places that might be his home, or to show other – shorter routes – between Washington and Mount Vernon, I applaud your thoroughness, but I am just one cup of coffee into my morning. Mount Vernon will have to do.

That first sip of coffee in the morning, by the way, is the best sip of anything I can imagine. Things start to unblurrify. Progress.

While that “15-miles-from-DC” thing annoys me for being both very specific and not specific enough, there are far more important things we must clear up about Paul Hines.

Hines started his professional baseball career in Washington, DC in 1872. He was an outfielder, mainly, and known both for his bat and his speediness. 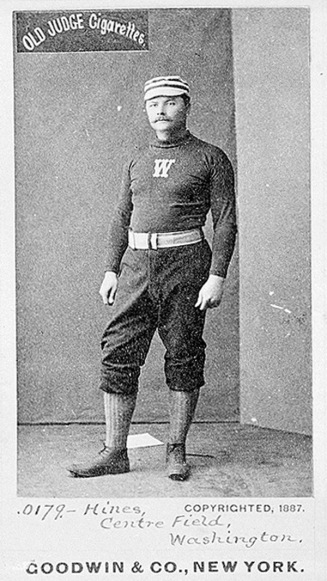 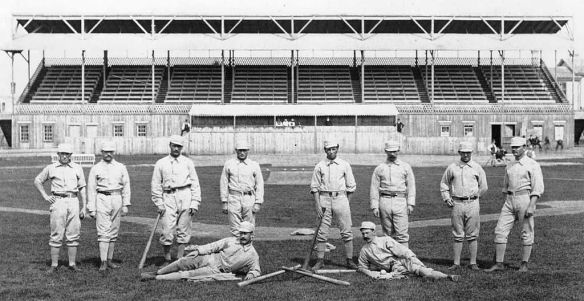 He played for 20 years in the majors. But, he’s remembered mostly for this.

And, Hines made the first unassisted triple play in major league history.

Or, not. Because people still argue about it.

And, I don’t know why, because The Boston Globe called it an unassisted triple play the very next day.

Do we have to argue about everything, people?

While Boston would go on to win the National League pennant and Providence would finish 3rd, there were 22 errors between the two teams that day – 14 for Boston, 8 for Providence. Things could get sloppy back then. And, sloppy games can take awhile. Two hours and 45 minutes to be exact, which would be whiz-bang today, but was long by 19th-century standards.

But, we only care about the 8th inning. And, just one play.

But, Boston is threatening – with no outs, Ezra Sutton is on second and Jack Manning is on third.

Jack Burdock, at bat, hits a high fly – a “twister,” The Globe calls it. Hines runs in from centerfield, catches the ball at the shortstop’s position, and keeps on running.

(Let’s stop here for a moment and appreciate that. Paul Hines runs in from centerfield, catches a fly ball at short, and keeps on running.)

The runners on base think it was surely a hit over the shortstop’s head. Apparently, neither bothers to look back to make sure. Both are past third and heading for home. By the time they realize the ball has been caught, Hines, still running, has reached third and tagged the bag.

“Without stopping in his run Hines kept on to third, which both Manning and Sutton had passed running home on the fly, and there stopping, Made a Triple Play with no assistance.”

So, shame on you MLB for not acknowledging it.

You may wonder why I’m just getting to this important facet of Hines now as I’ve already prattled on for quite awhile. I wonder that myself, but that’s the way his story rolls out … like a 4 a.m. dream that unspools out of sequence.

How deaf was Paul Hines?

Let’s ask a “peanut boy” at one of Hines’ games:

Or, how about the equally insensitive Dayton Herald that wrote that “Hines is so deaf that he cannot hear a cannon cracker go off under his nose.”

Hines popped up in the news quite a bit back then.

In December 1884, Hines makes news when he attempts to win $100 by catching a baseball dropped from 585 feet up the Washington Monument. He later reports that he missed three chances that day, and that the new white baseballs they used were hard to see against the white of the monument. He got a hand on just one of the balls, which brushed against his bare fingers. It was moving so hard and fast it left a dent when it hit the frozen ground.

In 1890, Ella Black, baseball’s first female baseball reporter, writes that Hines causes a sensation when he takes the field “in a shirt that fit him like a kid glove. … and his appearance in that shirt would have brought a blush to the face of many a fair maid.”

When, in 1888, he becomes one of the first players to wear sunglasses while fielding – “smoked glasses,” Sporting Life called them – it makes the news.

When he shows off a new ear trumpet that doubles as a walking cane, it makes the news.

When he starts playing cricket for fun, it makes the news.

When his father’s home in Washington, DC is robbed, it makes the news.

Hines even shows up on other player’s trading cards … 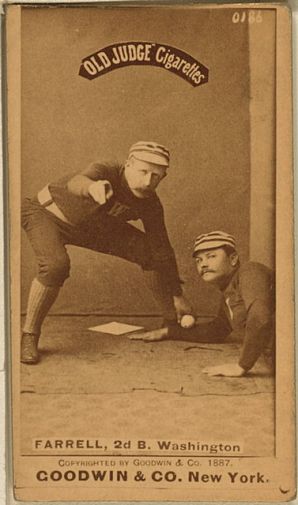 That’s him on the right.

Which is to say, Paul Hines was a celebrity.

After baseball he settled in DC, working in the Department of Agriculture mailroom, eventually rising to become its postmaster.

It was a sting at 9th and New York Avenue, NW in Washington, and Hines nicked the pocketbook of a female police officer.

He had been under surveillance for some time, The Washington Evening Star reported. After his arrest, police searched his home and found “a number of purses and pocketbooks … as well as twenty-five pairs of eyeglasses and spectacles.”

I am not a pickpocket, but I may have about 25 pairs of cheap drugstore reading glasses lying around the house.

The Evening Star continued: “Hines is the last man in Washington the police wanted to arrest on such a charge. His record is known to many of them and he has many firm friends in the department who did not desert him yesterday in his extremity. His reputation has always been of the highest and Inspector Clifford L. Grant, in charge of the detective bureau, said he was inclined to regard the alleged activities of the man as a kleptomania attendant upon advancing years.”

“I have played my last game and lost,” Hines is reported to have told the arresting officers.

Hines was released on $1,000 bond, but I can’t find any report of a trial. If he had been sent to jail, it certainly would have made the news. Maybe Inspector Grant just let it drop.

But, baseball fans didn’t. I think it was this last sad story that becomes the turning point. After that, Hines becomes suspect. His accomplishments are increasingly questioned. He is never seriously considered for the Baseball Hall of Fame. He becomes just a blurry footnote in a story that always ends with “he was arrested as a pickpocket in 1922.”

And, I feel bad about that. I mean, stealing is stealing, but even the DC police seemed a little sad about the whole thing.

As soon as I get home in the evening, I feed the three cats. They are still my top priority.

As nighttime comes, things start back to blurriness. Some of the passing day will turn to memory, but most of the day … like most days … will disappear forever. 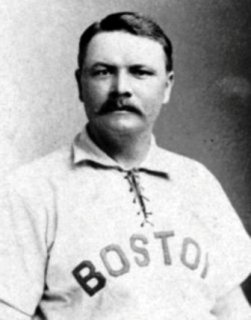 Paul Hines was born in 1855 in Virginia, 15 miles from Washington, DC.

Those who saw him play* said he was “the most colorful and sensational player in the league.” He ran like a “gazelle,” could “catch more flies than all the others put together,” and “was the most graceful batter who ever stepped to the plate.”

“There are but few men in ball business who can look back over their record on the diamond with more pride than Paul Hines.”

And, he made the first unassisted triple play in baseball history.

But, wait! There’s one more story about Paul Hines I think you should know. Read Part 2 here.