Pearce Chiles, an infielder/third base coach for the Philadelphia Phillies, was born in 1867 in Deepwater, Missouri. I think it’s fair to say he was an all-around no-goodnik – although thieving miscreant is probably more accurate. Phillies’ backup catcher Morgan Murphy, fellow no-goodnik, devised a system where Murphy, using binoculars, would stand beyond centerfield and steal the signs from the other team’s catcher. Murphy would forward the signs via a telegraph wire buried under the field and connected to a buzzer in the third base coaching box where Chiles stood. The buzzer would vibrate under Chiles’ foot, and he would signal to the batter what pitch was coming.  It was 1900. 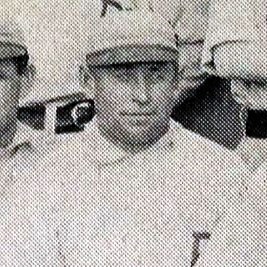 Chiles never spoke publically about the scheme … but if he had …

Those idiots think the DTs ‘smaking my leg twitch.

I hold my likker better ‘n any of ‘em.

I can stand out here all day in this goddam third base box. And, see, we paid a guy to lay down a wire and it’s buried right here where my right foot stands. I have to stand just so. But, if I do, Murph’ out there just beyond that centerfield point, puts his spyglasses on the other guys’ catcher, and from out there he pushes a button and presto – I get a jolt of pure electricity right through the wire, right to my damn foot.

Curve ball? Fast ball? Murph’s a catcher, he knows all the signs. I know from the buzz he sends me exactly what that pitcher’s gonna throw next.

One buzz, fastball. Two buzzes, something else.

Can you beat that?

Murph’ sees the sign, I get a buzz. It ain’t a friendly jolt, either, I’ll tell you that. I gotta rub my leg down with alcohol just to get the shaking out after a game.

But, it tells me what pitch is coming. I gotta act fast, but if a man over there at bat is paying attention, I can give him the sign and he’ll know right then what’s coming.

I only got a second, but I can do it. 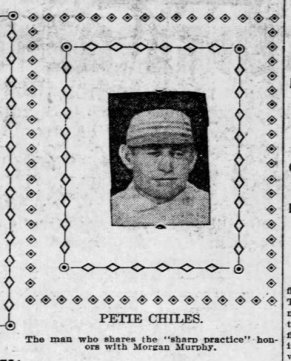 Some day you come out when there’s nothing else going on. Tell ‘em I said it was ok. You give me one dollar and I’ll let you step on it so you can feel the buzz for yourself. It ain’t nice at first, you gotta get used to it. Feels like you’ve got 10,000 lightning bugs crawling up your leg. But, it does the trick.

You gotta feel it to believe it.

You ain’t got a dollar? Are you kidding me? What do ya got? Fifty cents? I’m eating steak these days, brother, with all the trimmings, at the finest restaurants. My days eating at cheap chop houses are long over. I shouldn’t even be wasting my time talking to you if all you got is 50 cents. Let me think about it. 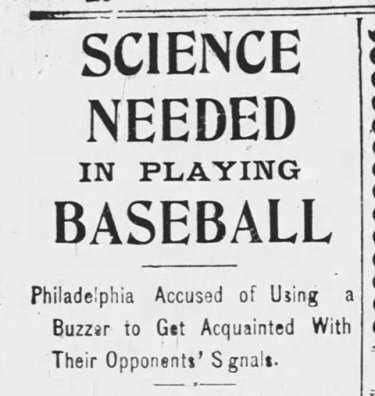 Ain’t science great? Who needs to bang a bat on a can when I’ve got this smart box that will buzz my leg and tell me exactly what pitch is coming? I can transfer that signal to the batter, exactly, in no time flat.

Electricity, my friend. Electricity is going to change everything.

Bang a bat on a can? What are you, a child? This is 1900. Maybe in your schoolyard that’s how you work it, but this is the big leagues, brother, and we got a wire and a buzzer and, I tell you, it’s going to take us to the top. 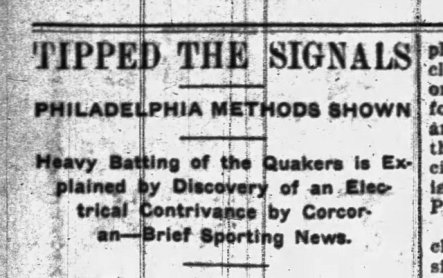 We used to whistle. Murph’ out there would fix his expensive spyeyes, glasses, whatever you call ‘em, on the catcher and figger out what was coming. He’d wave on down to us and someone would whistle to the batter. It worked at first, but it wasn’t foolproof. It was easy to miss Murph’ out there waving his hands. It took too long. And, whistlin’ and bangin’ can get drowned out.

But this. This is the future.

It ain’t stealing. Anyone can see the signs they’re making. We’re just transmittin’ what we see in an electrolical way. That’s it. Transmitting.

Ain’t no law against that.

If I get a jolt, I make a sign and if that guy over there sees it, it can change his game for the better. That’s worth more’n a few bucks to him. To all of us.

It’ll take us to the top.

Me? I’m just the transmitter.

Yeh, baseball’s gonna remember me. I’m sure of it.

Chile’s jittery leg found him out. On September 20, 1900, the suspicious Cincinnati Reds dug up the buzzer buried in the coaching box. (The next day Chiles, as a joke, buried a non-working buzzer in the first base coaching box, which the Reds also eventually dug up. You gotta admit, that’s sort of funny.) 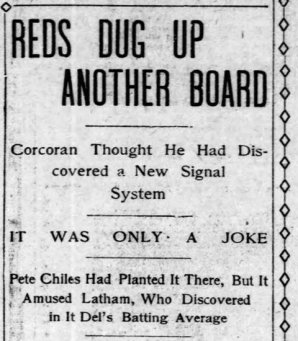 After several more sign-stealing scandals, Major League Baseball officially banned the use of technology and mechanical methods for stealing signs. In 1962. Sixty-two years after Chiles and Morgan were caught with their buzzer.

Pearce Chiles was released at the end of the season 1900 season. He was later arrested in Texas for robbing a veteran. He escaped from jail and, best any one can tell, changed his name and played again, folks think, in some California leagues. He died, in California, in 1933. He was 66.

Baseball doesn’t remember him much. Except when teams get caught stealing signs.

10 thoughts on “If Pearce Chiles Could Talk …”