Because you can write incredibly wild, yet basically true, things like this:

“I ain’t got any education, but nobody can teach me how to play ball.” ~ Dickey Pearce

Born in Brooklyn, he started his professional baseball career there when he was just 5 years old.

While I seem to be spending an inordinate part of this month writing about short and stocky players, it is, I think, important to note that Dickey Pearce was 5’3-1/2” (when you’re 5’3” that last half inch is pretty important) and weighed in at 161 pounds.

While 5’3-1/2″ and 161 pounds may sound chubby to you, clearly, those old-time baseball unis were downright slimming. (Pearce is the one in back.)

Pearce, who played in the earliest days of major league baseball – from the 1850s into the 1880s – is credited with turning the roving “short field” position into the more territorial shortstop position that we know today, and, in doing so, may have invented, or developed, or, at very least refined, the double play. 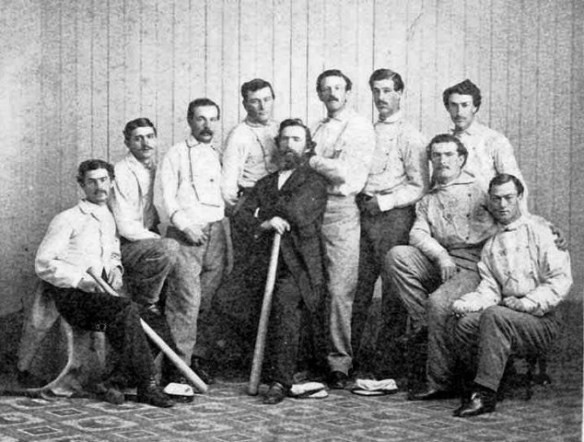 The Atlantic Base Ball Club of Brooklyn, 1865. Pearce is the third from the left.

Pearce’s double plays included intentionally dropping routine fly balls, allowing for easy outs as the runners on base hesitated while waiting to tag up. He is why we have the infield fly rule today.

Dickey Pearce also invented the bunt, so, I guess you could say he was sort of the Thomas Edison of early baseball.

That a man born on a once-every-four-years Leap Year also invented the nowadays similarly rare bunt is what makes baseball such a perfect reflection of the world at large. 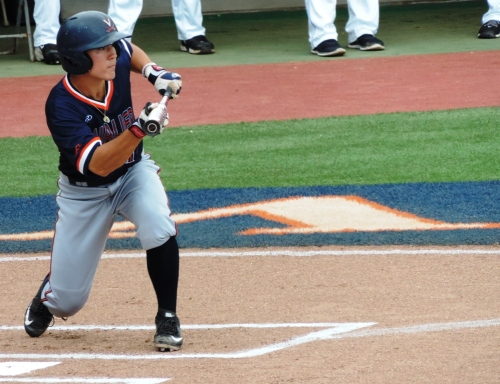 (While Dickey Pearce is not the only professional ballplayer to be born on a February 29, he is the only one who invented the bunt, so as far I’m concerned, he’s the only one that needs mentioning today.)

In 1918, the New York Tribune shared an early quote from Pearce explaining his creation of the bunt in 1866:

“There are a lot of suckers who want to knock the ball loose from its trench coat every time they come to bat. This results in the infield playing back and the outfielders being so far away that they are practically commuters. Now, the only way to beat this frame-up is to dump the ball in front of the plate. It will surprise the infielders so greatly they will promptly drop dead, along with the catcher and pitcher, and while the outfielders are running in to fall on the ball, I will reach first base.”

Dickey Pearce is also said to have originated the “fair-foul” chop, batting the ball down hard into the infield dirt so it would ricochet deep into foul territory. Today, this play would be foul, but back then it was a fair ball and would catch infielders off guard. Pearce could often use it to leg out a single.

Pearce stretched out his baseball career with seasons in the minor leagues – playing and managing – as well as time umpiring (rather poorly), and, finally, serving as a groundskeeper at the Polo Grounds until around 1898.

Afterward, he and his family moved to a small town in Massachusetts where he worked in a low-wage position in a local sugar mill.

In 1908, he attended a reunion of old ballplayers at Paddock’s Island in Boston Harbor.

As the Brooklyn Times Union recounted in 1911:

“On that occasion he took a turn at bat just to show that he hadn’t forgotten the game, got overheated, caught cold, and was too old to withstand the siege.”

Pearce died of complications from pneumonia on September 18, 1908.

Photo by Toni Cuenca on Pexels.com

Since I won’t get another chance for four years, here’s one more Leap Year nugget that’s too good to save …

In Leap Year 1928, Harry Craddock of the Savoy Hotel in London introduced the Leap Year cocktail. The Savoy Hotel’s cocktail book, published in 1930, noted: “It is said to have been responsible for more proposals than any other cocktail ever mixed.”

Whether you’re in the market for a proposal or not … here’s how to make the 1928 Leap Year Cocktail:

Shake, strain, and garnish with a lemon twist.