In early 1891, second baseman Clarence Childs signed a $2,300 contract with the Baltimore Orioles, about $65,000 in today’s dollars. Upon signing he was immediately paid a $200 advance. He then abandoned the team, saying that the Orioles had deceived him and he could find a better deal elsewhere. The Orioles sued. They lost. And, Childs joined the Cleveland Spiders.

(Months later, the Orioles were still in court trying to get their $200 back. It’s unclear if they ever did.)

Childs jilted the Orioles. Probably wasn’t the first to do it. Definitely not the last. (See: Mark Teixeira, 21st-century Orioles jilter.)

What if I told you Clarence Childs wasn’t always called Clarence? What if someone along the way nicknamed him Cupid? Cupid Childs?

Courtesy of Peak99, via Creative Commons

Well, friends, this Valentine’s Day post is practically writing itself.

Childs was a Maryland native, born in Calvert County in 1867.

He was, pretty much from the start, undersized and overweight. And, as Babe Ruth, Bartolo Colon, and others would later discover, reporters can be merciless when it comes to a ballplayer’s weight.

That “Cupid” was the nickname that ultimately stuck is actually a kindness. Reporters also called him “Dumpling,” “Fatso,” and “Fatty,” although his friends in Maryland called him “Paca.” Reports of the day listed him at 5’8” and 185 pounds.

Not to belabor the weight thing, but … does this seem especially fat to you?

Cupid Childs thrived in his eight seasons with the Cleveland Spiders – and later in seasons with St. Louis and Chicago – becoming one of the era’s best second baseman and one of its biggest stars.

“[H]e is about as wide as he is long. … yet there are few men in the league who can get over the ground faster than the ‘dumpling,’” one reporter explained early in Childs’ career.

Sure, he seems a bit short and maybe you can see a little belly there, but … seriously … Fatty?  Fatso?

As sportswriter Fuzzy Woodruff recalled in The Sporting News in 1912:

“Childs was a little, fat man with a face as red as any bull teaser could have desired. … But Childs’ fat was deceiving. There was a lot of strength in his lumpy form. He could move as fast as the most sinuous athlete and knew more about infield play probably than any man …”

“To add to his grotesque appearance, Cupid invariably streaked his face with mud before taking his position in the infield and it is said that he was the originator of using lampblack under the eyes to keep off the glare of the sun.”

As Childs’ SABR bio notes: “Childs’ lifetime major league on-base percentage of .416 is higher than every second baseman in the Hall of Fame except Rogers Hornsby and Eddie Collins. His .306 lifetime batting average is higher than 12 of the second basemen who have already been inducted into the Hall.”

“He was a hit from the start, remarkably fast on grounders and flies, despite his fat shape and short limbs, while his batting was tremendous.” ~ The Minneapolis Tribune, 1901

For whatever reason, Childs is not in the Baseball Hall of Fame and is probably one of those pre-modern era players who will forever be “on the bubble.” 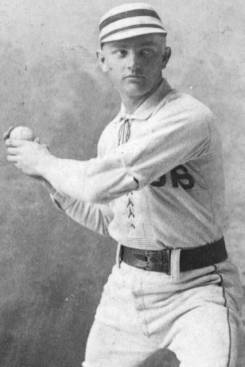 In 1892, Charles “Silver King” Koenig, a pitcher with St. Louis said that trying to pitch to “lilliputian” Childs was like “aiming at a six-inch space on a target at 40 paces.”

(I share this tidbit a) to give you a pitcher’s perspective on pitching to Childs, and b) to ask: which would you prefer – reporters calling you Cupid, Dumpling, and Fatty, or Silver King?)

Because baseball stories have a way of meandering back around, the Baltimore Orioles signed Childs again in 1903. He played well through the Orioles’ spring training and the first six games of the season. 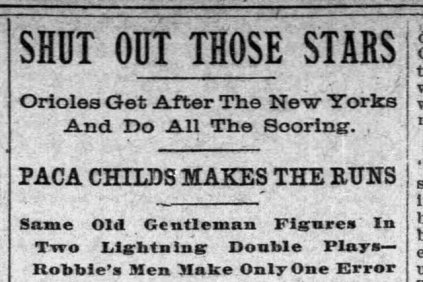 That’s when a Montgomery, Alabama team in the Southern Association caught wind of the deal and argued that, in fact, Childs had previously signed with them. The Orioles lost Childs again.

Seriously? We’re back to “Fatty”?

I suppose you could say that the Orioles loved and lost Cupid … twice.

Childs stayed in baseball, as a player and later a manager into his 40s, spending off seasons in Baltimore – in a home about a mile from where Camden Yards is today – where he dabbled in real estate, operated a saloon, and eventually bought a coal business, which failed in part, friends said, because he was so generous in giving coal away in the city’s poorest neighborhoods. Suffering from Bright’s disease, a kidney disorder, and cirrhosis of the liver, he died in 1912. He was 45.

But, Valentine’s Day isn’t for mourning. It’s a day to show love and affection to family and friends.

So, let me leave you with this …

On May 26, 1892, the Cleveland Spiders, with their star second baseman Cupid Childs in tow, were in town to play the Baltimore Orioles, the team and town that Childs had jilted just one season earlier.

The Spiders, with Childs as their lead-off batter, easily swept the three-game series from the Orioles.

During the first game of that series, Baltimore’s local Garrison Pleasure Club, of which Childs was a member, turned out to cheer on their favorite Cupid.

Sixty members took part, riding to the game in a “big omnibus drawn by eight horses.” When Childs came to bat in the first inning, the group interrupted the game to present him with a gold-headed cane. That night, the club held a party in honor of Childs, who was joined by his Cleveland teammates. Supper was served, songs were sung, a piano was played, and, a good time was had by all. 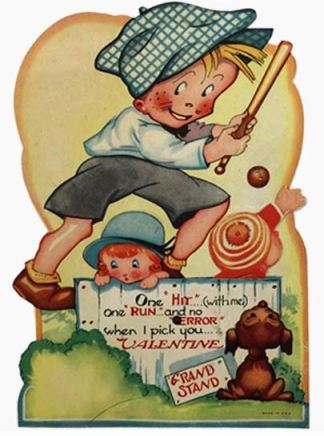 19 thoughts on “The Cupid Of Second Base”