There are few things as wonderful as an egg salad sandwich on a summer Friday when you’re not working and everyone else is.

Today is, I thought, one of those “salad days.”

Because, as with many turns of phrases, I am using “salad days” incorrectly.

(I will occasionally say someone is “over the moon” when they are very, very angry, and I once advised a new mother not to “throw the baby out with the bathwater” which I thought was darned good advice.)

And, so I thought “salad days” simply meant good days.

Like seeing an Orioles walk-off home run against the Oakland A’s last Saturday … or, that whole egg salad sandwich thing. 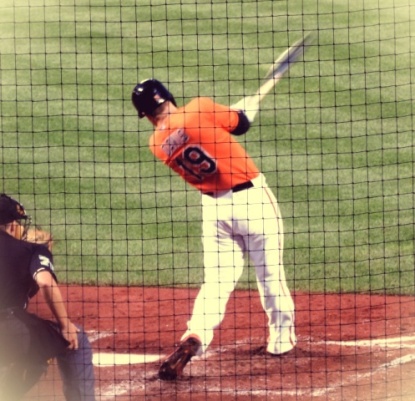 Turns out, these are not salad days after all.

Salad days are the frivolities of our youth.

So, today’s egg salad sandwich? Not a “salad day.”

But, maybe Baltimore’s four wins against the Oakland A’s last weekend – outscoring them 34-13 – were salad days after all.

Because, for a brief moment we O’s fans believed we had the post-season in the bag.

Such carefree, naïve fans were we.

(Although a little credit here. Our salad days did include a win over Sonny Gray.)

But, not all teams are reeling and you can’t play Oakland every day.

In fact, the O’s have pretty much seen the last of the reelers this season. And, today, they’re a half-game back for the second Wild Card.

Look how happy we were! 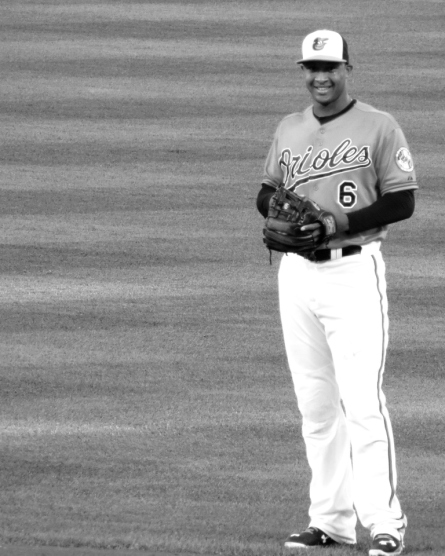 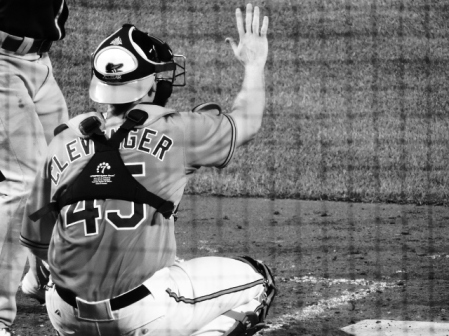 Raise Your Hand If You Want To Go To The World Series. Steve Clevenger. Catcher.

And, Gerardo Parra, too!

Parra, the new O’s outfielder, is doing the Wave with the fans!

I know. I didn’t believe it either. That’s why I watched him do it two more times when the Wave came through the outfield bleachers. And, he did it each time.

I love Mr. Parra. Can we keep him?

And, what are salad days without pie? Meaningless.

You know that egg salad? It wasn’t so great. First, the bread was sliced top to bottom, not on a diagonal, as perfect sandwiches are. And, it’s kind of made my stomach funny. Also, no pickle. What’s up with that? Although it was wrapped in deli paper, which is always a nice touch.

Sure, they’ve only won one game since Oakland left town. Sure, there are some awfully good, surging teams that they will need to elbow out of the way to get into the post-season.

But, you know what they say – it ain’t over ‘til the fat lady sings.

Baseball’s July 31 trade deadline – Trade! Sell! Abandon Hope! – turns a perfect pastoral game into the dirtiest place in town. It’s the bathroom in a sketchy dive at closing time. (Step carefully, touch nothing, hold your breath as long as you can.)

And, so the Detroit Tigers, Milwaukee Brewers, Philadelphia Phillies, … have I left anyone out? … Atlanta Braves, Cincinnati Reds, Oakland A’s, and I can’t remember who else, sold or traded whomever they could, conceding the season, resigned to slide through the last 540 innings of summer as quickly and meaninglessly as possible.

Did your team just bleed out? Well, you’ll always have April, won’t you?

Hot teams feast on the bones of others, like vultures. But, vultures are pretty cool and, if you got to know them, you would find them sociable creatures who are simply recycling carcasses and protecting us from plague and terrible diseases.

General Managers are not vultures in the “pretty cool” sense.

They are cut-throat, not sociable at all. They move pitchers, swap batters, dump salaries, and make blockbuster deals like I change stations on the car radio (which is to say often and with little care).

And, I smile wistfully, remembering the three heavenly months last summer with Andrew “Spaghetti Legs” Miller, the remarkable, shut’em down reliever, whom the Orioles greedily gathered up from the Red Sox, giving Boston in return a hot minor leaguer, who now is the Red Sox future, while Miller is now a Yankee.

Miller was a “rental.” By season’s end he was a free agent and the Yankees – of course, the Yankees – dangled pinstripes and bags filled with guilders, beads, and trinkets, and, just like that, Spaghetti Legs was gone.

But, not before he helped the O’s to the ALCS, which was amazing.

Sure, players expect to be jostled and juggled, wondering where they are going next.

Baseball has always done this. They sold and traded Babe Ruth, after all. Twice.

(Pitcher Octavio Dotel played for 13 teams during his 15-season career (1999-2013), making him the most travelled teammate in baseball’s modern era. Chances are he played for you.)

And, I like free agency that allows players to negotiate for their share of the millions that owners amass from their luxury boxes and $26 hot dogs.

“These are human beings, not pieces of meat. Really bothers me when I hear, ‘Are you buyers or sellers?’ Don’t use that around me. These are human beings that I am close with and I don’t look at them that way. I know it’s the reality of the business, but it’s not like we’re moving around slabs of bacon here. And I like bacon.” ~ Buck Showalter, Orioles Manager

I don’t like all the trading and moving people about like cattle at a stockyard, because it seems uncivilized and cruel – if making a few million dollars and moving from one comfy clubhouse to another can be deemed cruel.

Orioles reliever Tommy Hunter was traded to the Chicago Cubs on Friday one minute before the 4:00 p.m. trade deadline.

Everyone thought it might happen. Baltimore’s bullpen is crowded, they need outfielders, and Tommy’s a free agent who’s having a not-bad season.

Tommy was gracious in his goodbyes.

Bmore! Ive enjoyed every part of the last 4 years! My wife & I have called it home & will miss the city, my teammates, & the fans! @Orioles

But, here’s the thing.

The Hunter trade was leaked to reporters who promptly leaked it to Twitter, where I saw it scroll by on my feed at 3:59 p.m. … at the same time that … Tommy Hunter learned of his own trade through the same tweet.

It seems a bit ugly and thoughtless. I don’t want to find out I’ve got a new job because my boss told a tweeter – and the rest of the world – before he told me.

And, Tommy’s not the only one.

On Wednesday night in the middle of a game, Mets shortstop Wilmer Flores learned he was being traded when fans in the stands who had seen Twitter rumors told him. He cried.

And, it broke my heart just a little.

Surreal scene. Mets trade Wilmer Flores but leave him in game. Flores then cries on field while playing. pic.twitter.com/0CDpjGpwpS

That trade fell apart, which was just as well for the Mets since Flores hit a walk-off homerun for them on Friday night.

Good can come from trades. Some players now have post-season hopes – hopes they didn’t have a week ago. Some players find a change of scenery the spark they need.

I just wish it didn’t seem so callous. So, cruel. So, business-like.

Goodbye Tommy Hunter. Goodbye Bud Norris. Thanks for the fastballs.

And, hello new Orioles outfielder Gerardo Parra. The O’s scooped you up from the Brewer’s fire sale.

Your first at-bat as an Oriole on Saturday night was a double.

It was a thing of beauty.

You may be a rental, but, like every teenage summer fling, we love you like crazy right now.