Editor/Husband thinks it’s important to tell you, before you go any further, that I had a migraine. He thinks this is the headache – and the headache sleep – talking. (Maybe. Maybe he’s right.) 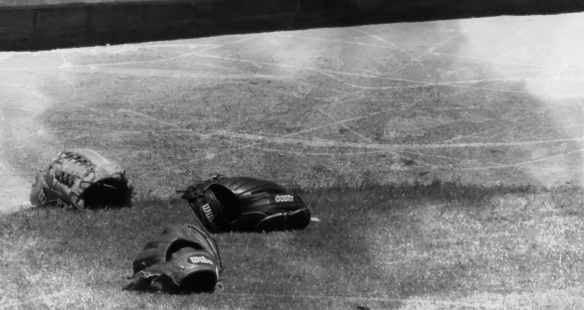 A line of trees curved around the outfield. Trees where the fence would be. Should be. But, this outfield was lined only with trees.

And, some were smoking. And, some hadn’t shaved. And, each one held a rolled-up newspaper that he beat in rhythm – along with the others – against the branches, rattling the leaves. They all seemed angry. Or, maybe they were just irritated that nothing had happened yet in a game that had yet to start.

And, there was an umpire explaining the ground rules. Explaining them to me, perhaps, but mostly to the players.

Explaining why the third base line that ran in from left field, was not a line but a crick of running water. But, not quite a crick, exactly, but something narrower than that. What would you call it? Would you call it a rill? OK, that’s what it was. A rill. And, the water in the rill bubbled and ran from the left field line, cut through third base, and flowed to home, and continued past home, extending into a wide field well behind where the game would be played and out of sight.