The True Part: This wheelbarrow sits in the middle of a nearby farmyard. I pass it every time I drive or walk down our road. It’s been there for years, through at least the last two families who have lived there. I don’t know how it got there or why it stays there. But, it got me thinking  …

He could tell you the exact moment when he knew his playing days were through.

It happened toward the end of a meaningless game on a humid Wednesday at the end of September. He was at bat, a 3-0 count, when Swelter Feeney’s fastball caromed off his wrist. Feeney hit batters all the time, so it didn’t surprise him. If he had jerked away a second sooner, maybe it wouldn’t have hit him square on the bones. But, he hadn’t, and it did. He knew right away it was bad. He knew right away things had changed.

He jogged to first and fought back a grimace. Bones were broken – at least one, probably more – in his wrist. He was sure of that. Teams didn’t have trainers back then and he didn’t need a doctor to tell him his hand would never be the same.

He bluffed his way through the rest of the game – a game they lost – hiding the fast-swelling hand from prying eyes. Didn’t say a word. He didn’t want to lose his job, the only job he ever wanted.

That night he ate nearly an entire bottle of aspirin and tied an old rag around the wrist to quiet the throbbing. He found a pair of old tin snips and, with his good hand, cut a circle out of a pie pan and pushed a thin piece of tin into his glove, loosening the leather laces and splitting part of the glove at the bottom so he could press his swollen hand behind the tin, which, he hoped, would soften the blow of ball into glove. It helped. But, only a little. END_OF_DOCUMENT_TOKEN_TO_BE_REPLACED

This may be the slowest serial ever. If you don’t remember Chapter One – which was months ago – you’ll find it here. 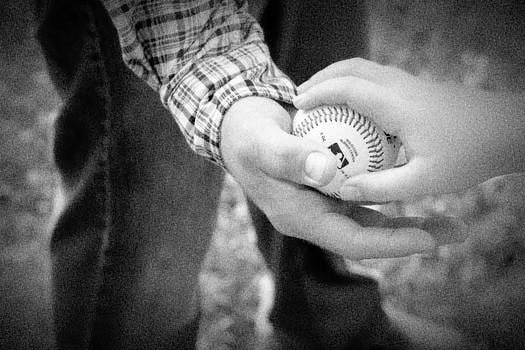 Photo by Michael Morse on Pexels.com

There is no such thing as an uncomplicated ballplayer.

He wasn’t sure how long it’d been. How long since his brain would flicker as he tried to recall a word, a name, a something else.

“Normal aging,” the doc said. “Nothing to worry about.” But that was years ago – 10, maybe more. It was just annoying then. A lost name here or there. It was more than that now.

He would be talking to someone he knew. Someone he knew he knew and suddenly his mind would go numb – the person would keep talking but he wouldn’t catch a word. Instead, he’d be consumed by the realization that he no longer knew the person’s name.

The name he knew he knew.

He would start through the alphabet, like thumbing the pages of an old phone book.

Danny? Is it Danny?

The name would usually come to him. But, not always. It made him wonder – is this how it ends, everything just goes blank?

His hands trembled a little now, too. And, when they did he would lace and squeeze his fingers together or hold his wrist tight with his other hand, or rub his palms as though washing them with air. Little things that no one would notice and that would slow the tremors that came more often now.

Maybe it was because Peach was a little girl, so when she stood next to her grandfather her eyes were closer to his hands than to his eyes. Or, maybe it was because she wasn’t trying not to notice, which was what her mother and the others would do.

They’d pretend not to see, but Peach didn’t.

He paused for a moment just to make sure. Pam, Patti, Polly, Penny …

She smiled, turned, and ran up the stairs. She clattered around and quickly ran back down. She was holding her grandfather’s baseball glove – now her glove – with a ball shoved into its worn pocket. END_OF_DOCUMENT_TOKEN_TO_BE_REPLACED

Things are different in 2020. They will only get different’er …

Smelly was small enough that he could turn himself sideways and wedge his shoulder between two of the gate’s metal bars. This allowed him to push his cheek so hard into one metal bar that his ear was almost – almost – inside the park.

This was how Smelly, the little neighborhood kid, listened to baseball.

But, Smelly had the runniest nose in the neighborhood. He was constantly sniffling and snorting and wiping snot into the elbow of his shirt sleeves.

One day, on one of Smelly’s particularly snorty-snotty-runny-nose days, a no-good kid from another block said to him, “You’re a disgusting snothead.”

“I’m not a snothead,” Smelly replied. “I am smelling.” And, he took a long and deep and wet snotty-snorty inhale in the other kid’s direction. “And, I smell you.  And, you stink.”

From that point on, he became Smelly, which was, everyone agreed, a much better name than Snothead.

Smelly would always show up at Baltimore’s Camden Union ballpark on game day early. It was just six blocks away from Smelly’s house, he could run it in five minutes. (Unless he stopped for a bomb pop, which was worth the detour.)

Daytime games saved the teams money; no need to turn on expensive lights. The game would be broadcast at night or whenever someone called it up on their “HV” Home Viewer. There were no announcers, just trails of information running continually at the bottom of the screen. No one cared that the games weren’t aired live. It didn’t matter.

It mattered to Smelly. END_OF_DOCUMENT_TOKEN_TO_BE_REPLACED

(Here’s a Thanksgiving story for you … )

I told him not to, but Andy brought out that damn baseball again and set it on the table before dinner.

He did it while I was in the kitchen trying to keep the turkey from drying out. (You have to tell me again … I brined it for days. I set an alarm and basted it every 15 minutes when it was in the oven, just like you said. My hand is numb from all the basting. That’s not permanent, is it?)

Andy was threatening to deep fry again. He’s going to set the neighborhood on fire with that turkey deep fryer. So, I went out to the garage covered it in dish soap and the kids’ school paste last week. (Thanks for the idea.) I blamed the neighbor kids. Halloween prank, I said. It saved Thanksgiving, but he’ll have it cleaned up before Christmas unless I figure out how to make it disappear for good.

I told Andy this year we needed a peaceful Thanksgiving. Leave the baseball alone. The thing is disgusting – it smells of dead mouse. (If we all die of the plague, you’ll know why.)

I can’t even grab the ball off the table because my hand is still numb from all the turkey basting. (Not permanent, right?)

It’s too late, anyway. There’s the knock at the door.

The knock that comes as soon as the Thanksgiving meal is set out. As soon as the turkey is carved, the potatoes mashed, and the Tofurkey is on a plate for Lily, who has suddenly decided she’s going vegan this year.

“Don’t answer it.” I say that every year. I might as well be talking to the cat. Lily and Sam hear the knock,  sit up straight, eyes lighting up. Sam yells, “YESSSS!” and Andy smiles because he thinks he’s raised them right.

Right enough to know you always answer the door on Thanksgiving when the baseball that smells like a dead mouse is sitting on the Thanksgiving table.

Even when I say, “Don’t answer it.” Because we all know who it is.

Who’s going to believe that Babe Ruth comes to our house every Thanksgiving, when he’s been dead for 70 years? END_OF_DOCUMENT_TOKEN_TO_BE_REPLACED

Friday night, for the fourth time out of the past six games, Virginia baseball was interrupted, delayed, or postponed by rain and storms. With nothing else to do, this got me to thinking about the future …

There came a time when the doomsayers were proven right.

The weather had changed.

The rain now came in floods instead of showers, the storms were stronger and more frequent. Outside was not bucolic; outside was a battle, something to conquer as you went from one indoor space to the next. It was too wet or too dry. Too hot or too cold. Too much. Always just too much. END_OF_DOCUMENT_TOKEN_TO_BE_REPLACED

Editor/Husband thinks it’s important to tell you, before you go any further, that I had a migraine. He thinks this is the headache – and the headache sleep – talking. (Maybe. Maybe he’s right.)

A line of trees curved around the outfield. Trees where the fence would be. Should be. But, this outfield was lined only with trees.

And, some were smoking. And, some hadn’t shaved. And, each one held a rolled-up newspaper that he beat in rhythm – along with the others – against the branches, rattling the leaves. They all seemed angry. Or, maybe they were just irritated that nothing had happened yet in a game that had yet to start.

And, there was an umpire explaining the ground rules. Explaining them to me, perhaps, but mostly to the players.

Explaining why the third base line that ran in from left field, was not a line but a crick of running water. But, not quite a crick, exactly, but something narrower than that. What would you call it? Would you call it a rill? OK, that’s what it was. A rill. And, the water in the rill bubbled and ran from the left field line, cut through third base, and flowed to home, and continued past home, extending into a wide field well behind where the game would be played and out of sight.