“I love baseball. You know, it doesn’t have to mean anything. It’s just very beautiful to watch.” ~ Leonard Zelig, from the movie Zelig *

When baseball is a game, it is good. It is beautiful.

The grass is green, the sun is warm. Just a game. A beautiful, simple, splendid game.

But, when it’s the off-season, baseball stinks. Players are tucked away and resting up (some are playing golf, some are signing multi-multi-multi-million-dollar deals).

They become a commodity. This one gets traded. This one gets bought. This one is left on the shelf like a sad, dusty bottle of Justin Beiber cologne just hoping someone needs a desperation gift on Christmas Eve.

It sort of makes me uncomfortable when humans are treated like products. (I know, that’s the point of business, right? I’m awful at business.)

The off-season is like a soggy wad of hairball trapped in my throat.  (Editor/Husband does not believe that I can know what a hairball feels like, but I’ve seen my cats get all buggy-eyed, rear back, and start to vomit. I’m pretty sure I feel the same way right now.)

I hate the off-season.

The Baltimore Orioles traded away Jim Johnson, their closer, to Oakland, even though I specifically asked them not to. 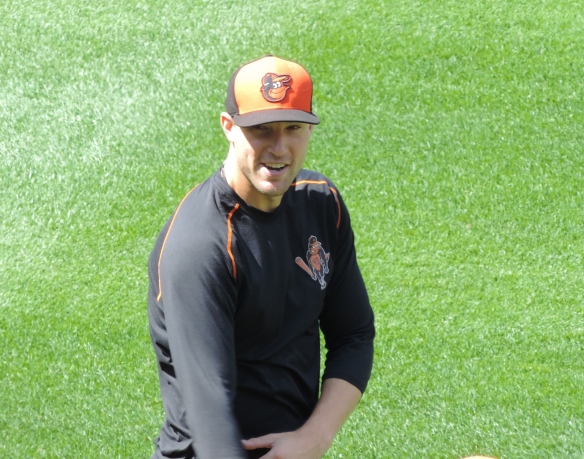 I’m a big Jim Johnson fan. I’m a fan of bullpens and relievers in general. I’m still pretty steamed over this.

(And, yes, I’m looking forward to the “I told you so” blog post that I’ll write next season when Jim has a great year in Oakland. And, I hope Oakland will fix its sewage-in-the-dugout thing before Jim gets there. Dear Oakland, he’s used to nicer accommodations.)

The Orioles let their Left Fielder Nate McLouth go to the Washington Nationals.

Yeh, I’m kinda sore about this, too.

But, they got a new left fielder guy. A guy from the Royals. So maybe I’ll write about him next season.

The Orioles then were about to sign a new guy to be their closer.

Yay, it’s Christmas! We have a new closer under our Christmas Tree!

Grant Balfour, oddly enough, was Oakland’s closer last season. We were ready to sign him last week. Then something went wonky during his physical (which often happens when you’re a I-can-see-the-hill-but-I’m-not-quite-over-it 36-year-old pitcher with a shoulder that’s been knitted back together with pins and needles) and the Orioles pulled the deal.

And, then began the kerfuffle.

Orioles: We are not happy with the results of the physical and we are looking elsewhere.

Balfour: I am healthy.

Orioles: You are not.

Balfour: I am too.

This has been going on since Thursday.

I don’t like all the off-season shuffling and wheeling and dealing and trading and moving things around.

Now, I have nothing under my baseball Christmas tree.

But, Manny Machado’s knee is healing up. So, that’s a good thing.

And, that’s the news from baseball. I’ve been monitoring the baseball tweet-and-trade machine, so you don’t have to.

* Zelig is a wonderful movie. Woody Allen. 1983. You should watch it. (It has nothing to do with baseball. Really.)

6 thoughts on “Baseball’s Beautiful. But, The Off-Season Stinks.”