I wrote about the messy business of drug testing and cheating and Chris Davis here.

And, here’s the weird thing I just discovered.

I started this blog in 2012. That was the summer that Giants outfielder Melky Cabrera was suspended for using performance enhancing drugs (PEDs) and failing a drug test.

And, I wrote back then about Cabrera and the messy business of drug testing and cheating. (Which you can read here.)

In my post last week about Davis, I was conflicted. I don’t like cheaters, but hey, we all make mistakes and do stupid things from time to time, right?

Was I mad at Chris Davis? Disappointed? Could I ever trust him again?

The last words of that post on Friday … “I just don’t know.”

When I wrote about Melky Cabrera in 2012, I couldn’t decide either. Was I mad at him? Disappointed? Could I ever trust him again?

The last words of that post … “I just don’t know.”

That I ended both posts exactly the same way – unknowingly – means what? That I’m hopelessly conflicted? Unable to find the black-and-white answer in a gray-area world? Utterly predictable? Or, that I’m my only plagiarist?

Just like the strike zone, balks, the ever-changing rules about blocking the plate, the phantom “almost tags” at second on double plays … baseball might seem black and white on the outside, but inside the rules can get a bit mooshy.

To ban Adderall for some players, but allow it for others? I just don’t know. It doesn’t seem so black and white after all.

Yes, Chris Davis broke the rules. He admitted that. He’s serving his suspension.

But, as CBS Sports reports, Davis may be one of the few players who isn’t “faking” his ADD diagnosis. Read here.

And, there is this.

Yesterday, with no game to go to (because of that suspension thing) Davis was on his way to the airport to pick up some friends. He came across an accident on 295 outside of Baltimore, stopped, flagged down help, and helped right an overturned truck that had pinned one of its occupants.

He really did. (And, you can read about it here.)

So, he may have done a bad thing. But, he’s also does good things.

How can I stay mad at someone who helps out like that?

How can I stay mad when the Baltimore Orioles are one win away from clinching the American League East title?

No expert predicted it (except The Baseball Bloggess). And, it hasn’t been easy. 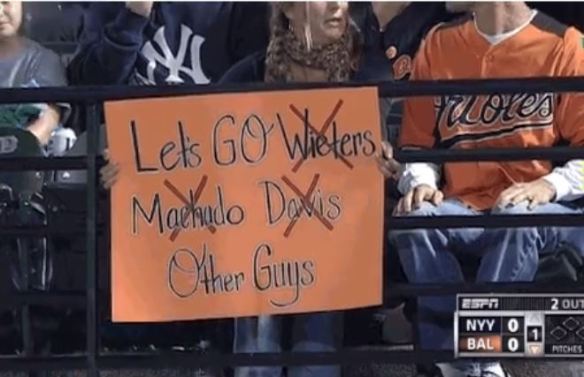 The Orioles are about to win the AL East title with the help of a bunch of non-All-Star Other Guys. How cool is that!

It’s been a long time, too. The last time the Orioles won their division was 1997.