Luke was at Camden Yards in Baltimore last night. He brought this sign. 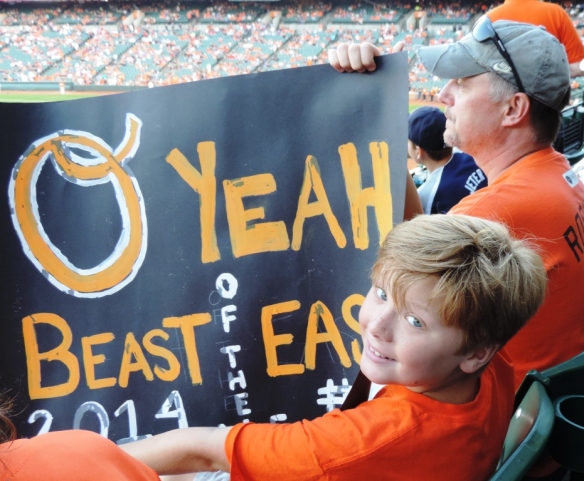 O Yeah! Luke & his Orioles Beast of the East sign.

Between every inning and half-inning, Luke stood up and held up his sign trying to get the attention of the camera people so that they would show his sign on the Jumbotron in Center Field.

Luke is awesome. He never faltered and he never lost hope.

Luke told me that his mother actually made the sign – not him. “I slept in,” he admitted.

This is another important quality for a true baseball fan: pacing. The understanding that night games can often run into the wee hours requires the ability to catch a few extra snooze minutes whenever possible.

The only thing that mattered was the game at hand.

Last season, Baltimore Style Magazine asked Machado if he was aware of the crowd when playing. He said:

“Totally. … [Y]ou can always feel the energy. You hear people in the background. It’s gotten really loud in Baltimore lately. I love it.”

It was loud last night.

Even when the Red Sox got off to a fast 2-0 start.

But, did Luke give up hope? What do you think?

Fan of the Game: Luke.