The experts picked you and experts don’t lie. That’s why they’re experts. (Expert is derived from the Latin word for “try.” All that trying has made them smart. So smart that the World Series is already decided and we can just move on to Christmas. “Dear Santa, Please help the Orioles win the World Series in 2016.”)

Yes, I mean you – all you smarty-pants with your fancy stats and box scores and hours of analysis and number crunching.

What the FIP is a wOBA?

Yet, despite all that hard work, the experts are almost always wrong.

Admit it. Giants over Royals in last year’s Series? You had no idea. NO idea.

No stats gazing for me. I’m too lazy for that. (I also hate math.)

Instead, I looked for a few folks around town who don’t care a bit about baseball. For them WAR is good for absolutely nothing and ERA is a laundry detergent.

They’ve got better things to do this summer than watch a team play 162 crummy games of baseball.

(For the record, I don’t have anything better to do.)

They picked the 2015 division winners. 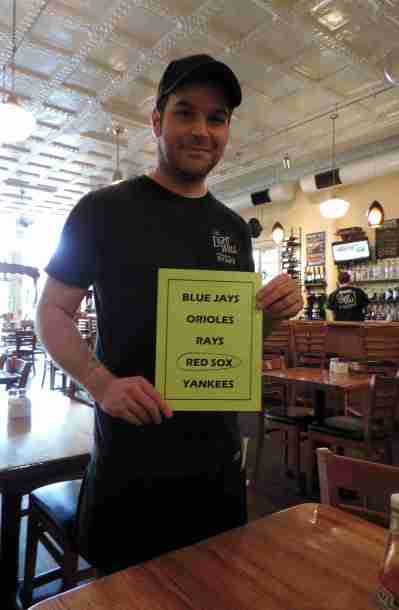 Andrew is a server at The Lightwell, one of our favorite go-to spots in Orange, Virginia. (Black bean burger with avocado, dee-lish. Also, very nice cheesy grits. I didn’t even know I liked cheesy grits.)

Why the Red Sox? “My mom is from Boston.”

Scout, a first grader, was hanging out with her family at the barber shop on Main Street.

Scout will watch her brother play baseball, but that’s about it. She prefers picking flowers, playing with her puppy, and riding horses.

Why the Tigers? Because I asked her to circle one of the teams and she circled Tigers. Good enough for me.

Gloria was born in Chicago. North side, so Cubs all the way. Her dad took her to Wrigley a few times when she was young. It was a long time ago, but she still remembers sitting in the right field bleachers.

She’ll watch the standings during the season just in case this becomes the year the Cubs win the World Series. She doesn’t want to miss that. (Aren’t Cubs fans cute?)

She also reads my blog.  “I liked it at first for the pictures of the cats, but I like it for the baseball history now.” See, what a nice person Gloria is?

Why the A’s? “They were on the middle of the page.” Gloria also noted that, logically, athletes should be better ballplayers than angels, astronauts, mariners, or rangers.

Sean is a local lawyer. (I told him I would assure you that he is a very good lawyer. He set up my business LLC and, look, I’m still up and running … so there you go.)

Why the Braves? “My cousin played for the Braves. He came in as a pinch hitter, struck out, and lost a World Series game.” 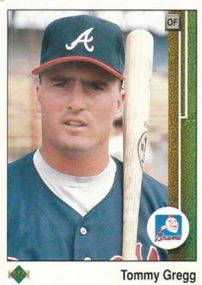 Sean’s cousin is Tommy Gregg, who played about 10 years in the majors, including six in Atlanta. In Game 2 of the 1991 Series versus the Twins, Gregg pinch-hit for Mark Lemke with two out in the bottom of the ninth, the tying run on first. He struck out looking. The Twins went on to win the Series, though you can’t blame Gregg’s one strikeout for that.

Gregg had a steady career, much better than that one strike out would have you believe, and he’s currently the hitting coach of the Omaha Storm Chasers, the Triple A affiliate of the Kansas City Royals. 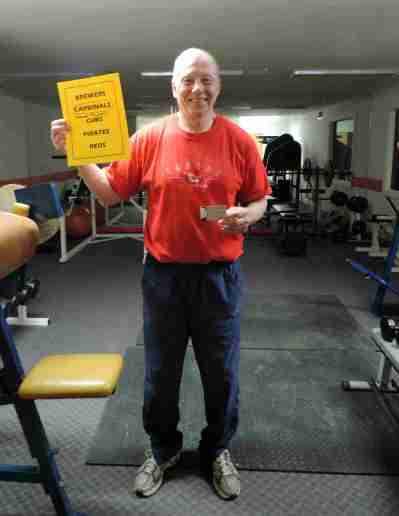 I found George working out at the local Racquetball Club in Orange.

George isn’t much of a baseball fan. Football’s his game. He was a defensive end at Virginia Tech and went on to coach at Tech, William and Mary, and 23 seasons at the University of Maryland.

While he claims to not follow much baseball, he was awfully quick to remind me that Tech’s baseball team swept the University of Virginia last month.

Why the Cardinals? No reason. 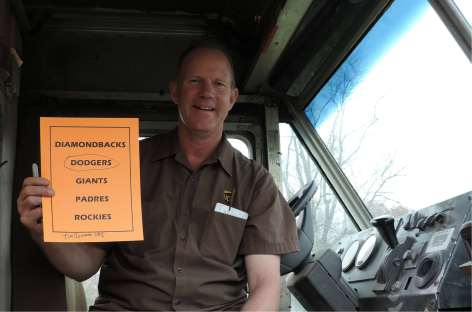 Tim is a longtime UPS driver. He has delivered all sorts of crazy things to us over the years, including this jar of official baseball rubbing mud … 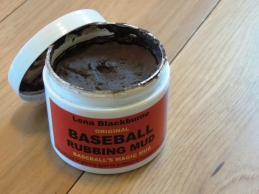 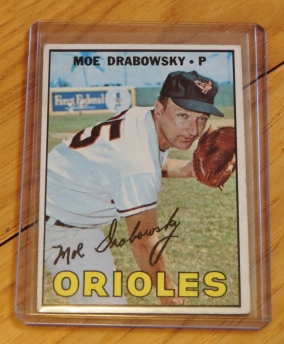 Tim was a pitcher in high school. He might watch a game or two during the season, but won’t really get interested until playoff time, when he and the 90 other UPS drivers he works with, including those who know nothing about baseball, will “start talking crap” about games.

Why the Dodgers? During the Lasorda Era, Tim would occasionally catch late night West Coast Dodgers games on TV.

With the divisions set, I took the remaining teams to my Wild Card experts, my two English friends, Chris and Michelle.

They became citizens last summer and are still getting the hang of this America thing. They still stick unnecessary u’s in words, insist that English chocolate is superior, and won’t admit that the U.S. bailed Britain out of two world wars.

Just the non-expert experts I was looking for.

Chris’s work with rock bands has taken him through a number of baseball stadiums over the years, so he knows his way around balls and strikes. He’s been to an actual game, but found it pretty dull. “I went one time. I’ll never go back.”

Why the Rangers? “They’re always there or thereabouts every year. I figure they could definitely be in the wild card market.” 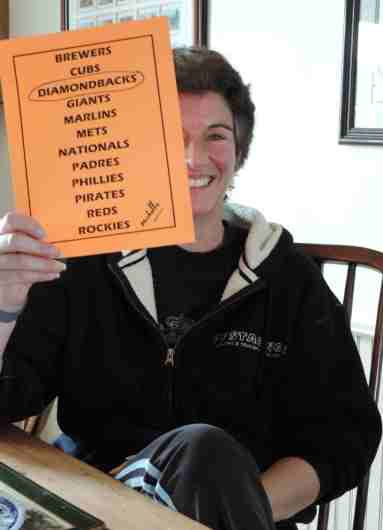 Michelle is a competitive equestrian, but is currently recuperating from an injury. She would like to point out she was a bit woozy while making her pick.

Here’s what Michelle can tell you about baseball:

1) It’s a cross between rounders and cricket.

3) They wear short pants and long socks, and

4) “In Boston, the Green Meanie is the scoreboard.”

(Dear Boston Red Sox, If you rename the Green Monster the Green Meanie, I promise I will stop posting this video every season.)

Why the Diamondbacks? “They were the longest name on the list.”

With the post-season set, we mixed the teams up in special American League and National League caps. 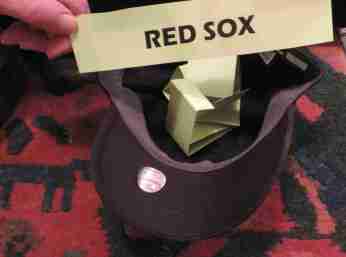 “I can’t believe I just picked the Red Sox.”

“I can’t believe I just picked the Braves.”

To pick a champion, I called upon the always adorable Stevie. Until a can of sardines learns to throw a baseball, she doesn’t care who wins. (But, she’s sweet on Mike Trout.)

She circled around the two teams a few times (perhaps signaling a five-game series? Or, maybe just looking for that can of sardines) before settling down next to the Braves and, in the process, knocking the Red Sox over with her generous backside. 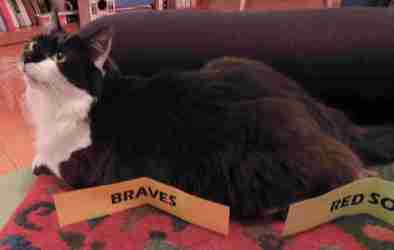 (Somewhere down in spring training, at that very moment, David Ortiz felt an unexplained heavy sadness come over him.)

And, that is why the Atlanta Braves will win the World Series. 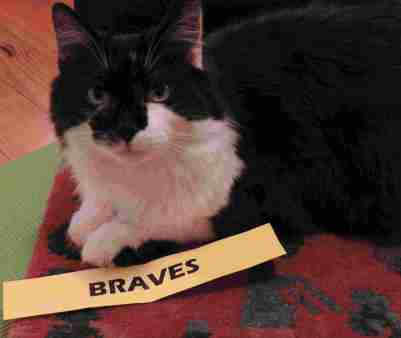 Still, it’s a little disappointing. Although I’m pleased that the Braves’ Nick Markakis, beloved former Oriole, will finally win a World Series ring, what fun is it now that the season is over before it has even begun?

Baseball is a beautiful, most perfect game. On Opening Day, every team is tied for first … at least for a few hours. Who can know who will win a World Series that is seven months and more than 162 games away?

14 thoughts on “My Experts Predict The World Series …”