Even flowers can bring you back to baseball.

Yesterday, Kassie, a massage client, walked into my office here in Virginia carrying a Mason jar of blooms. 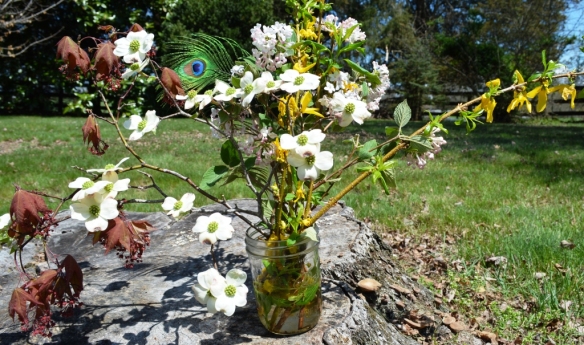 (It’s one of the great joys of being a massage therapist and yoga teacher – clients and students take such good care of me … bringing fresh vegetables from their gardens in summer, handfuls of flowers, and countless other kindnesses. They are wonderful.)

But, back to baseball …

I asked Kassie about each bloom that she had just picked on her farm that morning.

There were full-blooming white dogwoods, yellow forsythia (a bush I never knew until I moved to Virginia, where it is as ubiquitous here as grits for breakfast) tiny juddi verbernum flowers which made our porch fragrant like cinnamon this morning, a twig of Japanese maple leaves heavy with seeds, and a feather that a resident peacock had dropped in their farmyard.

She explained why the Japanese maple was so special.

Kassie grew up in Baltimore. Specifically, I knew from past conversations, she grew up on 33rd Street. If you know your Orioles baseball history, you know that before there was Camden Yards, the Orioles played for nearly 40 years in Memorial Stadium. On 33rd Street.

Public Domain by Jmj1000 via WikiCommons

I’ve often teased Kassie about not being a baseball fan when the Orioles were playing just up the street from her. Instead, she and her siblings would sit on their stoop and wave to the fans walking to and from the games. 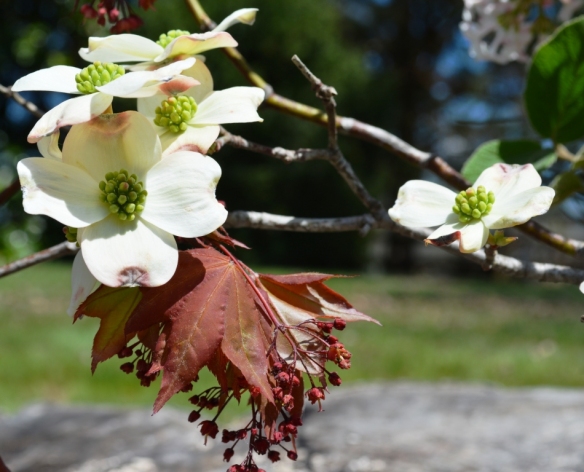 The maple twig in the jar, she said, came from a tree that once stood in her front yard on 33rd Street when she was growing up.

When her family left Baltimore and moved to a farm in central Virginia in the mid-1970s, her father decided the Japanese maple would move, too. It wasn’t huge, but it already stood a few feet high, and he carefully dug out the enormous root ball beneath. It made the transition from Maryland to Virginia and has been growing here ever since.

“So, you’re saying that this twig is from a tree that watched people walk to Orioles games in the 1960s and 1970s?” Yup.

Those years included amazing seasons when the Orioles were more dominant than the Yankees and in which the O’s played in four, and won two, World Series. As soon as the tree moved, the Orioles faded. Well, for a few seasons anyway.

This twig is a lucky Orioles twig.

Kassie thinks I’m a little crazy, but I love these flowers in their Mason jar, especially the Japanese maple twig. 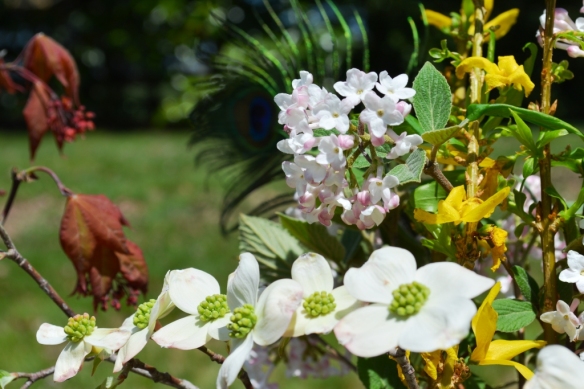 Her family tree was a seedling that came from their Baltimore neighbor who had a koi pond and formal Japanese garden in his back yard. I like to think that the original “mother” maple is still there on 33rd Street, even though the Orioles moved downtown 23 years ago.

Kassie has promised to bring me a seedling that is bound to sprout up underneath her family maple tree this season.

And, I will plant it and have my own 33rd Street Japanese maple in my yard.

This could be just the boost the O’s need to take them through October.

Thank you to Kassie for being a friend and for allowing me to tell this story, even though I’m pretty sure she thinks I’m loopy.

6 thoughts on “The Japanese Maple On 33rd”