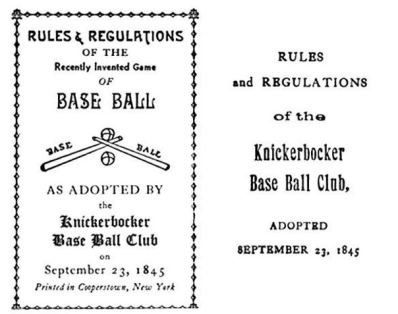 Before baseball even got to the bases, innings, or outs, there was an umpire:

“When assembled for exercise, the President, or in his absence, the Vice-President, shall appoint an Umpire, who shall keep the game in a book provided for that purpose, and note all violations of the By-Laws and Rules during the time of exercise.”

The only thing more important than an umpire? Rule #1 which reminds players to “strictly observe the time agreed upon for exercise, and be punctual in their attendance.”

So, let’s give umpires some love on Valentine’s Day …

First, don’t call it a clicker.

“[A] ball and strike indicator … figured in my very first lesson in how to be a professional umpire: Never call it a clicker. (Why? Nobody ever said, but, I guess it’s like an opera singer’s not referring to an aria as a song.)”  ~ Bruce Weber, As They See ‘Em: A Fan’s Travels In The Land of Umpires 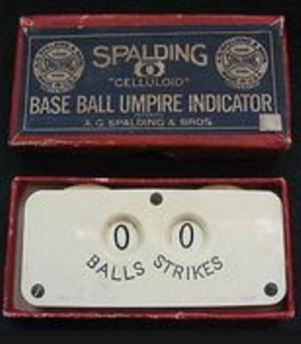 Don’t slug the umpire, even in the name of poetry.

Mother, may I slug the umpire
May I slug him right away?
So he cannot be here, Mother
When the clubs begin to play?

Let me clasp his throat, dear mother,
In a dear delightful grip
With one hand and with the other
Bat him several in the lip.

Don’t “smite him” with your parasol. 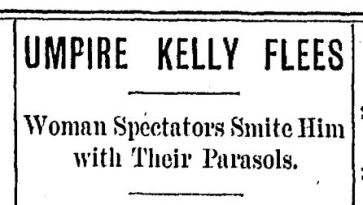 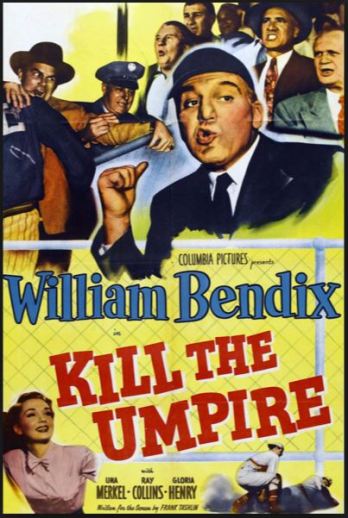 Fans have been threatening to kill the umpire since Casey at the Bat.

Let’s be nice on Valentine’s Day.

I don’t want to play favorites – playing favorites is not the “Umpire Way” after all. But, Valentine’s Day calls for a tiny little extra bit of love for legendary Umpire Bill Valentine. 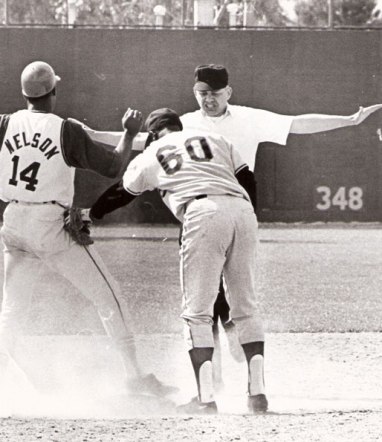 From The Encyclopedia of Arkansas History & Culture

He would proudly tell people that he was one of two umpires to eject Mickey Mantle from a game.

Valentine did eject Mantle on June 23, 1964 in a game versus Baltimore. Mantle was ejected in the ninth with two outs for “helmet-heaving.”

(Funny thing. The Baltimore Sun reports on the ejection; The New York Times never mentions it. By the way, the Orioles went on to win that game 9-8 and knocked the Yankees out of first place.)

But, Mantle was ejected from more than two games in his career. I counted six ejections between 1954 and 1968, and there could very well have been others.

Valentine was also the first umpire to eject Baltimore Orioles manager Earl Weaver. Weaver was ejected from at least 91 games in his career – an American League record.

Valentine started things off on July 30, 1968 tossing Weaver, just three weeks into the manager’s job, for arguing balls and strikes in the 8th inning of a game versus the Red Sox.

“Weaver chased Valentine all over the home-plate area in protest, finally having to abandon his shouting when Valentine took him to the stands behind the plate,” The Sun reported.

(The Orioles won 8-3, but not before Valentine also ejected O’s catcher Andy Etchebarren.)

Valentine was fired in 1968, along with fellow umpire Al Salerno, for “incompetence.” But, everyone in baseball knew the league fired them because they were trying to form a union for AL umpires (the National League umpires had unionized in 1963). The union was formed, the AL and NL unions merged, and the umpire union has been responsible for helping raise salaries and improve working condition for umps. 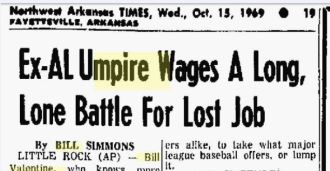 Valentine was born in Little Rock, Arkansas in 1932, just a few blocks from Traveler Field, home of the minor league Arkansas Travelers. He did odd jobs around the park as a kid, like sorting soda bottles, shagging foul balls, and helping in the clubhouse. He began umpiring in his teens and in 1951 was hired by the Class D Ohio-Indiana League, becoming, at 18, the youngest-ever professional umpire in baseball.

After his firing, he returned to the Travelers and became general manager in 1976.

He was known for his Veeckian-like promotions and giveaways – including Clunker Car Night, where used cars were given away throughout the game, a promotion that continues today, and midget wrestling, which also is still a thing at Travelers’ games.

One of his most popular attractions was a guy called Captain Dynamite who would lock himself in a box with sticks of dynamite and blow himself up. He was so popular that Valentine brought him back every season for 22 years.

You just had to see it, didn’t you?

Valentine called Travelers games, “The Greatest Show on Dirt,” which really annoyed Ringling Brothers and they made him change it.

As General Manager, Valentine wasn’t above belly-aching about the Texas League’s umpires. Here’s a voice mail he left complaining about one particularly persnickety ump.

Valentine retired from baseball in 2009.

He was named Texas League Executive of the Year six times and was inducted into both the Texas League and Arkansas Sports Halls of Fame. In 2014, Minor League Baseball awarded him the title “King of Baseball.”

Reflecting on his 60 years in baseball, Valentine said, “I enjoyed it. I really did. I actually enjoyed what I did. I wouldn’t change anything. I got fired by the American League, I wouldn’t change that. Because that turned me into something I enjoyed doing more. I really found something that I loved to do.”

Bill Valentine passed away in April 2015.

… From the benches, black with people, there went up a muffled roar,
Like the beating of the storm-waves on a stern and distant shore;
‘Kill him! Kill the umpire!’ shouted someone on the stand;
And it’s likely they’d have killed him had not Casey raised his hand.

With a smile of Christian charity great Casey’s visage shone;
He stilled the rising tumult; he bade the game go on …

Bill Valentine: The King of Baseball

A Tale of Two Umpires: When Al Salerno and Bill Valentine Got Thrown Out of the Game

23 thoughts on “An Umpire’s Valentine”