Eliot didn’t mean baseball. If he had he would have said August.

But, Eliot was a baseball fan and, it’s said, his heart was broken when his team, the Red Sox, sold Babe Ruth to the Yankees in 1919.

(Hemingway once slammed Eliot’s writing by telling a friend that Eliot “never hit a ball out of the infield in his life.” Also cruel.)

The Baltimore Orioles are slowly tumbling down the AL East ladder.

They’ve been looking increasingly listless and pitiful, like a ratty old tomcat trying to hack out a hairball. So much hacking and all that comes out is a desperate, sad noise that sounds, best I can translate, something like, “Ggggackuck [brief pause] Aahkgggackuck [longer pause] geeeeeeack.” Then he stops, swallows, shakes his head, and starts all over again.

I mean, you still love that ratty old tomcat, sure, but mainly you’re just hoping you’re not the one who’s going to get stuck cleaning up whatever is trying so hard to come out.

The Orioles were 11-14 in August through the 27th. Which doesn’t look that bad. It looks sort of average, I guess.

But, average isn’t good enough, you know that, and the Orioles are now third in the AL East.

The O’s were blown out twice by the Yankees this weekend. 14-4 on Friday and 13-5 on Saturday.

You don’t have to be a baseball scientist to know it’s not easy to get blown out in extra innings. 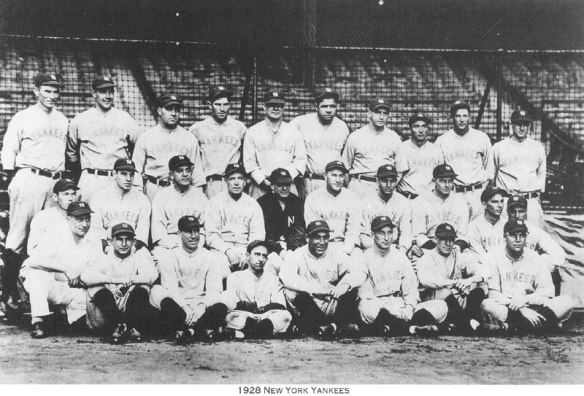 Then in the top of the 12th, 15 Yankees came to the plate. Two triples, three doubles, and five singles later, and it was 12-1 Yankees.

Babe Ruth had just one double and one RBI in five at-bats, but Bob Muesel hit for the cycle with 3 RBI.

(Editor/Husband will be interested to know that that 12-inning game took only two hours and 33 minutes.)

It had to suck to be the Tigers that day.

Or, maybe it only sucked for that one inning.

Because, that was just the first game of a double-header.

Tiger outfielder Harry Heilmann, an 0-fer in game one, had a grand slam, a triple, and 8 RBI in game two.

For the Yankees, that second game, The New York Times reported, “was a horrible exhibition, one of those married men-single men clambake atrocities where the final score is 23-21.”

I have no idea what that means, but if you do, I hope you’ll tell me, because I may need to use that line when September comes.

The Times concluded: “Gentlemen, it was awful.”

The Times was being melodramatic. The 1928 Yankees finished the season 101-53 and swept the Cardinals in the World Series. Things weren’t so bad.

This weekend, the Orioles re-signed lovable reliever Tommy Hunter, part of their AL East-winning 2014 team, who was cut loose by the Indians on Thursday. He pitched a scoreless inning for the O’s today.

The Orioles shut out the Yankees 5-0 this afternoon.  They’re still in third in the AL East with 32 regular season games remaining.

Gentle readers, at least for today … it wasn’t awful.