“Weather Has No Favorites; All Games Off”

It was 2-below this morning here in Virginia. Even colder in some parts of the state.

I know this because I, like many of my Virginia friends, took a photo of the thermometer. Evidence. It’s like a pseudo-selfie.

It was 117 degrees in Sydney, Australia yesterday. So, there are degrees of miserability. (Miserability. Not a word. Should be.)

On April 13, a snowstorm blanketed much of the east coast from Virginia northward. On April 14, it was still cold … and still snowing. Baseball season hadn’t officially started – Opening Day was four days away – but the teams were just back from spring training and exhibition games were on their calendars.

It was so cold and so snowy, they cancelled all the games. 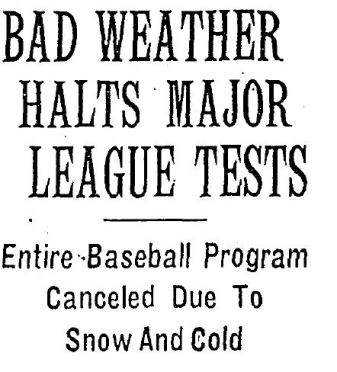 Even the Cubs-White Sox exhibition in Chicago was cancelled and you’d think a little cold would be no big deal to them.

The day before, with temps in the 40s, the Giants-Indians game went on in Kansas City and fans started small fires to stay warm.  Wait, what? You could do that?!

They also cancelled the Dodgers-Yankees game at Ebbets Field – a rematch of the 1949 World Series. But, someone, somehow, convinced a few Dodgers to pose – uncomfortably – for a photo with a snowman. (You can see in their eyes that these players are wondering if they get paid enough to do this.) 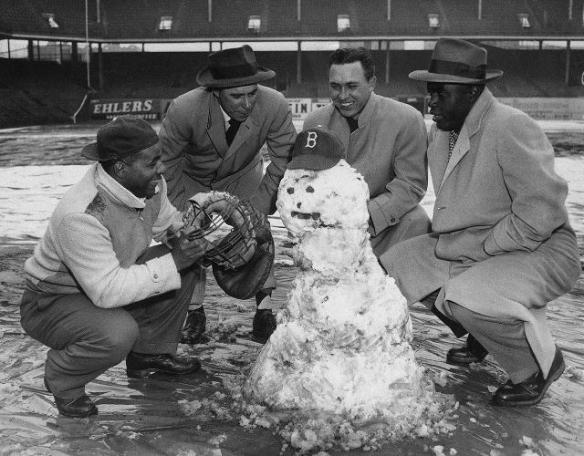 “The Dodgers showed up and promptly built a snowman on the pitcher’s mound and its fate was the same as most Dodger pitchers in recent years – it didn’t last long.” – Associated Press

Meanwhile, the day before in Pittsburgh, the Pirates-Yankees game was too cold for the young players, but 76-year-old Honus Wagner, then a Pirates coach, was at Forbes Field, despite the cold and despite a bad hip. “He was so homesick, he just had to get to the park,” his wife told a reporter.

Coldest major league game on record is thought to be the Atlanta Braves at Colorado Rockies on April 23, 2013.  Game-time temperature at first pitch? 23 degrees.

Now that teams are spread from coast to coast, and some even play inside, there’s very little chance that weather will shut down every game. Thank goodness.

In the meantime, there’s nothing funny about cold weather. Except this. 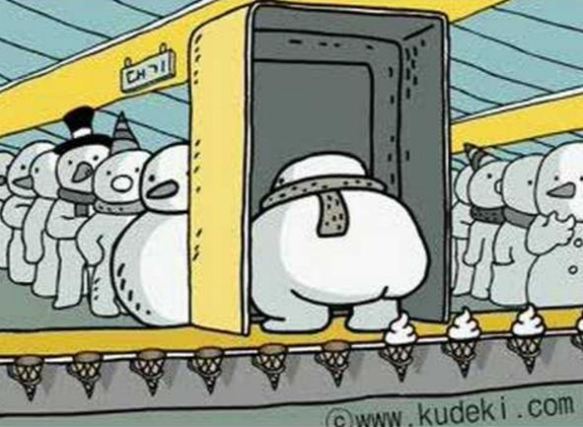 23 thoughts on ““Weather Has No Favorites; All Games Off””