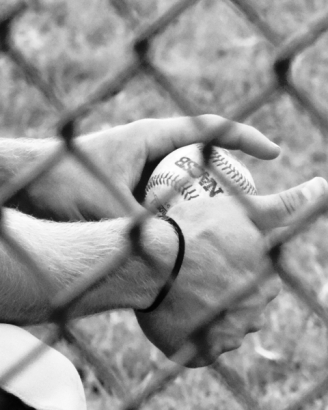 Is this what baseball will be, just hanging on to the memory of one last game?

The one game that you thought would go on forever?

The game where you sat, somewhere up in the stands. Tight up against those other fans.

Seeing what you always see and not wondering if you’d ever see the likes of that again.

A fan in the stands.

Game time 3:45 at old League Park. You know the place. The one with the beer garden.

They got so crazied up one day back in June that they threw their pop bottles onto left field. So many empty bottles rained down on Pittsburgh’s outfielder that the umpire had to stop the game. He asked a cop to stop the fans.

But, it was awfully hot. And, the cop would not.

And, just a few days ago, a fight broke out in the bleachers. Even the players stopped to watch.

That’s when the Cards put young Bill Chambers, a West Virginia kid, on the mound.

He gives up a hit, gets stung by an error, makes a bad throw to the plate, an unearned run scores.

Keep an eye on young Bill Chambers, that “well-built chap.”

Were you expecting more?

It was just a game. 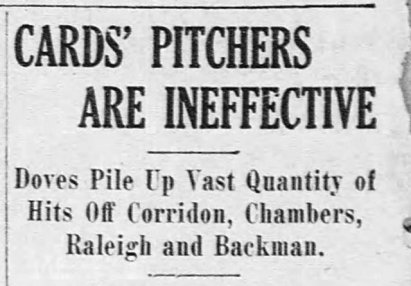 The Cardinals lose 9-6 and everyone blames the pitchers.

Bill Chambers, that young kid from West Virginia, pitches one inning, puts up one run. Unearned.

Blame everyone else, not me, for those other eight runs, he probably thinks.

The kid running the hand-crank scoreboard on the field lists Bill Chambers as Clemens for awhile. By the time the mistake is discovered, the inning is over.

And, there’s no photo left of young Bill Chambers, the pitcher the scoreboard kid called Clemens.

There’s nothing at all, really. Except the box score. 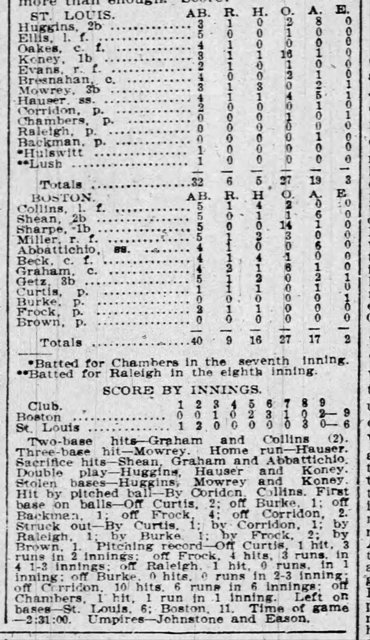 Did young Bill Chambers think that day would be it? Four batters. One inning in one lousy game on a partly cloudy Monday, a game the Cards had pretty much lost before he’d even warmed up?

Did young Bill Chambers think, “I better hold on to every moment of this, because this will be all there is to remember”?

Did he save the box score?

I wonder what happened to young Bill Chambers.

I wonder what baseball will mean to me now.

Will it just be that box score of that one last game, the one where I sat before everything changed?

Will I try to remember every moment of that game, because that will be all there is to remember?

Will I miss those strangers – those fans, those cranks, those bugs – who sat pressed up against me, nothing in common but our cheers?

Will they miss me?

I hope he did ok.