The New York Times just decided that reading words is passé. The future of the internet is audio and video. Even for a simple little blog like mine.

I’m just sitting in this blog all by myself, tapping out worthless words on a worthless keyboard counting …

The days ’til pitchers and catchers report.  Three.

The number of starting pitchers that the Orioles have on their roster. Two.

And, the number of people reading these words. One.

Qwerty, not so purty. (Poetry – even bad poetry — is screwed now, too, I guess.)

Sure, it’s ironic that The New York Times had to inform me that reading is dead using … actual written words.

Or, as you wordless people say …

What can I do to make you love reading again?

K is one of the alphabet’s resident hoodlums. Look at it slouched there lazy against its own wall – a street tough – sticking its leg out, just waiting to trip a non-suspecting sweet p, flipping it over into a d.

K is both letter, word, and complete sentence.

No more letters. No more Ks. No more backward Ks either.

When I was in junior high I filled up notebook covers while carefully developing two distinct signatures.

An upright formal “me” for signing important things on dotted lines.

And, a sporty name for notes to friends and autograph-seekers.

This was not slap-dash. This was serious.

No one wants my autograph.

Is this what it’s like to get old? Watching young people spit on things you think are important? Things that you love?

Sports Illustrated has cut back from weekly to bi-weekly. The magazine recently – correctly – used actual words to call curling one of the “most fun” Winter Olympics sports to watch.  This makes their publication cutback even more heartbreaking.

If there are any Washington Nationals fans reading, I’m also sorry to report that Nats catcher Raudy Read – the only man named Read to ever play in the majors – was suspended 80 games last week for failing a drug test. So, in your case, yes, I guess Read’ing let you down.

Raudy Read apparently didn’t read the part about drug tests in his contract.

Should I have uploaded this into a podcast for you so you could enjoy it without having to fill your eyes with annoying lettery-wordy lines, curls, and Oxford commas?

(I am bluffing. I have no freaking idea how to upload a podcast. Is it like radio?)

Stupid internet and your word-killing.

But, maybe this is just déjà vu all over again.

Did the ancient Egyptians whine that words were destroying hieroglyphics?

(Chin up, King Tut,  they’re back and they’re called emojis.)

Internet, you’re not the first word-killer.

Look at everything radio was going to destroy. (Warning: Words Ahead!)

(I know, George Bernard Show. Thank you for catching that.) 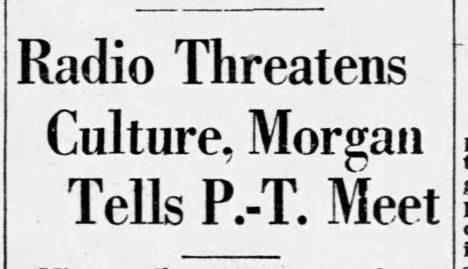 Newspapers, 1938. This crazy story said that there was going to be this gadget — called a fascimile machine — that every home would have. This fascimile machine — fax, for short — would send the news through radio waves to the machine which would print words out on paper.  Fax machines. Just crazy.

Alarm Clocks, 1938. (Let me explain this one — apparently new-fangled 1938 radios could wake you up by switching on automatically in the morning. Who needs a noisy alarm when you can have the morning news?)

Minor League Baseball, 1951. Because, who’s going to actually go to a minor league game when they can listen to a big league game on the radio?

Radio would have destroyed everything, too.

Except, television came along and it tried to destroy everything. Including radio.

Television was even going to kill sports, 1947. Which is kinda funny, because sports are the most-watched things on television.

But, teachers taught me to read. And, you too.

I still listen to radio. (Although sometimes I stream it on my phone and I’m a little embarrassed about that.)

Some of us even still read the box scores of baseball games we didn’t watch on TV, even when the video highlights are just a click away.

So, screw you, internet and your small-minded anti-readingism.

The internet did kill fax machines. I’ll give it that. But, it won’t kill reading.

Let me be clear …

(I know, the internet isn’t reading this. Just you. And, I want you to know that I think you’re great. I love the way your eyes move back and forth across the screen when you read. You have pretty eyes.)

But, just in case … here’s a little review …