Congratulations, Baltimore Orioles! You lost another game last night. But, if you’re going to lose, at least you did it in historic fashion.

If you’re going to be bad, be historically bad.

Oh, and the Reds won last night, so the Orioles are back to the being the worst team in baseball.

On April 29, the Baltimore Orioles won their last game, defeating the Detroit Tigers 5-3 at Camden Yards.

It was an unseasonably cool Sunday in Baltimore, the high just 56.

Somewhere in America, on that exact same day, in a clean stream of water, a mayfly was born. (The water must be clear and clean, mayflies hate polluted water.) 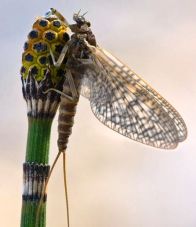 By Richard Bartz, via Creative Commons

This is not that mayfly, but it is a mayfly.

Ten generations of mayflies have passed since the Orioles last win.

If you bought a carton of milk on April 29, it has now expired. Please throw it out.

I will keep wasting people’s time with meaningless trivia every day until the Orioles win again. Who wants that? No one.

Can you win one? Just one? That’s all I’m asking.

Your Frustrated Friend, The Baseball Bloggess

12 thoughts on “The Orioles, Mayflies, And Milk”