There was a time – long before our time – when a housewife would set aside her entire Monday for doing the laundry.

I do a lot of laundry.

I have a washing machine that will agitate itself into a frenzy. I have eco-friendly laundry detergent and a dryer that runs extremely hot. With the exception of folding, I do very little.

It takes awhile, but it doesn’t take all day.

I still hate it.

But, I really would have hated it in 1895 when hours upon hours were spent boiling water over a fire and then scrubbing and rubbing and twisting out stains with caustic soaps and lye and turpentine until your hands turned red and peeled and bled.

Sure, the clothes wringer made washing day a little less back-breaking, but, as you can see, its biggest benefit was giving the wife time to get dinner on the table in time.

Doing the laundry in 1895 has nothing to do with baseball.

Until I found this …

“This wash-day scene is a sign of spring.” ~ The Baltimore Sun

Fourteen black Orioles uniforms were hanging to dry at the von der Horsts’ on a February day in 1895.

“Well, we don’t win many baseball games, but we sell lots of beer,” von der Horst once said.

So, thank you, von der Horst family, for giving us the Orioles of the 1890s – one of the greatest teams in baseball history.

Technically, your legendary team has nothing to do with the Orioles that lost 115 games last season. But, I’m going to go ahead and blame you for them anyway.

Maybe it was on the brewery’s roof that those 14 black Oriole uniforms hung to dry on that very cold early February day in 1895.

The high in Baltimore on February 6 was 11 degrees. It snowed. Those uniforms were probably more frozen than dried.

The day before, in a Baltimore neighborhood still known today as Pigtown, George Herman Ruth was born. 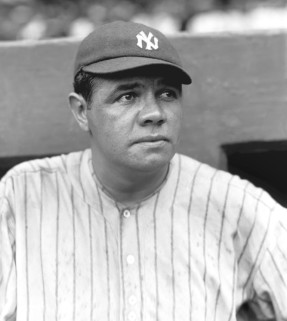 Baseball was still months away.

The previous October, the Orioles won the National League pennant and then were promptly swept in the Temple Cup by the New York Giants.

With only one league, the Temple Cup – where the league’s pennant winner played the team that finished second – was the closest thing the 19th century had to a World Series.

And, while losing the World Series is always disappointing (or so I am told), it must be even worse to lose in the post-season to the team that you were clearly better than in the regular season (again, I wouldn’t know).

And, so those old Orioles, the best team in baseball, ended their 1894 season being swept by the second-place Giants.

As The Baltimore Sun explains …

… they were still the best …

… And that is glory enough. Plus, the Temple Cup sucks.

(Let me remind you again that the 2018 Baltimore Orioles lost 115 games. Which is simply to say that my heartbrokenness is far more broken than those sad fans of 1895 could ever imagine.)

Going in to the spring of 1895, the Orioles had the makings of a legendary team.

Hall of Famers. Every single one of them.

And, there was Walter “Steve” Brodie who, while not quite Hall of Fame material, was a beloved outfielder who stayed fit each off-season by wrestling a muzzled bear.

Compare that to the current Orioles 40-man roster which ranges from “that name sounds vaguely familiar” to “are we really still paying him?”

Editor/Husband will need to come along. Baltimore’s Union Park in 1895 had a brand new grandstand – to replace the one that burned that winter – and ladies had their own segregated section with their own private entrance, but none were allowed to a game unescorted.

“Excuse me, I’m looking for the ladies’ entrance.”

As a stranger, I’m sure I’d get a little 19th-century side-eye from the other ladies there. We are all white in the grandstand. The colored section – uncovered wood bleachers – is far off from the grandstand.

No matter the humid, thick heat of a Baltimore summer, I will have to be covered in layers upon layers of clothing so heavy and snug that basic movement is a challenge. And, boots will button tightly to protect my ankles – but not the hem of my skirt – from the manure and sewage and film of filth that covers city streets in 1895.

Public Domain, via The Metropolitan Museum of Art

And, did I mention that soot and smoke and fetid air hangs over the 19th century like bangs on a bad hair day? Or, the regular outbreaks of small pox and typhoid and cholera and rabies?

Plus, I’m going to have to pass on the beer, I’m afraid, because a) I am a lady and b) there are, best I can tell, no public bathrooms at Union Park.

Those 1895 Orioles will get off to a miserable start, but will rally to win the pennant. They will lose the Temple Cup – again – this time to Cleveland.

And, there will be heartbreak in Baltimore.

The Orioles will not win the pennant in 2019. Their goal is to simply lose fewer than they lost in 2018. Even that will not be easy.

But, I’m still ready for spring.

I’ll keep my broken heart in 2019. We may lose 110 games this year. But, at least I’ll have my comfortable Yoga pants. And, indoor plumbing.