All this talk about sports returning — without fans — reminded me that we had a fan-free dress rehearsal back in 2015. At the time, I wrote this: “Little did we know that the game would set into motion the greatest sea-change in 21st-century baseball – the end of fans in the bleachers.” Ahead of my time, I guess. ~ The Baseball Bloggess

An empty Camden Yards in 2014. ©The Baseball Bloggess

Sure, I know why you’re here. You want to know what happened on April 29, 2015 – long before you were born – and how one game of baseball changed everything.

(But, before we get to that, let me tell you that I’m delighted that you still have, and enjoy, baseball in your world. We fans never believed the annoying naysayers who insisted the sport was dying. We knew they were idiots wrong. And, I’m also really proud of you for finally outlawing football at all levels because of the well-documented, long-term damage it does to players. Well done, Future World!)

We knew the game on April 29 would be historic before it even started. We just had no idea how historic it would be. And, how it would turn baseball on its head.

The Baltimore Orioles and…

On August 14, 2019, after their 82nd loss of the season, the Baltimore Orioles were officially eliminated from the postseason.

On the plus side, with the World Series now off my “to-do” list, I’m available throughout October for lunch at the restaurant of your choice. (Your treat, right?)

Nothing. I got nothing.

Your Weary Friend, The Baseball Bloggess 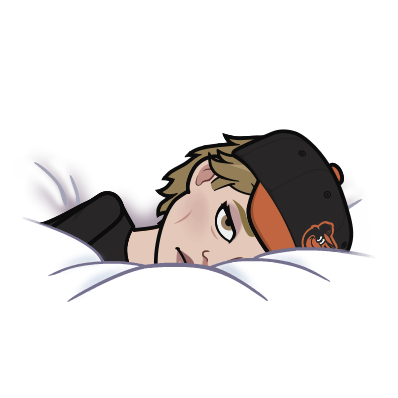 Would it make you feel any better if I told you I was sorry? END_OF_DOCUMENT_TOKEN_TO_BE_REPLACED

Silent movies are, well, silent … so you don’t need much from me this morning.

(From the movie The Cameraman.)

Hat-tip to @SABRPictorial for finding this gem.

P.S. The Baltimore Orioles have won their last three games. Their last 10 games? They are 7-3. Hoorah. Oh and speaking of Baltimore, don’t believe any of the cruel, hateful, and racist talk you may have heard about Baltimore in the past 24 hours. The Baltimore Sun replied …

“Everybody was becomingly thankful.” ~ The Baltimore Sun, November 26, 1897

There’s not a lot of baseball on Thanksgiving.

Sure, maybe there’s someone, somewhere having a catch before dinner. But, finding a game – a real game – is hard to do on Thanksgiving.

It was pretty much just turkey and football back in 1897, too. And, it’s been that way every Thanksgiving since.

But, I did find two bits of Thanksgiving baseball in 1897 …

On Thanksgiving Day, the boys of St. Mary’s Industrial School – the school for truants, miscreants, and wayward boys located on the outskirts of Baltimore – mostly played football. But, a few of them played baseball that day. It was a dull and cloudy day, but the rain held off until after dark, so the day was fine enough for outdoor games.

The school was still five years away from enrolling its most famous student – George (not-yet-Babe) Ruth who was committed to St. Mary’s by his parents for being incorrigible in 1902.

In 1897, George “Baby” Ruth was just 2 years old and several years away from becoming a star player for St. Mary’s Industrial School. (Here he is in 1913 — back row, center, with his catcher’s gear.)

They had just finished their season in second place and were out on the West Coast on one of those barn-storming “all-star” tours that travelled through warm-weather states in the off-season as a way to make the owners some dough and help players make ends meet.

The Orioles spent their Thanksgiving being beaten 4-3 by the Sacramento Gilt Edges, a California League team.

(The Gilt Edges, by the way, got their name from Sacramento’s Ruhstaller’s Brewery, maker of Gilt Edge beer. The brewery still exists and they still make Gilt Edge.)

But for most Americans, Thanksgiving Day 1897 was a day for church-going (“services were most elaborate affairs, and in their magnitude and importance, were only surpassed by the Easter Festivals,” The Washington Post explained) … college football (the University of Virginia beat Carolina in the “South’s Oldest Rivalry” game, 12-0, wahoowa!) … and serving roast turkey dinners with all the usual trimmings to the poor, the infirm, the elderly, and the imprisoned.

Thanksgiving Day back then, it seems, was less a day to count one’s own blessings, but instead was a day to help provide the less fortunate with a belly-filling meal for which they could be thankful.

The Humphrey House, a Jamestown, New York hotel and restaurant, reminded its diners of the blessings of sharing a meal with the poor on their Thanksgiving Day menu.

“They who divide the plenty, By a bounteous Father given, Shall multiply this day the thanks, That sweetly rise to Heaven.”

(You can see the Humphrey House’s full Thanksgiving menu here.)

As The Baltimore Sun explained, “Many generous-hearted people were anxious that others should find some rays of sunshine in their lives to be grateful for and devoted part of the remaining hours to aiding the poor, sick, or those confined in institutions.”

“Everybody was becomingly thankful.”

May we all be becomingly thankful today, too.

An empty Camden Yards in 2014. ©The Baseball Bloggess

Sure, I know why you’re here. You want to know what happened on April 29, 2015 – long before you were born – and how one game of baseball changed everything.

(But, before we get to that, let me tell you that I’m delighted that you still have, and enjoy, baseball in your world. We fans never believed the annoying naysayers who insisted the sport was dying. We knew they were idiots wrong. And, I’m also really proud of you for finally outlawing football at all levels because of the well-documented, long-term damage it does to players. Well done, Future World!)

We knew the game on April 29 would be historic before it even started. We just had no idea how historic it would be. And, how it would turn baseball on its head.

The Baltimore Orioles and Chicago White Sox played to an empty stadium that day. It was the first time that no fans attended a major league game. Baltimore was in turmoil (probably similar to the unrest and turmoil you have in your own cities, as some things, sadly, don’t ever seem to change). For the safety of the community, the game was closed to the public.

(Good job with the thesaurus, reporters.)

Let me clear up a few things. This game was seen by more people than would ordinarily watch an April baseball game on a Tuesday afternoon by two teams hovering around .500.

There was no room in the press box to handle the overflow of reporters who were clamoring to call the game “eerie.” There were cameras and announcers, same as always, sending the game out live on TV, streaming free on the Internet, and on radio. (Ask your grandparents to explain that radio part.)

The players enjoyed themselves.

People stood outside the ballpark peering through the gates or rented $300 suites at a nearby hotel to look down on the field.

It made the national news.

But, little did we know that the game would set into motion the greatest sea-change in 21st-century baseball – the end of fans in the bleachers.

I know this may sound strange (unsettling maybe, eerie, perhaps), but up until April 29, we fans thought we were indispensible. We cheered and chanted and carried on at games. We were certain that our cheers and boos could make a difference. We were the 10th man. Except we weren’t.

On April 29, we learned the truth. We were as disposable as a bag of stale sunflower seeds.

The game itself was pretty much like any other game.

The Orioles got off to such a fast 6-0 start in the first inning that I tweeted this.

Lots of O’s fans retweeted me. Because it was so, well, ridiculous.

The Orioles went on to win 8-2. Their usually unsettled starter Ubaldo Jimenez was eerily settled and dominating.

In the post-game press conference, Orioles manager Buck Showalter was asked: “Once the game started, how cognizant were you that there was nobody here?”

And, there was an awkward pause, a flustered and eerie silence, before Buck said, “That would be pretty self-incriminating. I can’t win answering that question.” And, then he said this, “It was still baseball between the lines.”

He wouldn’t admit it, but our absence hadn’t made a difference.

They hadn’t even noticed we were gone.

O’s first baseman Chris Davis tosses a ball … to no one.

As the 2015 season began, one of the big stories was how baseball needed to speed up its games. The average game in 2014 ran just over three hours.

The game without fans? Two hours and three minutes. An hour faster. Come to find out, we were the slow pokes.

Once owners and their accountants realized that they could play speedy games without fans and still turn a profit, our days were numbered.

We were downsized until we were gone.

And, that dear Future Person, is why there are no fans at your baseball games. Oh sure, the luxury suites are still there. Those were too lucrative to lose. But, no bleachers, no upper tiers, no lower tiers.

Without us there are no piles of peanut shells and spilled beer to clean up. No drunk fights to break up. No fan, walloped with a foul ball he didn’t see coming, to bandage up.

We were more trouble than we were worth.

Future Person, you’ll never know how wonderful it is to gather up the family and spread out at a game. To fill up on peanuts and popcorn and French fries and cotton candy (do you even know what cotton candy is?). To yell at the umpires, cheer the mascot races, root for the home team, and heckle the other guy’s outfielders. To soak in the summer heat or, even better, the chill of October, from awesome seats on the first-base side. To catch a foul ball or a home run.

I’m glad you still have baseball, even if you must watch games from the safety of your techno-televisiony-hologram devices. At least you have something.

And, I’m glad that scientists figured out a way to ensure that Vin Scully still calls Dodger games, extending his baseball career for hundreds of years to come.

But, I’m sorry about the empty games.

There’s not much time left for fans, I guess. I hope we make the most of it.

Far from the madding crowd’s ignoble strife,
Their sober wishes never learn’d to stray;
Along the cool sequester’d vale of life
They kept the noiseless tenor of their way.

Elegy Written in a Country Churchyard, by Thomas Gray. 1751