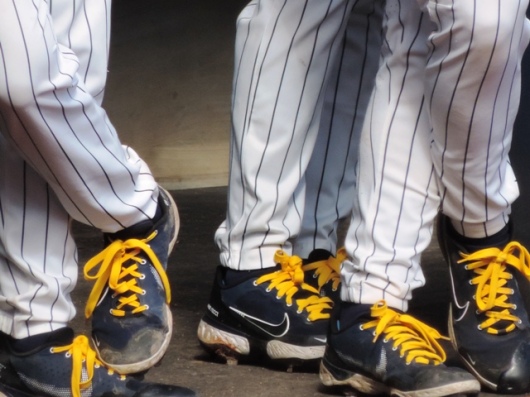 Oh, baseball, how I’ve missed you.

Maybe you’re waiting around for Major League Baseball and the Players’ Union to work through their cumbersome labor disagreements. (Spoiler Alert: one side is being an unreasonable, mean-spirited, nogoodnik cheapskate.)

I heard you unkindly harrumph-mutter “aluminum bats” under your breath just now.

Stop grumbling and have an open mind.

Sure, maybe the clink of an aluminum bat doesn’t have the same satisfying crackety’crack-crack of a wooden bat.  An aluminum bat also doesn’t explode into devil shards that can put out your eye. END_OF_DOCUMENT_TOKEN_TO_BE_REPLACED 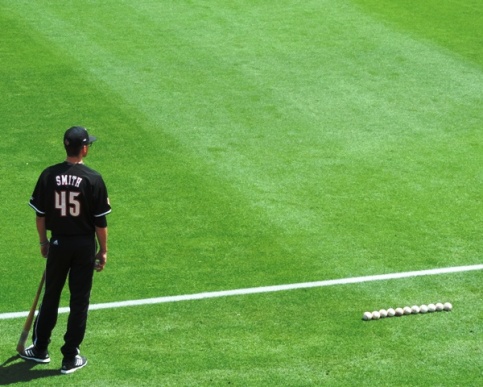 For this one brief moment, I can see summer spread out before me like outfield grass. Outfield grass that’s been so meticulously tended, sculpted, fed … loved … that it makes you squint hard for a second as you adjust to its blinding greenness.

Summer is a mile long, a mile wide. It reaches as far as the eye can see.

There is only baseball.

It is all I can see.

Thinking of twirlers with arms of smoked steel.

And, bunts. Don’t forget the bunts.

And, late-in-the-game outfielders floating at the wall and stretching and lifting higher and higher – and gravity is beyond my understanding and I guess beyond theirs too, because they float much higher than any other human possibly can – and with one final reach, one last elastic, impossible stretch, their glove barely, just barely, just just just …

… barely corrals that demon ball that saves the run that gives your team one more chance.

To prove just how over-the-top giddy I am right now and because all teams are wonderful on Opening Day … tell me who your team is in the comments below and I will tell you why your team is wonderful. And, I will mean it.

9 a.m. Update — It is Opening Day, except when it’s not. Rain has postponed the Orioles/Red Sox game. But, summer lasts forever … and there’s always tomorrow.

“Is it as good as you remembered?”

You know what I mean.

You go back to your old stomping grounds – your childhood home, your college campus, or that place where you did that thing that you did for the very first time – and you are sure you will conjure up the very same feelings, the very same wonder, the very same joy that whatever it was once brought you.

It never does, does it?

So when I write “Happy Opening Day” … as I write every year … I know there’s no going back to baseball’s old stomping grounds this year.

Opening Day has always been – should always be – a time of hope, a time of joy. Even when your team is crummy, there’s still hope, right? Maybe not as crummy? Not as crummy as last year.

You’ve got one team that doesn’t have a home to play in. Players opting out for their own safety. Empty stadiums filled with weird artificial noise.

But, as long as they insist on playing, I will make the most of it.

“Baltimore was bad last year, but this year it will be much worse. Its starting lineup is made up entirely of bums, retreads, and no-hopers. This team is more Major League than the movie.” ~ The Toronto Globe & Mail, April 27, 2019

It’s Opening Day and I believe in you.

Sure, I also believe in climate change, e.coli in my romaine, and menopause. These things do me no good, but I must believe in them because they are real.

But, I believe there’s more to you than just bad things.

I don’t believe you are made up entirely of “bums, retreads, and no-hopers.”

Sure, nearly half of your roster — 11 of the 25 players — are enjoying their very first Opening Day in the majors. I’m looking forward to learning all their names.

I believe that you all have worked up some crazy, ingenious, secret plan that will make you better … better than last year’s historic 115 losses. Better than what everyone else believes is possible.

I believe you’re going to try your best not to suck.

(I can’t believe I had to write that.)

I’m not sure why I believe in you, because it seems pretty hopeless, doesn’t it?

But, it’s baseball season and it’s nice to feel hopeful on Opening Day.

No matter what anyone else says.

I believe in you.

Your Pollyanna Friend, The Baseball Bloggess

P.S. Toronto Globe & Mail Sourpusses: You do know that the bums, retreads, and no-hopers of “Major League” won the AL East in that movie, right? On a bunt … a freaking beautiful bunt.

Before I unveil my fabulous 2019 panel of baseball experts and their equally fabulous post-season picks, I need to cover two important details.

First, the season has already started. The Seattle Mariners and Oakland A’s kicked it off last week with games in Tokyo, which counted for baseball, but do not count with me.

True Opening Day is Thursday, March 28. This is the earliest Opening Day ever and all 30 teams will play. This early start is to allow teams to scatter a few additional rest days into the season. (Need more rest days? Lose 100 games and you’ll get all of October off.)

Hi, SI guys. (And, by “guys” I mean, literally, guys, because girls are generally unwelcome at Sports Illustrated.)

Last year, my experts outsmarted the dude-fellas at SI who were sure the Nationals would win the World Series.

Neither did the Colorado Rockies, which was the team my cat chose. My cat.

Being outsmarted by my cat apparently did in SI, because there are a lot of words in their latest MLB preview issue (including calling the Baltimore Orioles “ugly” … twice), but no official World Series pick. Best I can tell, they will commit only to predicting the Dodgers will be the strongest team in the NL and the Astros, the strongest in the AL.

Are you SI, or are you SI’m Afraid To Be Wrong Again?

My 2019 panel of experts is clear that SI is wrong about the Dodgers and the Astros. And, as in previous years, my panel is awesome. END_OF_DOCUMENT_TOKEN_TO_BE_REPLACED

Sometimes I write for you. Sometimes I read and listen and watch stuff for you, so you don’t have to. (Isn’t that nice of me?)

Here are a few things I found. Think of them as Free Baseball* from The Baseball Bloggess – like the gift of extra innings that you didn’t expect when you came to the game.

After A Decade In Pro Ball, A Former Pitcher Goes Without Health Insurance

Public Radio International’s awesome Only A Game this week profiled Paul Wilmet, a pitcher who spent nearly a decade in pro ball, including playing three big league games for the Rangers in 1989. Today, he’s nearly blind but, with no pension, long-term health insurance, or benefits from his long baseball career, he’s been unable to get the surgery that could help him see again.

END_OF_DOCUMENT_TOKEN_TO_BE_REPLACED

If the last five months were the “Off Season” … is today the “On Season”?

It’s The On Season, Baseball Fans!

To be honest, I kinda like the off season. Everybody needs a reset and I like the anticipation of a brand new season … brand new possibilities.

Orioles waiting for the game to resume, August 2017 © The Baseball Bloggess

But, I’m glad we don’t have to wait anymore.

(Dear Beloved Baltimore Orioles, My amazing baseball experts don’t think you’re good enough to win the World Series. Nobody thinks you’ll do much of anything this year. But, I do. I believe in you. Please, don’t let me down.)

END_OF_DOCUMENT_TOKEN_TO_BE_REPLACED

“The Yankees will bash their way to the AL pennant. In the end, Washington will prevail, thanks to its stars – and, yes, a little luck.” – Sports Illustrated, 2018 MLB Preview

Sports Illustrated has never correctly predicted the World Series winner in its annual MLB Preview. Well, maybe they have. I don’t know. I got bored around 2010.

All I DO know is that my team of experts – first gathered in 2015 – has never been right and during that same period neither has Sports Illustrated.  To be fair, my panel has also included cats and, in 2016, a one-eyed possum and a crow.

(You gotta give SI credit … totally burned by the Nationals in 2013 and ’14, and they’re picking them again this year. Like Selena Gomez who can’t kick Justin Bieber to the curb, they’ve been screwed over – time and again – but SI just can’t quit the Nats. )

My experts can already tell you, SI will be wrong.

My crackerjack panel of experts – which includes people who don’t even like baseball – will probably be wrong, too.

But, my panel has another incentive: If their team actually wins their division – just their division, that’s all I ask – I will bake cookies for them.

Opening Day is Thursday. The earliest Opening Day ever. Because baseball is more fun when it’s 30 degrees and there’s snow on the ground.

No time to waste. Let’s get this World Series over with.

END_OF_DOCUMENT_TOKEN_TO_BE_REPLACED

A new season. Finally. And, not a moment too soon.

Can I wish for the World Series?

Well then, let me just wish for today. A day with some baseball.

Where all things are possible.

“An hour before Game 5, [Chicago Cubs first baseman Anthony] Rizzo has broken out his pregame inspirational and comedic presentation, quoting motivational lines from movies with no clothes on. The Cubs won, so Rizzo did it before Game 6, too. They won again, so he did it prior to Game 7 as well.” ~ Tom Verducci in The Cubs Way

There may be eight-million stories in the Naked City, but that’s city’s not Chicago and Anthony Rizzo won’t be Lady Godiva’ing his way to another World Series. Not this year anyway.

How can I be so sure?

Because my crackerjack team of experts told me so and they’re awesome, smart, incredibly good looking, and I believe them. (And, you want to believe them, too. That’s why you’re still reading.)